When plotting my first book, Darlin' Irish, I planned for my characters to meet at the Union Pacific Railroad Station in Omaha, Nebraska, and travel west on the U.P. I wanted them to stop somewhere along the route and spend several days there, giving romance a chance to bloom. Having the hero get wounded protecting the heroine provided a reason for their stopover, but where to stage the incident?

After hunting up a train schedule from the period, 1872, I chose Grand Island, Nebraska, as the setting. The town was a dinner stop, allowing passengers about 30 minutes to purchase and wolf down a rushed meal in the nearby eating house. It was also located far enough along the route to make it dark out when my characters arrived, uh-hum, after a conveniently staged delay back in Omaha.

While preparing to write the section about Jessie and David's stay in Grand Island, I researched the town's history. My favorite source was and is a book titled The Town Builders by Robert N. Manley. I ordered it from the Sturh Museum of the Prairie Pioneer, located in Grand Island.

In 1857, 35 German settlers traveled into central Nebraska from Iowa. They settled on an island called La Grande Isle, meaning large or great island - likely named by French traders. It lay between the Platte River and a narrow channel that branched off the main river. They arrived there on July 4 and by September had built log houses out native ash, elm and cottonwood timber. Over the next nine years, the settlers faced hardships including blizzards, conflicts with Native Americans, and among the Germans themselves, some of whom scattered, staking squatters' claims in the Platte River valley .

During this period, advocates for a transcontinental railroad agreed that the most practical route should follow that same valley, the path so many covered wagons had rolled along. There would also need to be feeder lines connecting major cities to the main trunk line, and it was thought a good place for these lines to meet the U.P. would be in central Nebraska, where Grand Island lay.

Eventually, Union Pacific surveyors laid out a town called Grand Island Station slightly inland from the island. Many settlers on Grand Island moved to the new town site. In 1868 the railroad arrived, bringing more business and settlers. By 1870, 1,057 people lived in the "new" town and in 1872 Grand Island was incorporated.

Grand Island never became quite the railroad hub envisioned by some or the nation's capital as other starry-eyed dreamers predicted. However, it did serve as an important stopping point for weary, hungry U.P. passengers, a fact I took advantage of in Darlin' Irish. 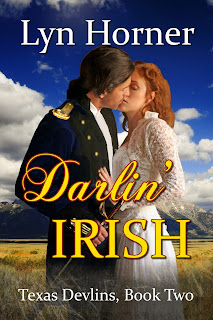 A sickle moon hung low in the blue-purple sky over , as Jessie ambled along the tracks. This was their first meal stop, and they were late due to the delay back in . Soon it would be pitch dark. And thank goodness for that! With the onset of evening, the heat had finally begun to let up.
The aroma of fried meat carried on the ever-present wind, coming from the nearby eating house, which was crammed to overflowing with ravenous passengers. They only had thirty minutes to wolf down their supper. It must be a regular bedlam in there.
She and Tye had already eaten from their store of food, as had others with little funds to spare. Her brother now stood near their coach, deep in conversation with the two would-be miners she had overheard earlier. Tired of listening to talk of silver mining, Jessie had slipped away, needing a few minutes alone, especially after enduring David Taylor’s company.
Aye, and after he’d finally returned to his coach, she’d had to put up with Tye’s maddening prattle. He had teased her, accusing her of being “taken with” the insolent captain and laughing at her adamant denial. Worse still, he’d asked if David Taylor might be the man she searched for, the man in her fateful vision. Naturally she had scoffed at the idea.
“Impossible!” she muttered, swatting a windblown curl out of her eye as her thoughts circled around the captain. She kept seeing that look of pity he’d given her. It still raised her hackles, but it also made her wonder. Might that spark of humanity mean he hid a softer heart beneath his steely exterior? She had told herself over and over again that he couldn’t be the gentle hero from her dreams. Was she wrong? . .

Lyn Horner is a multi-published, award-winning author of western historical romance and romantic suspense novels, all spiced with paranormal elements. She is a former fashion illustrator and art instructor who resides in Fort Worth, Texas – “Where the West Begins” - with her husband and a pair of very spoiled cats. As well as crafting passionate love stories, Lyn enjoys reading, gardening, genealogy, visiting with family and friends, and cuddling her furry, four-legged children.