CHRISTMAS RELEASES AND A GIVEAWAY! by Cheryl Pierson 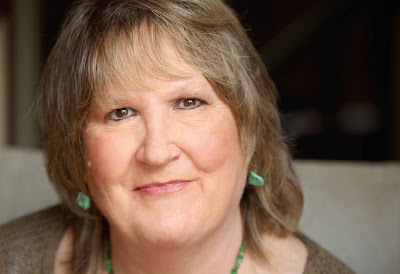 Hey everyone! The holiday season is upon us! I know--I'm saying "ALREADY?" right along with everyone else. I'm really excited right now because I have several new releases that all just came about at the same time--and let me say, I am THRILLED!

One of my favorite stories that is current is THE DEVIL AND MISS JULIA JACKSON. This was a story that started out as a short story, but I quickly realized there was more to it than that--and luckily, this summer I had a chance of a lifetime to spend several days a week with my 28-year-old son working on our writing projects together--he on his Masters' thesis in Engineering Physics and me on my ongoing writing projects, of which this was one. 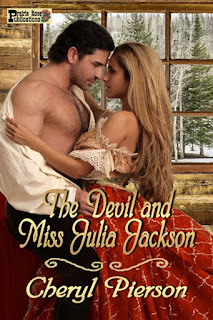 A woman with no home…
Beautiful Southern belle Julia Jackson has just been informed she and her niece must find a new home immediately—or else. With no family to turn to in Georgia, Julia takes a mighty gamble and answers an advertisement for a nursemaid in wild Indian Territory—for the child of a man she knows nothing about. Together, she and five-year-old Lauralee waste no time as they flee to the safety of the new position Julia has accepted. She can only hope this move will be the start of a bright future for them away from Lauralee’s dangerous much older half-brother.

A rancher with no heart…
The death of Devlin Campbell’s young daughter has ripped the light from his life. Though the birth of his son, little Jamie, should have been a source of happiness, the subsequent loss of his wife forces Dev to ignore his emotions and trudge through life’s joyless responsibilities. But all that changes with the arrival of Miss Julia Jackson from Atlanta! Not at all what Dev is expecting in response to his ad, his resentment boils over at her failure to mention her tag-along niece—a painful reminder of the loss of his own little girl just two years earlier. Yet, how can he deny the sunshine Julie brings into his drab existence with her very presence?

Can love find a way?
In the depths of Dev’s boundless sorrow and his accompanying anger, is there room in his life for anyone else as Christmas approaches? Can Julie convince him that love is the cure for a broken heart, and hope is the only recipe for a new beginning between THE DEVIL AND MISS JULIA JACKSON…

For the western reader on your Christmas list--or for YOURSELF--try this fantastic anthology of western short stories by a variety of authors--(yep, there's even a Christmas story in there by Big Jim Williams!) 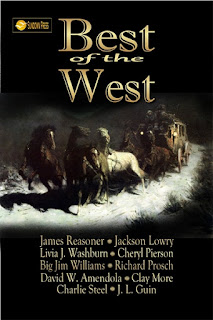 Grab a cup of coffee and settle down into your easy chair to ride the range with some of the most exciting tales of the Old West you’ll find anywhere! This collection is called BEST OF THE WEST for a very good reason—IT IS!

These fourteen stories will have you standing beside lawmen and outlaws as the bullets fly, saddling up some of the best horseflesh to be found West of the Mississippi, and wagering your livelihood on the turn of a card. Tales that include savvy swindles, gunfights, loves lost (and found!), the making of an outlaw and the secret protection of a president will draw you in and hang on tight.

GET IT HERE: AVAILABLE IN PAPERBACK AND DIGITAL!


The holidays are a time for SWEET THINGS! Right? Treats AND stories! Here's a collection that will definitely fit the bill--because not only are the stories sweet, this collection is complete with the recipes that are mentioned so that you can make all these scrumptious things for yourself at home! Take a look at SWEET TEXAS CHRISTMAS! 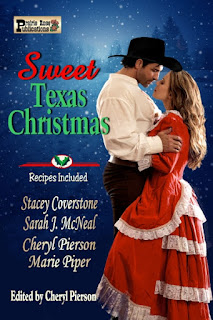 Christmas in Texas couldn’t be sweeter than these stories of lost love found and new love discovered at the most joyous time of the year! SWEET TEXAS CHRISTMAS is a boxed set of Christmas novellas that will warm your heart and keep you reading long into the night to see how these couples find their happily-ever-after ending!

With the holiday season in full swing, these western heroes and their ladies come together in a delightful collection of four deliciously sweet Yuletide stories you’re sure to love and remember. Authors Stacey Coverstone, Cheryl Pierson, Sarah McNeal, and Marie Piper have penned these scrumptious Christmas tales just for your reading pleasure, along with a special surprise in each story!

Each of these holiday tales includes a delectable dessert recipe guaranteed to bring an added measure of Christmas sweetness your way! There’s nothing quite like a SWEET TEXAS CHRISTMAS!

GET IT HERE: AVAILABLE IN PAPERBACK AND DIGITAL!


Does anyone love a good mail-order bride story? How about FOUR of them? Take a look at this wonderful set of stories--and these are all full-length BOOKS, not short stories, about the Remington sisters. This set is available for pre-order right this minute, and will magically appear on your Kindle on NOVEMBER 16! Best of all? The entire set is only .99 right now! 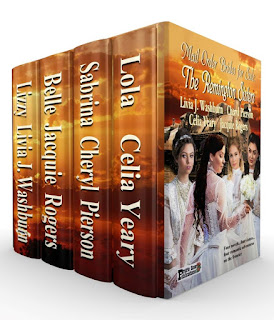 Brought up in the wealth and comfort of Eastern “old money” in staid and proper Philadelphia, the Remington sisters are forced to scatter to the four winds and become mail-order brides. In order to gain a fortune, their sinister step-father, Josiah Bloodworth, has made plans to marry them off in loveless marriages. Time is running out, and no matter what lies ahead in their uncertain futures, it has to be better than the evil they’re running from…

LIZZY: Livia J. Washburn
Elizabeth Remington’s world is turned upside down when she is forced to become a mail-order bride. With her cat, Fulton, Lizzy flees to Alaska—only to discover the man she’s to marry is not who she thought he was! Now, she must protect herself from the biggest danger of all—her own heart. Handsome Flint McKinnon has signed his soul away to her step-father, hasn’t he? He’s chased Lizzy across the continent, but can she believe him when he says he loves her?

BELLE: Jacquie Rogers
Belle Remington must marry someone before the dangerous Neville Fenster catches up with her. She hightails it out of Philadelphia to the wilds of Idaho Territory to become a bootmaker's bride, but when she arrives in Oreana, she discovers her groom has been murdered! Now, handsome, inebriated rancher Cord Callahan insists on fulfilling the marriage contract himself. Belle is beautiful and smart as a whip. But she has a secret. When Fenster shows up, can Cord protect the woman he wants to love forever?

SABRINA: Cheryl Pierson
Impulsive Sabrina Remington, the youngest, weds a man she knows her family would disapprove of. Though Cameron Fraser’s family owns a ranch in lawless Indian Territory, he’s made his way in the world with a gun, living barely on the right side of the law. With everything on the line as Bloodworth and his henchmen close in, will Cam be able to protect Sabrina from the desperate man who means to kidnap her for his own wicked purposes?

LOLA: Celia Yeary
Sensible Lola Remington, the eldest of the four sisters, must be certain the others are on their way to safety before she can think of fleeing Philadelphia herself. With the help of a local bridal agency, Lola finds the perfect husband for herself—in the wild countryside of Texas. Jack Rains owns a ranch and he’s in need of a bride—and children, of course! But just when Lola starts to believe there might be a future for them, she discovers a hidden letter from another woman…Jack’s first wife.

GET IT HERE: AVAILABLE FOR KINDLE!


That does it for my new releases until January, when I'll have an old favorite, FIRE EYES, included in a new boxed set grouping. Christmas is my favorite time of year, but mainly because I always carve out a little bit of time to just sit by the fire and relax with a good book!

Do you have a favorite Christmas historical romance? It seems I've read some that were strictly holiday themed, but the one that sticks in my mind most is A WALLFLOWER CHRISTMAS by Lisa Kleypas--I loved her "wallflower" series! What's your favorite Christmas romance? I'm starting another TBR list, y'all! Leave a comment and be sure to include your contact info for a chance to win a digital copy of SWEET TEXAS CHRISTMAS!
Posted by Cheryl Pierson at 11/28/2017

A Family Tree and Free Christmas Novella by Paty Jager


The first historical western series I wrote is the Halsey Brother Series. I wrote the first book not thinking about making it a series but when it published and readers wanted to know the other brother's stories it became a series.

The best and worst part about a series is watching the family grow. First there are the spouses, then as the stories progress adding years to when the first book starts, you also have to add children. When I ran out of the 5 brothers for the Halsey Brothers series and readers still wanted more, I used a brother of one of the heroines and then the two children from a first and second marriage of one of the heroines. That added three more novels and one novella to the Halsey family series and A Husband for Christmas was the last book.

To write the last book, I had to come up with a family tree to show the marriages and births to be able to bring everyone together for Christmas in the last novella. This tree doesn't show the marriages of Colin, Shayla, and Jeremy. Which are the books in the Halsey Homecoming Trilogy, along with Donny's book. He as a secondary character in Doctor in Petticoats who moved to Sumpter, Oregon with Clay and Rachel from that book. But using this tree helped me keep couples and children straight when the family arrives and at the table during meals. Yes, I had the whole family gathered for meals in a scene or two. That was an undertaking! I actually drew a table and made place cards on the table so I knew who was next to whom and how far down the table they would be looking to talk to another character. To me the staging is one of the fun parts of writing a story.
Now until the end of December, A Husband for Christmas is free at all ebook vendors. It is my gift to readers.
A Husband for Christmas 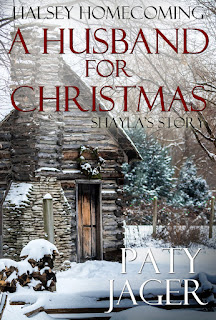 Final Novella in the Halsey Homecoming and Halsey Brothers Series

Shayla Halsey wanted to be home for Christmas, but never imagined her travels would include spending the night in a brooding stranger’s cabin. Snowballing events cause her to look inside herself and recognize maybe it wasn’t being home she wanted as much as it was to have a home.
Mace Walker has his life in order and doesn’t want it disrupted again. Yet, when he discovers a woman stranded in the snow, he has to help her—despite her overbearing and reckless fiancé. In a matter of days, Shayla turns his life upside down and forces him to decide if he should leave town or face the consequences.

click this buy link to go to your favorite ebook store

Paty Jager is an award-winning author of 30+ novels, novellas, and short stories of murder mystery, western romance, and action adventure. All her work has Western or Native American elements in them along with hints of humor and engaging characters. Paty and her husband raise alfalfa hay in rural eastern Oregon. Riding horses and battling rattlesnakes, she not only writes the western lifestyle, she lives it.