The History of Exchanging Valentine Cards


February is almost over, and Valentine’s Day has already come and gone, but seeing as how the holiday plays a significant role in my upcoming book, The Trouble with Lucy, I felt it might be a good subject to explore. I write in the multi-author series, The Belles of Wyoming, in which each round of books centers around a particular season or holiday. So the first five books were set in winter, particularly at Christmastime. The next five books occurred in the spring of 1881. In round 3, several more authors collaborated with us, and we published twenty books that took place in the summer of the same year. Now we are in the middle of round 4, with eight books centering around Valentine’s Day. My book is actually last on the schedule, so even though it publishes at the end of March, it will still carry a Valentine’s Day theme.

With that said, let’s answer this question. When did the tradition of sending your beloved a Valentine card begin? Any guesses?

My first thought was that it couldn’t have been very long ago, comparatively speaking. (I’m not sure why I thought this. I knew that Valentine’s Day originated from St. Valentine, a dude who lived many centuries before. And that was about the extent of my knowledge on the subject.) Interestingly, I learned through researching this holiday that a Roman Catholic priest named St. Valentine was sentenced to death for marrying people despite a ban which Emperor Claudius II Gothicus placed on him (because the men were supposed to go off to war). From his jail cell, he wrote a love letter to the jailer’s daughter, whom he had befriended, and signed it “From your Valentine.” This happened around 270-280 A.D.

Another piece of this puzzle is that Februa was the name of a cleansing ritual performed during this time of year as a part of other fertility rituals. (Thus the name of the second month, February, as we know it today.) This ritual morphed into a pagan festival called Lupercalia, which also focused on fertility. In 496 A.D., Pope Gelasius declared February 14th as a day to remember St. Valentine. It was marked as a day of feasting to honor the martyred saint.

From there, history becomes a little murky—at least, until we get into the 13th century. The great English poets Chaucer, John Clanvowe, and Oton de Grandson all mentioned "seynt volantyny’s/valentynes day" (Valentine’s Day) in their writings. Chaucer’s writings referred to birds calling out to their mates, which doesn’t happen until later in the spring but was believed in that time period to occur in mid-February.

Another poet that helped this tradition of exchanging Valentines get off the ground, though I’m sure it wasn’t quite his intention, was Frenchman Charles, duc d'Orleans. Born in 1394, he was a nephew to Charles VI, King of France. While held captive in the Tower of London during the Hundred Years’ War, he wrote a romantic missive to his wife, using “Valentine” as a term of endearment. Sadly, she died before receiving it.

Another love letter of import came in February 1477 from Englishwoman Margery Brews, who lamented that her father was refusing to increase her dowry, thus preventing her from marrying her fiancé, John Paston. (But only temporarily.) And then in 1600, Shakespeare penned a particularly poignant stanza in Hamlet, a romantic plea from Ophelia to become King Claudius’s Valentine. (Common consensus, however, suggests that she was crazy when she did so. That still counts, right?)

By the early 1700’s, hand-printed Valentine cards began to be exchanged. They were usually slipped under the door belonging to the person of interest. Printed verse guides were available for those who struggled with words. Around this same time, flowers also became a symbol of Valentine’s Day, and with the exception of the use of Cupids (angels), the holiday began to lose its religious meaning and took on a more romantic nature.

Finally, in the nineteenth century, printed cards became available, and postal rates became more affordable. As you might guess with the combining of these factors, the practice of exchanging Valentine cards went viral, so to speak.
Here is an antique Valentine’s Day card, which belongs to the John Johnson Collection in the Bodleian Library at the University of Oxford. Isn't it lovely? 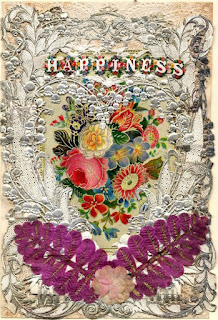 To see more of their collection, look here: https://www.pinterest.com/johnjohnsoncoll/

Nowadays, romantic images such as these pop up all over the internet, along with a plethora of websites where you may purchase antique Valentine cards—at the price of anywhere from fifteen to one hundred dollars (or sometimes more) for one card! 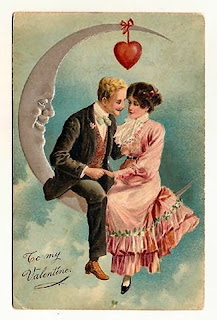 Whether or not you are a collector of these lovely vintage cards, one thing is sure—Valentine cards, flowers, and chocolate are the language of love! For my couple, Lucy Mae Jackson and Joel Turnpike, they may also be the thing that finally brings them together after fifteen years apart. But only if Lucy can stay out of trouble. And only if she will open her heart to love again.

Here’s the blurb for The Trouble with Lucy, book 38 in The Belles of Wyoming series. (Yes, she has been a minor antagonist in previous stories. Now we will find out why, and see if she gets her happy ending!)

When the gossip queen has the tables turned on her, there's only one thing to do--fight fire with fire.

It all started fifteen years ago with a bald-faced lie. When John Turnpike started paying attention to young and impressionable Lucy Mae Jackson, she thought it might lead to a marriage proposal. Instead, it led to heartache and such overwhelming humiliation, Lucy determined from that day forward she would never let anyone get the best of her again. Turning a sharp tongue on others before they could strike with theirs was the only way to protect her fragile heart. That, and ignoring John and his handsome but unpolished twin brother, Joel, until Joel finally decided to leave town.

Now someone is sending Lucy Mae anonymous love letters—right before Valentine's Day! Figuring it must be another hoax, Lucy Mae decides to take action. She must figure out who the prankster is while trying to avoid the townspeople's speculation. Or is her secret admirer John, whose wife has recently died and left him with four children to raise? Lucy might be willing to help him out if she can get him to say the words, "I love you." That's the trouble with Lucy—always jumping to conclusions, never thinking there might be another explanation—one that involves Joel. 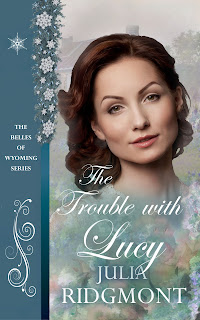 I hope you’ll give Lucy Mae Jackson a chance to redeem herself from past choices and mistakes. She has a good heart, as you’ll see when you read her story. You can preorder it here: https://amzn.to/2GGbdl0
Posted by Julia Ridgmont at 2/28/2020