Bank Robbers in the Old West

Books, movies, and television have made the west far more wild than it really was. I’d never claim that it wasn’t a hard life! It took courageous people to pack up and move west, knowing they most likely would never see the family and friends they were leaving behind.

However, truth be, there are more bank robberies per year in Ohio than there were in four decades of the old west—which includes 16 states. North and South Dakota, Montana, Idaho, Washington, Oregon, Utah, Wyoming, Colorado, Nebraska, Kansas, Nevada, New Mexico, Arizona, Texas and California. 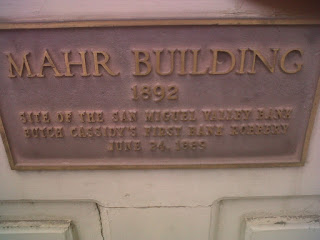 Yes, some bank robberies did occur during the frontier period, which is defined as the time frame 1859-1900. A few, such as Butch Cassidy robbing the bank in Telluride, Colorado and Jesse James robbing the bank in Northfield, Minnesota, were made famous. Telluride was Butch’s first bank robbery and Northfield was Jesse’s last. Butch and Jesse, as well as other outlaws, robbed far more trains and stagecoaches than banks, not necessarily because they were ‘easier’. The money on trains and stagecoaches was usually gold, or coins, which was easier to spend elsewhere in the nation than bank notes.

There was more of an epidemic of bank robberies during the 1920’s in the middle section of the old west states than ever before. Bonnie and Clyde and other such career criminals struck like lightening, sometimes hitting the same bank more than once.

In response to the robberies, rewards soared and bank ‘insurance’ was created. The insurance companies required banks to install security measures. A bank in Arizona installed teller-controlled tear-gas guns over teller cages, but had to have them removed after nervous employees had gassed too many legitimate customers.

One final number—According to the FBI an average of 4,000 bank robberies/burglaries occurred in the US per year. 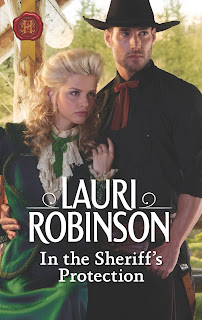 My latest book, In the Sheriff’s Protection, has Sheriff Tom Baniff chasing down a train robber.

He will protect her

But can the sheriff resist his forbidden desire?

Oak Grove sheriff Tom Baniff might be hunting Clara Wilson’s criminal husband, but that doesn’t mean he won’t help protect Clara and her young son from the outlaw’s deadly threats. When he invites Clara to his hometown, Tom is determined to keep her safe. But with her so close, can he resist the allure of the only woman he’s ever wanted?