Consider the time consuming process of making garments for an entire family by hand, one stitch at a time. And most likely, that sewing took place in the evening when all the chores were done, supper dishes cleaned, and the children in bed. Sitting close to the fire, or possibly a coal oil lamp, she worked away, often into the wee hours.

The first sewing machine was developed by Englishman Thomas Saint in 1791 to work on leather and canvas. It was never built. In 1830 a French Tailor, Barthlemy Thimonnier built a machine and had 80 in his factory where French military uniforms were made. Tailors afraid of losing their livelihood rioted and destroyed the factory.

These early machines used the chain stitch which were not very strong.

In 1833, Walter Hunt developed a lock stitch machine which used an eye-pointed needle, a shuttle, and stitched horizontally. The lock stitch was stronger than the chain stitch. There were problems with the feed. The machine had to be stopped and reset up. Hunt sold the machine without bothering to patent it. 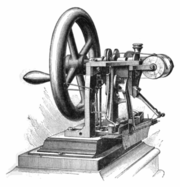 In 1842, John Greenough patented the first sewing machine in America.

Elias Howe patented his machine in 1845. His method was similar to Hunt's. He improved the needle and the material moved vertically. He traveled to England to promote interest in his machine and when he returned he found various people infringing on his patent. In 1854 he won the right to claim royalties from those using his patent ideas. The picture to the right is of Elias Howe's machine. Note the handle used to power the machine.

Isaac Singer, an engineer, thought the rotary sewing machine clumsy and designed the flying shuttle. The needle was mounted vertically and he added a presser foot, a fixed arm to hold the needle, and included a tensioning system. The machine combined elements of previous machines. He patented his machine in 1851. He was unable to patent the treadle as it had been used for some time. 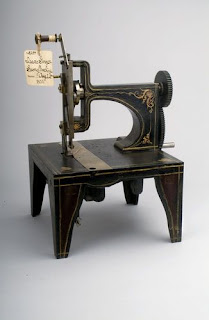 Howe took Singer to court and won. Singer had to pay him a lump sum of $15.00 for each machine produced and Singer took out a license under Howe's patent and paid Howe $15.00 for each additional machine produced.
Before 1890, the idea of women having sewing machines to aid them with their work wasn't well accepted. The feeling was women weren't capable of operating machinery. They were too excitable and not considered to be bright enough.

When it was first suggested Singer design one, his comment was, "You want to do away with the only thing that keeps women quiet - their sewing!" But, ready to make money, he went ahead and designed one that had many features of machines today. The first treadle Singer machine was introduced in 1856. To aid in sales, he used women to demonstrate the machines.

Singer became partners with lawyer, Edward Clark, and thus began the first installment credit plan which made sewing machines available to more women, the ones who couldn't pay cash for them. The year was 1856. They cost $100.00 and for $5.00, a woman could take one home with her that day and start to use it. At that time that amount of money equaled to the price of a car today. Some families went together to buy a machine and shared it.

Women were at last able to make garments much faster than in the past. Ease in piecing quilt squares, mending, and other domestic sewing chores freed women up for other activities. Though men feared they'd spend their free time playing cards, gossiping, or gadding about town, most probably got a little more rest or took part in charitable activities.

Thanks for reading. For you ladies out there who sew, thank goodness for Singer and the other individuals who developed sewing machines.