Author’s Notes: Stagecoach Lines on the Smoky Hill Trail in 1866 by Zina Abbott 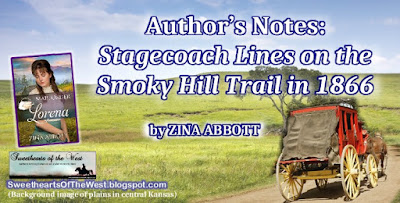 1866 was a very busy year when it came to ownership of the stagecoach and freight line that ran along the Smoky Hill Trail. David Butterfield built the Butterfield Overland Despatch stagecoach and freight line in 1865. It soon ran into financial trouble due to the losses of livestock, stagecoaches, stations, and employees as a result of conflict with the Native Americans, primarily the Cheyenne, who struggled to prevent any white men from crossing their lands and disrupting the migration of the buffalo herds.

Another large stagecoach and freight company that served the western United States at that time was Ben Holladay’s U.S. Overland Mail and Express Company along the Overland Trail. He held the cross-country mail contract awarded by the Post Office Department from Omaha, Nebraska to Salt Lake City, Utah.


Wells, Fargo and Company held the mail contract between Salt Lake City and San Francisco, California. Fearing encroachment by Wells, Fargo and Company in the form of them attempting to acquire the Butterfield line—thus putting them in position to capture the mail contract for the entire distance between the Missouri River and Pacific Coast—he moved to protect his mail contract and guard his hold over the stagecoach and wagon freighting ventures as long as there was money to be made in them.

Holladay sent out two inspectors (corporate espionage) to discover the financial condition of the Butterfield Overland Despatch. He knew the company had obtained a thirty year charter from the Kansas legislature for building and operating lines. Upon learning that the company was nearing bankruptcy, he pressured the then-president of the company, Edward P. Bray, to sell the line to him. In all, Holladay bought eight small stagecoach lines around that time.

In March, 1866, the Butterfield Overland Despatch became the U.S. Overland Mail and Express, Smoky Hill Division. Who knows when the changes were implemented, but the company’s records showed several stations with name changes, and there were changes made to which stations served as home stations and which were stock, or relay, stations. For the purposes of my book, I put that change effective the end of June, 1866.

Holladay had effectively blocked Wells, Fargo and Company from building a competing mail and wagon freight market between Denver and to the Missouri River using the B.O.D. line, but he knew the future was in railroads. He intended to hold onto his stage and freight lines only as long as he deemed them profitable.

During 1866, he realized the railroad construction across the plains was progressing faster than he originally anticipated. On July 3, 1866, Congress authorized the Union Pacific, eastern division, to extend their route across Kansas to Denver, which would ultimately make the Smoky Hill Division line obsolete. On July 30, the postmaster-general ordered Holladay to cut back mail service on his Overland line to thrice weekly. Shortly after, he was ready to sell.

Mail Order Lorena is the second of three of my books in the Widows, Brides & Secret Babies multi-author series. It is available on preorder and will be released on July 3, 2020.
The first book in this trio, Mail Order Roslyn, is currently available for sale and at no additional cost with a Kindle Unlimited subscription.
The third book in this trio, Mail Order Penelope, is also on preorder and scheduled for release on August 14, 2020. 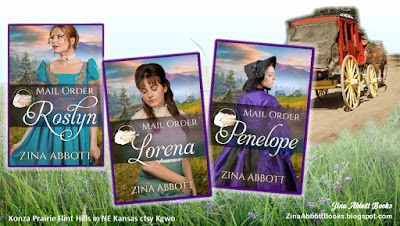 DO AUTHORS HAVE FAVORITE CHILDREN...ER, STORIES?

They say that parents should never have a favorite child.  It’s the same for an author. Our minds are constantly occupied with ideas that seem to nag us to death until we get them down on paper, then relief comes—for a little while, at least—before another idea bombards us. This is true for me most of the time. But there are a few novels that I’ve written where the main characters were so stubborn, they refused to speak to me—or to each other. These stories were not my favorites to tell, by any means, even though they actually turned out surprisingly well considering how much trouble they caused me.

Why am I mentioning this? Because this summer I’ve had the opportunity to revisit one of my all-time favorite fictional couples, two former Pinkerton detectives who were perfect for each other, and who worked so well together, they could practically finish each other’s sentences. Their names are Chas (short for Charles) and Jessica Bryant. Their story began in Virginia when Chas, a Pinkerton agent working out of Denver, recovered some stolen items from President George Washington’s Mount Vernon estate on America’s West Coast and then was sent back East to return them. There, a woman by the name of Jessica Flanders was having trouble of her own. She and her sister, Amaryllis or Amy, as she’s called, who was much younger than Jessica, had just become orphaned and Jessica’s ability to take care of her sister was being called into question by authorities. Thank goodness Chas stepped in at just the right time to help her keep Amy, and Jessica was able to help him catch a pair of murderers who had tried to weasel their way into full ownership of a successful horse-breeding operation. You may have read this story already, but if you haven’t, you can find it in An Agent for Jessica as part of The Pinkerton Matchmaker series.

Fast forward seven years. Amaryllis is sixteen years old now, and her best friend, Sarah, was engaged to marry a wealthy rancher from Denver. But at the last minute, Sarah decided to marry her friend from childhood, Mark Wilson. This was part of the plot in An Agent for Sarah, which released last month, and if you read it, you know there will be sparks flying in the next installment because now it’s Amy’s turn for a happily ever after. But not until she’s abducted first. Who should come to her rescue but none other than her nemesis, Sarah’s former fiancé, Derrick Baldwin?

Amy and Derrick don’t see eye to eye on a lot of things. Will they work together to find whoever is responsible for salting a mine and forging signatures on assayers’ certificates? Because of the nature of the story, and with it following parameters that were already set in Sarah and Mark’s story, An Agent for Amaryllis is quite a bit different than most of The Pinkerton Matchmaker stories that you’ve already read. (If you haven’t read any yet, might I recommend this multi-author series to you? It really is a fun one!) For one thing, due to a threat on her life, Amaryllis is forced to go into hiding. Quite conveniently, Derrick owns a “guest ranch” (another name for dude ranch) several miles out of town, so it’s the perfect place to keep watch over her.

With this being a historical romance, however, and societal rules being what they were in 1878, chaperones are needed. Naturally, I chose Amy’s guardians, Chas and Jessica, along with their three young sons, to step into this role. What follows is a spark-filled romance and merry chase as Amy and Derrick put the clues together to capture the bad guys and realize they hold strong feelings for each other. These characters were so fun and easy to write, their conversations just flew off the page. Amy and Derrick, along with Chas and Jessica, are admittedly among my favorite of favorites as far as my own literary couples go.

A couple of fun facts about this story:

1) According to my research, dude ranches didn’t come into existence until the 1880s, so I moved the timeline for them up a bit to fit the plot for An Agent for Amaryllis.

2) One way that miners used to salt mines was to place a small gold nugget at the end of a gun and shoot, letting fragments of gold splatter against the mine's walls. This sounds like the original version of paintball shooting.


I hope you’ll be ready to continue the saga of the Flanders, Bryant, and Packard families when An Agent for Amaryllis releases on July 10, 2020. These three books have been very rewarding to write. These characters feel so real to me, almost like family. I hope you enjoy their stories. 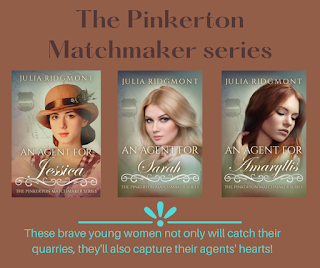