Ten Things You May Not Know About Blacksmithing

The blacksmithing trade has been around since the beginning of time and involves the forging or shaping of metal into useful or decorative objects. Heating iron to a certain temperature and then pounding it into shape before quenching it in water to cool is common practice. When I first decided to write the third book in my Brides of Hope Hollow series, that was about the extent of my knowledge on the subject. I knew that because my main character, Jake Mahoney, was a blacksmith, there was lots of work ahead of me! Below, I’ve listed several things I learned from researching more extensively:

1. Each town or village had a blacksmith. The blacksmith was what we would today call an “essential worker” and wasn’t only used for shoeing horses. A blacksmith was a true craftsman and could make anything from gardening tools like plows and spades to gates to decorative pieces. A blacksmith spent as much time repairing tools as he did making them. Blacksmithing, by nature, was hot and dirty work, but a profession that smiths took pride in nonetheless. The Industrial Revolution brought about the slow decline of this profession, though it is still a popular hobby today. One only has to type “blacksmithing” into YouTube’s search bar to bring up a plethora of interesting videos on how to make this or that. Modern-day blacksmiths are blessed with more advanced machines and tools with which to make beautiful objects.

2. Most blacksmiths made their own hand tools, which means that they were unique to them. And their set of tools were many. It would be impossible for me to name them all, but a blacksmith’s main tools are a forge, anvil, hardy/hardie (a sharp-pointed piece that can be placed into the hardie hole on the anvil to cut through metal when pounding), hammers of all kinds, including cross peen hammers and rounding hammers, a swage block, tongs, chisels, punches, and of course, a leather apron and gloves for safety.

3. Like hammers, chisels and punches come in a variety of sizes. They belong to a group of tools called “gravers” which are used to engrave metal. Engravings can range from basic to extremely intricate designs. As you can see from these pictures, various methods of engraving were used on these pieces. A variety of chisels and techniques were used to create the design in the center of the first tray, which you can find on this website for antique sellers and buyers. A punch was used to create the decorative holes around the edge. Punches could either punch completely through the metal, as it did with this piece, or it could be used to create indentations, as in the second piece below, which is found at Home Depot 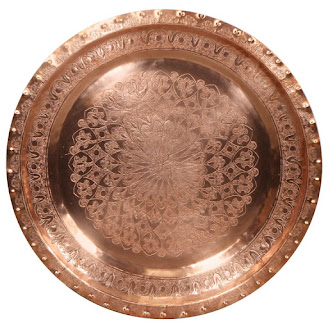 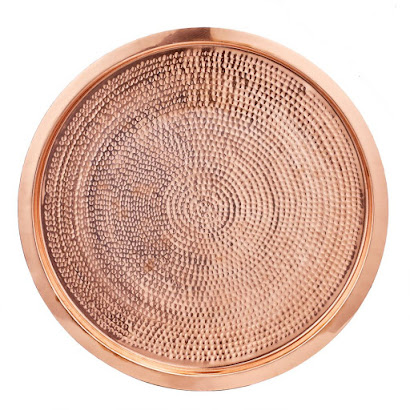 4. Before these were made, however, mined copper had to be purified and rolled into plates or sheets. You probably know that Paul Revere, who is most noted for his brave ride into Lexington to warn John Hancock and Samuel Adams of a British invasion, was a silversmith. He taught his sons the trade and employed several journeymen. He also printed (engraved) money for the new republic after the war. One lesser known fact about him, however, is that he later started the first copper-rolling mill in the U.S. as well a foundry. The copper he rolled was then used to plate the bottoms of ships. According to paulreverehouse.org, he firmly believed that copper sheeting should not have to be imported, and his endeavors added much-needed strength to the economy of his fledgling new country.

6. As you might imagine, blacksmiths develop their own rhythms when working. Oftentimes, a blacksmith will hammer a piece of metal for four or five beats and then tap the forge lightly as a way to give his or her arm a short break without losing momentum.

7. Several techniques are used to shape metal, including, but not limited to, drawing out (thinning and elongating it), bending, and upsetting it (pounding on one end of a piece to make it thicker). Swaging, in which metal can be shaped into certain widths and shapes from the swage block, is similar to casting in that regard, but it is done with cold metal rather than pouring hot, molten material into a cast.

8. Historically, armies employed a traveling blacksmith, who used a forge that had been fashioned on wheels. That way, they always had someone on hand who could repair saddles, spurs, guns, and other important equipment.

9. Perhaps the most important object that a blacksmith created was the common nail. It’s something we don’t think about these days, with the convenience we have of going to the hardware store to pick up a box of nails, but one hundred years ago, nearly everything was made locally, including nails. A small section of an iron rod was drawn out and then tapered at the end. The blacksmith then cut almost all the way through the piece with his hardie before twisting the piece off completely with a vise. A nail header was then used to thread the almost completed nail into before the blacksmith could pound the end of the nail to finish it off.

10. As you might imagine, female blacksmiths were rare one hundred years ago. According to workingtheflame.com, two noteworthy female blacksmiths were Elizabeth Bennett (not the one you’re thinking of, but just imagine if she had been one, hehe) and Betsy Hager. The most common reasons for a woman to pursue blacksmithing was either because she was trained by her father or she needed to continue working her husband’s forge after he died.

Even with just these ten facts about blacksmithing, it is such a wide and interesting subject! Understandably, I felt quite overwhelmed with the idea of writing a story with not one blacksmith in it, but three: Jake, my male protagonist, who was taught the trade by Alexandra Carter’s father, Oscar; Oscar himself; and, interestingly (I hope for readers), Alexandra. As part of my research, I, along with my daughter, also visited a local farrier and we were able to ask him several questions as he was shoeing his horse. It was a really cool experience! In addition, I stumbled across this wonderful poem by famous poet Henry Wadsworth Longfellow, entitled “The Village Blacksmith”, parts of which I included in my story since it’s found in the public domain.

Under a spreading chestnut-tree
⁠The village smithy stands;
The smith, a mighty man is he,
With large and sinewy hands,
And the muscles of his brawny arms
Are strong as iron bands.

His hair is crisp, and black, and long;
His face is like the tan;
His brow is wet with honest sweat,
He earns whate'er he can,
And looks the whole world in the face,
For he owes not any man.

Week in, week out, from morn till night,
You can hear his bellows blow;
You can hear him swing his heavy sledge,
With measured beat and slow,
Like a sexton ringing the village bell,
When the evening sun is low.

And children coming home from school
Look in at the open door;
They love to see the flaming forge,
And hear the bellows roar,
And catch the burning sparks that fly
Like chaff from a threshing-floor.

He goes on Sunday to the church,
And sits among his boys;
He hears the parson pray and preach,
He hears his daughter's voice
Singing in the village choir,
And it makes his heart rejoice.

It sounds to him like her mother's voice
Singing in Paradise!
He needs must think of her once more,
How in the grave she lies;
And with his hard, rough hand he wipes
A tear out of his eyes.

Toiling,—rejoicing,—sorrowing,
Onward through life he goes;
Each morning sees some task begin,
Each evening sees it close;
Something attempted, something done,
Has earned a night's repose.

Thanks, thanks to thee, my worthy friend,
For the lesson thou hast taught!
Thus at the flaming forge of life
Our fortunes must be wrought;
Thus on its sounding anvil shaped
Each burning deed and thought.

In Her Only Hope, when Jake left Oscar’s employ to work as a blacksmith on his own in a different town, Oscar decided to train Alexandra as he still needed an assistant. After Oscar is murdered by a man seeking revenge on his estranged son, Alexandra must find Jake. She knows the killer is after her, so she disguises herself as a man and goes to the Carters’ last known location for Jake, Hope Hollow. There she discovers that he’s been in a serious accident and that both of his wrists are broken. He needs a temporary assistant. Provident timing, right? Except that Jake is irritated by the fact that he’s in this position and needs her help. What’s a girl to do? 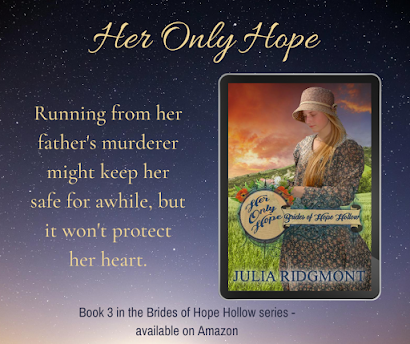 Find out in my book, Her Only Hope, which releases today! I’m really excited that this book is finally available for readers. Its original release date was postponed due to the world situation we find ourselves in and it was good to finally revisit this wonderful town and its interesting characters! I hope you will enjoy visiting there again as well.