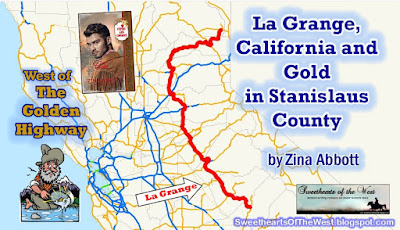 Gold was first discovered along the Tuolumne River in Stanislaus County, California, in about 1850 by a group of men from France. They named their camp French Bar since they found the gold on a sandbar in the middle of the river.

After a series of destructive floods along the river during 1851 and 1852, they moved about one mile upstream to get away from the flood plains. Their new community was founded in 1852. In 1856, the name of the town was changed to La Grange. One source says this was in honor of Lafayette's country home. Another source said it was in honor of General La Grange of France. (Joseph Burton Vasche) The name is French and means "the barn" or "the farm". The town prospered as both a mining and agricultural community.

By 1854, there were over 100 buildings in La Grange. For a time Bret Harte taught school here.

La Grange became the county seat of Stanislaus County in 1856. Aside from its French population, the community included a significant Chinatown in its early years. At its height, the community had thousands of residents, but it was a largely lawless town. As the gold mining declined, so did the population. In 1862, Knights Ferry became the county seat.

On June 3, 1869, John Muir departed Le Grange (French Bar) with a sheep herder and a flock of sheep and headed for the headwaters of the Merced and Tuolumne rivers. He writes the folloiwing in his book "My First Summer in the Sierra". In chapter one, Muir describes leaving French bar and moving with the flock into the hills near Coulterville. "This morning provisions, camp-kettles, blankets, plant-press, etc., were packed on two horses, the flock headed for the tawny foothills, and away we sauntered in a cloud of dust: Mr. Delaney, bony and tall, with sharply hacked profile like Don Quixote, leading the pack-horses, Billy, the proud shepherd, a Chinaman and a Digger Indian to assist in driving for the first few days in the brushy foothills, and myself with notebook tied to my belt. The home ranch from which we set out is on the south side of the Tuolumne River near French Bar, where the foothills of metamorphic gold-bearing slates dip below the stratified deposits of the Central Valley". In Many ways, this experience moves him so much, that he writes eloquently of the Yosemite area. His books are read by Americans including President Theodore Roosevelt. Muir becomes the face of a new conservation movement to save the Yosemite and creation of Yosemite National Park. [Source: "My First Summer In The Sierra", by John Muir - HOUGHTON MIFFLIN COMPANY 1917]

By 1880, mining had ceased with the exception of gold dredgers which continued to operate until the early 1950s. The dredging field extends westward from the town of La Grange along the Tuolumne River for nine miles. This district also includes a dredging field two miles to the south, on an older river channel, and surface "diggings" to the north. 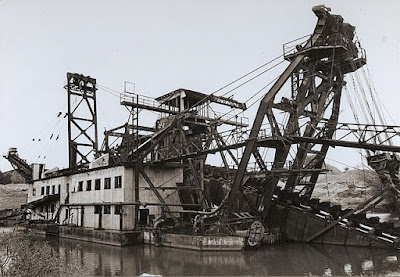 The above is a photograph of the Tuolumne Gold Dredge, also known as the "Gray Goose", in La Grange, California, taken in 1980 just before it was shipped to the Alaska gold fields.

La Grange is now a registered California Historical Landmark historic district. Today, a post office, a supermarket, an elementary school (as of fall, 2015, after a brief stint as a charter school, the public school was closed), and a High School (Don Pedro High School) still operate in La Grange. Also functioning is the oldest church in Stanislaus County, St. Louis Roman Catholic Church, with a cemetery containing tombstones dating to the mid-1800s. As of 2008 it has a population of 345.

What was a common occurrence in California counties held true for Stanislaus County. Its first county seat was Adamsville, a community along the Tuolumne River near where it joins the San Joaquin River, but it was shortly moved to La Grange in the eastern part of the county—the gold fields. The county seat was next moved a little farther west to Knights Ferry, also near where gold was found in Stanislaus county. In 1871, it was moved away from the gold-rich foothills to the brand new railroad town of Modesto in the valley. By then, the focus had turned from gold to agriculture. Modesto is still the county seat today.

In 1869, the year in which my novel, Cole, is set, both La Grange and Knights Ferry were active and well-known towns. Modesto did not exist. However, a secondary plot in this book is the struggle over who will be the power behind the railroad coming to this part of California.

To find the book description and purchase link for Cole, book 8 in the Cupids and Cowboys series, please CLICK HERE.

La Grange Historical Plaque, State Department of Parks and Recreation in cooperation with Morada Parlor No. 199, Native Daughters of the Golden West, October 13, 1984 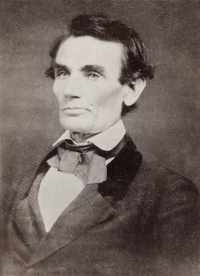 Recently, I was working on a project revolving around the game of baseball, and out of curiosity, I decided to look up the most expensive autographed baseball in history. Google pointed me to this article written by Jenny Chang in which she asserts that a brand new baseball signed by Babe Ruth sold for over $388,000 (though I’m not sure how the “brand new” part works since ol’ Babe lived . . . well, a long time ago). I found much more interesting—and ironic—autographed items listed in this article, however, such as a newspaper signed by John F. Kennedy right before he was assassinated and a photograph signed by Jesse James, which his granddaughter apparently gave up for hard cash. Wow, that’s harsh.

Among these anomalies, I also discovered an interesting fact about the Emancipation Proclamation that I suspect not many people know. President Abraham Lincoln didn’t sign just one copy of the famed document. He signed 48 copies, with 26 of them still in existence today. (The original draft, written by Lincoln’s hand, burned in the Chicago fire in 1871.) While most of the surviving copies reside in museums and other government collections now, a precious few are privately owned, with the record high for the purchase of one copy being $3.7 million.

What else do we know—or not know—about the proclamation? For starters, it was issued twice, first on September 22, 1862 as a warning to the Southern states who had seceded from the Union, which included Texas, Louisiana, Arkansas, Alabama, Mississippi, Georgia, Florida, South and North Carolina, and Virginia. President wasn’t wholly concerned about freeing the slaves, though it did bother him some and he wasn’t quite sure what to do about it. Rather, his main purpose for issuing the proclamation was to help the Union come together and he was prepared to use whatever means available to make it happen. Thus, this warning alerted the Confederate states they would be losing their slaves if they didn’t “cease their rebellion” by the first of January in the coming year. (Unfortunately, we all know what the Conferacy’s decision was.) The second issuing of the proclamation did, in fact, occur on January 1, 1863—and ironically, it did not free slaves that were within Union lines (for fear of those states erupting in ire as well). It only made provisions for those border states which were causing so much trouble. And by provisions, I really do mean that. Lincoln’s idea was to compensate the slave owners for their slaves. This idea didn’t go over too well, though. But this is something else I learned about the proclamation that I didn’t know before. Did you?

Lincoln had to use some fancy footwork to get this proclamation out to the people. First, he wasn’t technically within his rights to do so as President of the United States of America. Instead, he had to do it as the Commander in Chief of its army and navy. Also, his cabinet advised him to wait until the Union army secured a victory and the people would be more receptive to it. While the Battle at Antietam didn’t exactly result in the rout they wished for, it was enough of a victory to count, and Lincoln followed through on this course of action.

If the Emancipation Proclamation didn’t free all of the 4 million people enslaved at that time, what good did it do?

First, the Emancipation Proclamation effectively cut off Southern negotiations with outsiders like France and England, who abhorred slavery, thereby negating any assistance that might have come to the Confederacy. Second, it allowed people of African-American descent to join the army, giving the Union a much-needed advantage with over 200,000 enlistments. And third, the proclamation changed the focus of the war. At first, the two sides were fighting over states’ rights which included the question of what to do with the institution of slavery as it pertained to westward expansion. Once the proclamation was issued, however, the cause of freedom for all quickly gained momentum and in one of the bloodiest conflicts to ever take place on American soil, that freedom was won.

And here’s one more fun fact for you: The Emancipation Proclamation was signed by President Lincoln in the Lincoln Bedroom of the White House. At the time, however, it wasn’t a bedroom but an office which Lincoln used for his cabinet members. The walls were lined with war maps.

President Lincoln considered the Emancipation Proclamation to be his greatest achievement while in the White House, and it is easy to see why.

Several of my Christian historical western romances take place right after the Civil War ended, including An Agent for Jessica in the Pinkerton Matchmaker series. Though I don’t go into a great amount of war details, I like to explore the way this great conflict must have affected people’s lives afterward. Another book of mine that mentions battle scars of the mental kind, even years after the war, is The Christmas Switch, one of my personal favorites. If you haven’t had a chance to check these titles out, I’d like to invite you to do so. In addition to these titles, I’ll have another book, Buck’s Resilient Bride, to share with you which also touches on this subject.

Cheers for now and keep reading those historical romances that leave you with a feeling of warmth and belonging. 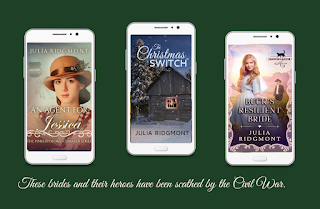