Happy New Year, Friends!
Since many of our holiday traditions in the United States came to our shores from immigrants looking for a better way of life for themselves and their families, New Year's was no exception.
Following the Civil War, parties, dancing, and festive spirits were staples of New Year's celebrations, just like today. Yet, there were many other odd, quaint, and charming customs that, for the most part, are no longer practiced today.
Matchmaking
Wealthy folks would hold "open houses", inviting all the local eligible bachelors into their homes to meet their unmarried daughters...similar to today's speed dating! The bachelors would spend about fifteen minutes chatting with the unmarried daughter, provide her with his calling card and move on to the next home. If interested, the daughter would call upon the bachelor for another visit to talk and to meet her family.
In New York City, young men would race around the city to visit (call on) as many young women as possible. By the 1890s, the custom had fallen out of fashion in in favor of more exclusive New Year's Eve parties. 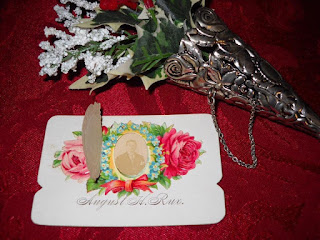 The calling card to the left is that of Mr. Augustus Rux (pictured on the card). Apparently, he was successful as he married Mary Beck in 1916. They had two children together.
New Clothes
While many people didn't have the means to purchase a new outfit to wear on New Year's Day, women and girls often tied ribbons in their hair. Pioneer men might sport a new kerchief to symbolize fresh beginnings, and leaving of all the past year's hardships.
The Threshold
The threshold represented the crossing from one year to the next. At the stroke of midnight, the front door was flung open, and one greeted the new year with shouts of "Welcome!" The head of the household would take three bits of bread before throwing the loaf against the door while those gathered prayed "that cold, want or hunger might not enter" in the coming year.
If the first visitor of the year to cross the threshold by stepping into the home (whether family or friend) had dark hair, it meant good fortune was ahead for the family. If the person had blonde hair, it meant troubles loomed.
Pigs and Clovers 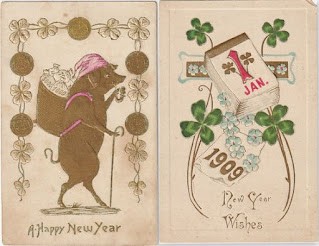 Postcards were often sent to and from loved ones, a number of them containing pigs and clovers, as they were considered bearers of good fortune for the year ahead.
Cleaning the Hearth
Cleaning out the ashes from the hearth was completed on New Year's Eve as a sign of sweeping away all the past year's misfortunes and ushering in the new year with a clean slate.
Divination
People would playfully predict one another's fortunes for the new year interpreting each other's tea leaves, and by engaging in opening the Bible to a random page. Known as "dipping", the player would, without looking, point to a particular passage. The selected excerpt was thought to predict the good or bad fortune of the person doing the dipping. 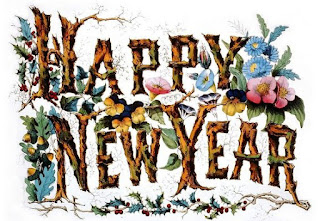 Bell Ringing
Many towns and cities rang bells at midnight to chase away evil. This may have led to the present-day tradition of noisemakers and party horns.
The tradition of ringing in the new year at Times Square in New York dates back to December 31, 1904.
In 1904, the New York Times newspaper moved their location to Longacre Square.  To mark the joint celebration of its move, a name change to Times Square, and the impending new year, thousands were invited to the festivities.
Shortly before midnight, dynamite exploded as a signal that fireworks were set to begin, and the giant numerals 1 - 9 - 0 - 5 were illuminated atop the New York Times building in the direction of theaters, hotels, and restaurants downtown. This annual celebration with fireworks continued for the next two years.
In 1907, New York banned fireworks and a new way to ring in the new year was sought. It was decided a ball, constructed of wood and iron, and illuminated with 216 electric lamps would signal the new year. 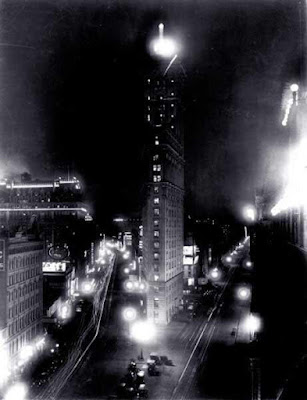 New Year's Eve, 1907. The streets were blocked off from traffic and the crowds kept back to ensure safety for all visitors, hence the scene seems bare.
The ball has changed locations through the years, its move to its current location at One Times Square in 2009. The dropping of the ball has been an annual tradition in Times Square since December 31, 1907, the only exceptions being 1942 and 1943 in observance of wartime blackouts.
Although many of these traditions are obsolete or have morphed into something different, opening one's home, along with special foods served and enjoyed on New Year's has lasted for generations. My wish for you is still the same as those who have gone before us...luck, good fortune, prosperity and health throughout the coming year. 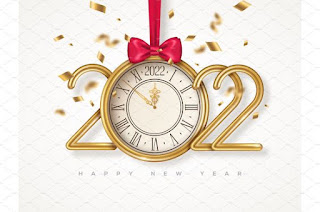 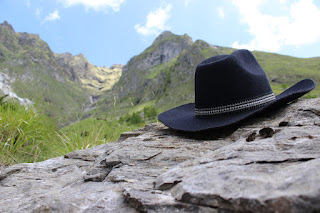 Not too far from me is one of the greatest places on earth. It’s a big used (and some new) bookstore just perfect for finding interesting books. It’s a great way to find specific books, but my favorite thing is just to wander. Upon one recent expedition, I found something perfect for a book/word nerd. The Dictionary of the American West by Will Blevins can provide you with many useful terms to fit in if you are magically teleported to the Old West or if you just want to learn and use a few more colorful phrases. Some of  the definitions in the book are for more modern cowboys, as well.

Here’s a sampling to get you started:

Back East: The reverse of out West. For some, it had the implication of being ‘back in civilization.’ For others, it meant “back where everything is messed up.’

Belly Gun: A short-barreled pistol stuck naked into the waistband of your pants instead of holstered

Cash in His Six-Shooter: What an outlaw was said to do when he used his pistol to withdraw money from a bank

Leaky Mouth: Someone who is too talkative

Mail-Order Cowboy: A tenderfoot decked out too fancily in what he hopes is cowboy clothing

On the Dodge: On the run from the law

Pie Buggy: A wagon sent to town for supplies

There’s a One-Eyed Man in the Game: someone is cheating at poker 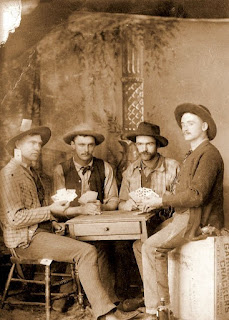 So put on your bat wings (chaps), saddle your horse,  and go out and use a few new expressions today. 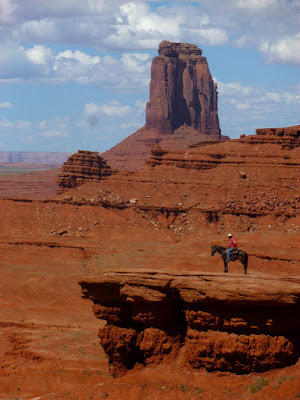 For the first few weeks of each year, I walk through life with a deep sense of gratitude. Today I'm thankful for all my wonderful colleagues who also write historical western novels.  It's a language that a good deal of the world doesn't speak.

Julia Ridgemont spoke of her latest work that takes place in Denver. My Native American books have unleashed fervor I didn't know existed in me -- especially during the sub-zero Nebraska winter. I'm convinced that overlooked details that paint stories are key for bringing the 19th century to life.

I enjoyed Caroline Clemmons' article about the Comanche scalping of that poor fellow: & it was exactly what I've unearthed. Comanche stripped and scalped settlers at the very least; and their movements were swift. Comanches were in charge of the southern plains (like Texas). Unlike the other tribes, they weren't driven from the east of the country because of crowding. They simply saw better prospects on the plains. They treated other tribes with the swift brutality that settlers received in order to gain control of the southern plains. 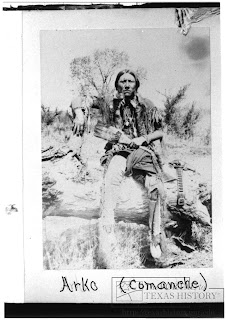 Cheri Kay Clifton wrote that sounds of nature and the wildlife can stir curiosity in readers.  My readers seem to enjoy these Native books. Hopefully the details of every day tribal life, ceremonies and dances are part of it.

I'm not sure how I'll convey the prosperity this Comanche chief shows; others have said the same: Comanches always had money, always had plenty to eat and share, wore good clothes, spoke several languages. But he'll make an excellent antagonist -- guns and all.

The man to the left is in Oklahoma. I've sat on rocks like that myself.  I was surprised at the layers of fringed and finely decorated garments he wore.  Like other plains tribes, Comanches often had several wives. (I wondered how many women  sewed the fine clothes and moccasins he wore and if their needles were animal teeth, as was reported. Certainly they'd tanned the hides.)

However, Comanches weren't vindictive if their wives were stolen (tribal women were in demand,just like settler women), or if they ran off.  They seldom tried to recover their errant wives, though occasionally they'd ask the new husband for payment.   (Other plains tribes deformed the runaway wives, cutting off noses and ears.)

The site where I got this photo is Texas History. The photo belongs to the Rescue Texas History program. They offer a useful zoom and good downloads.

For example, the gun belt, holster and gun to his left, resting on the rock can be seen without a zoom. More difficult to see is the arrow on his right thigh. Besides being aggressive raiders, Comanche thought about the long term effects of trade.  When they arrived on the plains, they'd immediately allied with the French fur trappers and traders, for metal objects like guns, ammunition, metal arrows and knives, but also for creating allies.  The French traders were eventually driven from America, but they'd married Natives. 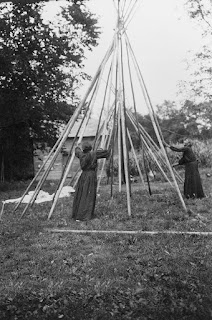 Native women putting up a tepee 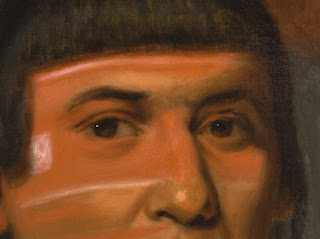 No-Tin, Chippewa chief
But for my romantic hero, I didn't want fierce looks or gun belts.  I found him on Useum.  This portrait was commissioned by the US govt. for promoting peace with the tribes.  The government asked a  hundred chiefs to Washington D.C. and asked portrait artists to capture their likenesses.
My romantic heroine? Her sister Vera, in book 1, married a Lakota man, Black Wolf.  This must be a trope:  Lucy, Vera's sister, is in love with Elk, Black Wolf's brother.  Here is one painting that inspires me to create Lucy and to write yet another demanding romance novel. 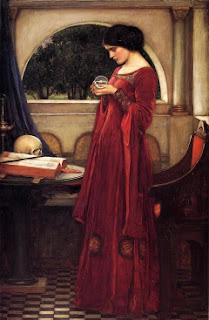 Thank you all for your interest, and thanks to all my author colleagues for their inspiration and guidance. 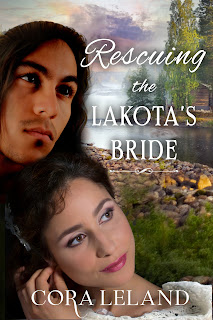 0 comments
Email ThisBlogThis!Share to TwitterShare to FacebookShare to Pinterest

WILDLIFE IN THE AMERICAN WEST By Cheri Kay Clifton

As western authors, we know that settings are as important as our characters and plots. We want our readers to get a clear and vibrant sense of the western location in which our story takes place.

One way I use to engage my readers and enhance the believability of my fictional books is to be sure to include the sights and sounds of western wildlife common to the story’s location, be it in the prairies, great plains, mountains, or deserts.

For you reference, below is a compilation of commonly found wildlife in the Western United States.

HAPPY NEW YEAR & THANKS FOR STOPPING BY! 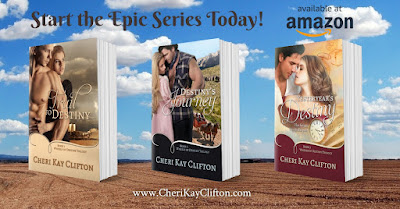 Book 1, Trail To Destiny - A turbulent cross-country journey of heated passion, bitter vengeance and a haunted past lead Grey Wolf & Laura Westbrook on their Trail To Destiny.

Book 2, Destiny's Journey - Family deception kept Jennifer O’Malley from marrying her first love ten years ago, West Point officer, Glen Herrington.  Now a Civil War widow, she leaves war-torn Richmond, determined to find her destiny.  She makes the long journey west in search of Glen, only to discover he is a notorious outlaw with a price on his head.

Book 3, Yesteryear’s Destiny - When Angela Moore skydives out of a plane and into the western frontier of yesteryear, she not only meets the love of her life, Ben Herrington, but discovers a fateful revelation that exceeds the boundaries of time and will control her destiny.