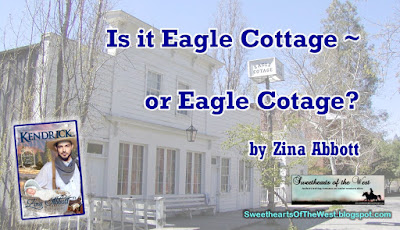 Eagle Cottage – or Cotage, as it is more popularly known – was built on Washington Street in the early days of the California gold mining town of Columbia.

There is controversy over the proper name of Eagle Cottage or Cotage. Some claim the building was named correctly as Eagle Cottage, but on a 1855 lithograph of the town, the artist shortened it to Cotage in order to fit the name on the sign out front. However, the name Eagle Cotage is printed below the picture on the lithograph. Others claim because the building was a boardinghouse that rented out cots rather than rooms, the name Eagle Cotage is correct—not a misspelling—and was the name from the beginning. 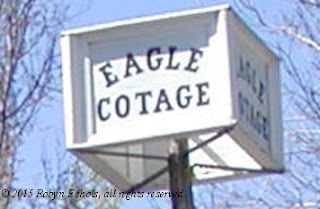 The building on Washington Street was destroyed in the fires of 1854, 1857, and 1861. After the third fire, it was not rebuilt again until 1960 after the California bought the property in Columbia and began to restore it to the appearance of an 1850s gold mining town.
In 1854, Wm. Odenheimer and Thaddeus W. Northey bought the property from Duncan and McClenahan. Odenheimer moved his Eagle Cottage boarding house to the property and into a larger building. It took care of 100 boarders and had a barber shop in the northeast corner so the tenants could spruce up for a night on the town. The building on the lot burned in the July 10, 1854 fire. It was rebuilt by July 23.

In 1855, a lithograph of important buildings in Columbia was created. It is assumed that the lithographer, due to a lack of space, just etched the word "Cotage" in the sign. That was where the controversy began, since this lithograph seems to be the earliest printed record regarding the building. There is no real documentation that the building's sign was misspelled. 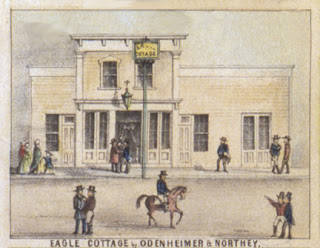 1856 Northey sold his interest to Isaac A. Stevens. (Odenheimer was drinking heavily. Where that tidbit of information came from, I’m not sure. My guess is, it was shared in the Columbia Gazette which published a weekly in 1856. In spite of the fires that destroyed much in Columbia, editions of that newspaper for 1856 were saved somewhere and are available on microfilm.)

On April 4, 1857, Soderer and Marshall bought the property at a sheriff's sale and leased it to Charles Bombauer. By August 25th, it was again destroyed by fire. The lot was purchased by Bombauer who rebuilt it. However, in 1859, the lot reverted to Soderer and Marshall after Bombauer failed to pay the mortgage. In February 1860, M.D.Kimball leased the Cottage. In April, Mrs. C. Bronson ran the business.
In July 1961, the building was again destroyed by fire. In October of the next year, the vacant lot was sold to James Griffiths, Tim Hayes, and Tom Hayes. The Eagle Cottage/Cotage was not rebuilt. 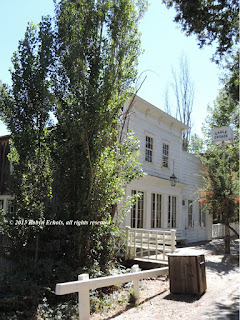 Since Washington Street borders the gold-rich Maine Gulch (Maine Ditch, Matelot Gulch) part of town, like much of Columbia, the site was mined in 1871 and then abandoned.

Fast-forward to the twentieth century when the decision is made for California to purchase the main part of Columbia and restore it to its 1850s glory as a gold mining town to become part of the state’s historic parks system. In 1950, the state purchased the empty lot from Luckows, Nicolas and Peterson.

In 1960, using the 1855 lithograph as a guide, the building was reconstructed with money from the College of the Pacific and the state. It was used by College of the Pacific drama students in summer repertory at the theater for the first time in summer, 1960. In May 1961 the building was officially dedicated. The word "Eagle Cotage" is placed in the sign which replicates the image in the 1855 lithograph.

It presently houses the park rangers’ offices and a meeting room for docents.

In my book, Kendrick, scheduled to be released February 1, 2020, I refer to Mrs. Arnold who runs the Eagle Cottage. I used Cottage in this book primarily because that word would be more familiar to most readers and not appear to be a misspelling which might detract from the story.

Kendrick is Book 9 in the popular Bachelors & Babies multi-author series. It will have a subtitle of “Too Old for Babies” since it is also part of my own Too Old in Columbia series. To find the book description and preorder purchase link, PLEASE CLICK HERE.

Here is a snippet from the book involving Mrs. Arnold:

…The only thing that had saved him today had been the appearance of Mrs. Arnold, who ran the Eagle Cottage boardinghouse. He had been busy cleaning up Madeline when he heard a worried female voice in front calling out his name. It was then he recalled that Jeb had put up the closed sign and shut the door, but the door had remained unlocked.
Not knowing what else to do with the baby, now barely out of the hip bath and in the process of being dried off, he flung her to his shoulder and tossed her yellow blanket which, fortunately, had escaped the disaster that had blown out of her diapers. Thus, he entered the front room where a wide-eyed middle-aged woman exclaimed at the sight of him carrying a baby. He laughed as he recalled her words. “Oh, Mr. Denham. When so much time passed, and you didn’t show up with my meat order, I worried there had been an accident. I thought, maybe you had cut off one of your fingers or something. I decided I better come and check on you.”
Truth of the matter was, Kendrick probably could have dealt with a chopped-off finger better than what he went through undressing, wiping clean, and then bathing Madeline. However, after he explained an abbreviated version of that day’s events, the woman took pity on him.
She told him she would take her meat order with her and get supper started. She also offered to watch Madeline that afternoon while he delivered the rest of his orders.
Before she left his shop, she even risked her reputation to enter his bedroom to help him dress the baby. She showed him how to fold diapers to fit around Madeline’s bottom and explained how the knit wool outer pants helped keep things drier. Mrs. Arnold even revealed the mystery of how safety pins worked to hold everything in place. 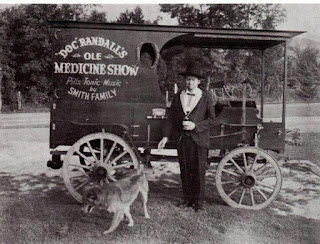 There’s money to be made in medicine. That statement is no truer today than it was 170 years ago when Chinese immigrants came to America and were enlisted in the work of building the Transcontinental Railroad. When the backbreaking work became too intensive and tight, aching muscles and joints plagued them, they used oil they had extracted from Chinese water snakes, which were mildly venomous, to ease the pain. This, along with a growing awareness of the common man’s plight of not having access to medical care in rural America, drove unscrupulous salesmen to concoct their own brand of snake oil remedies and travel by wagon to sell their wares to unsuspecting consumers. Thus, traveling medicine shows in which stooges (men who were in cahoots with the traveling salesmen) were sometimes sent ahead to the next town they would be visiting to announce the coming show. But more than not, the stooges were planted among the spectators and, not disclosing the fact that they knew the traveling salesman, were then used to attest to the healing properties of the salesman’s concoction.

One of the reasons the traveling medicine shows were so popular was because they provided much entertainment to the townspeople. Not only did the traveling salesmen know how to pitch their concoctions with flattery and all kinds of flowery speech, but they usually incorporated a few magic tricks or touted the benefits of using their concoctions by showing muscle men in the prime of life who were using it. Great pains were taken by these salesmen, as is also demonstrated by such salesmen as those who actually slit open rattlesnakes and threw into a pot of boiling water as a knock-off on the snake oil idea. As you might imagine, the crowd would have responded with such shocked yet morbid fascination so as to keep their eyes fixed on the spectacle.

These salesmen certainly knew how to draw a crowd in.

The problem with this was that rattlesnakes don’t contain nearly the amount of Omega-3 oil that the Chinese water snake possesses, which reduces inflammation. One such salesman whose snake oil helped the word to become synonymous with fraud in American culture was Clark Stanley. His snake oil concoction was seized by the government after the Pure Food and Drug Act passed in 1906 and determined to be made from mineral oil, red peppers, beef fat, and turpentine. Stanley was fined $20, which equals a little over $400 in today’s economic scale.

Snake oil medicine was not the only cure-all that appeared on the scene in this volatile time period. Others, such as Cocaine Toothache Drops, Needham’s Red Clover Blossoms & Extracts, Jamaican Ginger, Benjamin Brandreth’s Vegetable Universal Pills, and Dr. Morse’s Indian Root Pills were advertised in newspapers, and some were actually mentioned in popular literature of the day. Many of them contained opioids and other harmful ingredients, including alcohol. The Food and Drug Administration has since regulated medicine and its proper advertisement.

From this colorful chapter in American history, the snake oil salesman has become a fixture in Western lore. In my latest book, Hope Springs Eternal, I used a snake oil salesman as a cover for my antagonist, whose real purpose is to find his ex-partner-in-crime’s widow and extract certain details of their missing loot from her. I originally had it in mind to make him pretend to be a long-lost relative of Susannah, who has lost her memory due to a skating accident, but the snake oil salesman persona in and of itself is much more vibrant for a character, and it blended so effortlessly into the story. 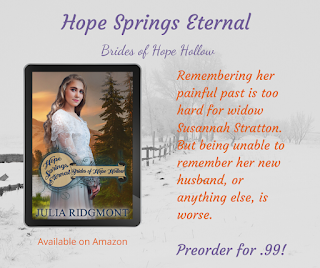 Hope Springs Eternal is a story of love and the power of healing—real healing—that comes from learning to trust in God. It is the second book in my new Brides of Hope Hollow series and releases this Thursday, January 30, 2020. Take a look here: https://amzn.to/2Mb5lDH