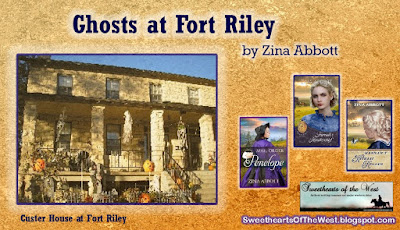 I'm not a big fan of Halloween, but I do enjoy reading about ghosts. More importantly, I believe the spirit world of the departed it not that far removed from earth. While most of the dead stay in that realm until it is time for them to move on to the next phase of their eternal life, many cling to the earth. Then again, I believe some so-called ghost sightings are actually occurrences in this physical world that, due to darkness and/or fog or mists, appear to be other-worldly. I'll let you decide for yourself.

What I found interesting were a record of ghostly sightings involving Fort Riley in Kansas. Fort Riley has been in existence in one form or another since 1853. It has suffered several cholera outbreaks and was one of the ground zeros for what became known as the Spanish Flu pandemic. It also prepared and sent many soldiers, including George A. Custer, into dangerous situations.

On one of the Legends of America posts, I found a fascinating account of other-worldly sightings involving Fort Riley. Rather than plagiarize, I will give you the link and allow you to read what they offer for yourself. However, you might enjoy the following teasers first.

Read about the ghosts associated with Camp Funston by Fort Riley due to the 1918 Flu pandemic. 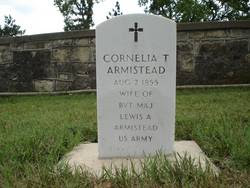 There were two major periods of cholera outbreaks that resulted in ghost sightings. One involved Cornelia Armistead, the wife of Major Lewis Armistead. Hoping to avoid his troops from catching cholera, he led them away from the fort. Within a short time, many of them became ill anyway. When he returned to the fort, he found his wife had died. Read about the sightings in the post cemetery. 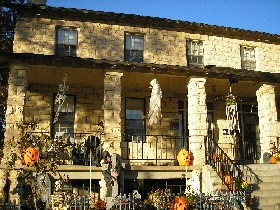 Custer and his wife never lived in the Custer House on the fort today. Instead, they lived in housing at Sheridan and Forsyth Avenue that was similar to the Custer House still on the base. Although the current Custer House has its share of hauntings, read about the ghostly appearances that race across the old cavalry field only to stop at the location of the original Custer House.

There are tales of haunting at the old Trolley House,

To find this collection of Fort Riley ghost sightings, please CLICK HERE. Be aware, this is a two-part article. The first part is a general history of Fort Riley. Keep reading, and you will find the ghost stories.

My currently-published books do not have anything to do with ghosts, but several of them have a connection to Fort Riley.

In Hannah's Handkerchief, Hannah meets Jake at a celebration dance held at Fort Riley. You may read the book description and find the purchase link by CLICKING HERE.

In Hannah's Highest Regard, Hannah and Jake, after being separated for most of two years, reunite at Fort Riley. Please find the book description and purchase link by CLICKING HERE.

Mail Order Penelope  does not have much to do with Fort Riley other than she traveled close to there and was aware that the men who brought cholera to the forts on the Kansas frontier passed through the fort. She meets Marcus, a post surgeon who had temporarily transferred to Fort Hays to help with the large cholera outbreak at that fort. For the book description and link for this book, please CLICK HERE.

Evolution of Wanted Posters in the Old West

Wanted posters are synonymous with the Old West, perhaps because they are used as a story device so often in books and movies that depict that era. Yet wanted posters didn’t start off being posters at all, nor were they circulated among the general public as we tend to believe—at least, not right away. Their beginnings are actually much humbler than our romanticized ideas.

According to Western historian Marshall Trimble, who writes for True West magazine, wanted posters were about as big as a postcard and they didn’t usually include photos of the men law enforcement officials were after the 20th century. The few exceptions were in the case of President Abraham Lincoln’s assassins being at large. The posters showing the likeness of John Wilkes Booth, John H. Surratt, and David C. Herold (wrongly spelled Harold) with rewards being offered for their heads at $50,000 for Booth and $25,000 for his two accomplices. Imagine what that kind of money could have done for a person! Is it any wonder that bounty hunters sprang up from miles around? Of course, tangling with a known criminal, often armed and dangerous, wouldn’t have been easy. But that’s a story for another time—or perhaps inside the pages of a sweet western romance, lol.

Another interesting fact was that wanted posters didn’t always target outlaws. Oftentimes, the person on the wanted poster was a missing person, as was the case for the example you see here. 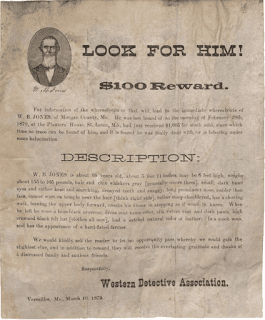 Later, when the Pinkerton National Detective Agency was replaced by the FBI, Identification Orders were used. Here’s one that shows famous duo Bonnie and Clyde: 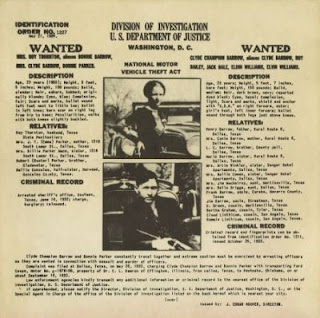 As you can see, they included much more background information on their subjects, even going so far as to list relatives and their whereabouts. Yikes!

You’ve probably heard of certain female outlaws from the Old West. Some of these include Belle Starr, Pearl Hart, and Laura Bullion. Most of the female outlaws worked as prostitutes, but a few of them also assisted their male counterparts in their schemes. Here are copies of their wanted posters. 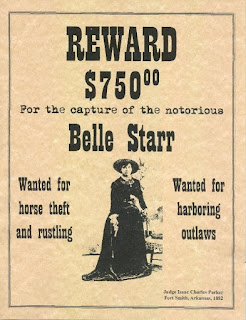 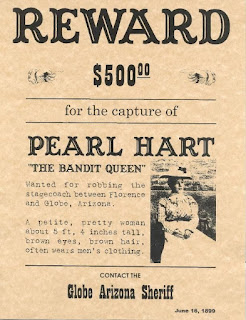 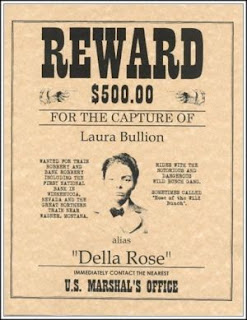 In an age when women were raised to be genteel, I find it fascinating that there were still some who grew up in respectable homes who chose a completely opposite way of life. I’ve often wondered what might have driven these female outlaws to choose the second alternative over the other. Did they not get along with their parents? Feel they had something to prove? Or just plain yearn for adventure? Of course, dire situations that arose with tight finances may have also contributed, as did the cases of women falling in love with male outlaws that we know of.

In my sweet historical western romantic book, Her Only Hope, I decided to write my heroine as a woman whose family had just been attacked by an outlaw, and in order to escape and survive, she needed to dress up as a boy. However, the truth finally catches up to her when a wanted poster with her likeness shows up in the town of Hope Hollow, which she has escaped to. Someone from her past knows she is there. Who could it be?

Alexandra and Jake have an entwined past, but now they must forge a new future together. Will true love prevail? Click on the book cover here to download the book and find the answers to these questions. Her Only Hope also introduces a few new characters in the town of Hope Hollow, who will take center stage in the next installment of the series. I hope you'll check it out. 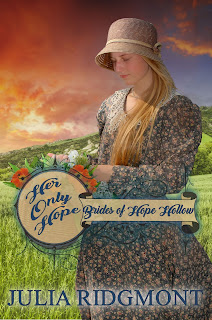