In my novella SALVATION BRIDE, the heroine Laura Slade, is a trained doctor.  Set in the 1870’s, this was not common, but possible.  By the end of the Civil War, several medical schools admitted women.  Laura, however, didn’t.  Instead, she apprenticed under her Uncle John, who had been to medical school and served as a doctor in the Civil War.
More common in the 19th Century, women were home-trained healers and midwives, who learned the art of healing from their mothers and grandmothers.  My current work in progress takes place in the 1860’s shortly after the Civil War.  The hero, Garrison and the heroine, Sammie, are on a wagon train heading West.  Sammie has been trained as a healer by her mother.  She takes with her on the trip her medicine chest.
The chest would contain such items as those listed in BLEED, BLISTER, AND PURGE by Volney Steele, M.D.  Common household remedies would be “feverfew, fleabane, boneset, rhubarb, oak of Jerusalem, thyme [and] marjoram,” (page 138). A few store-bought items would also be included:  Opium tincture or laudanum and whiskey for pain and surgeon’s plaster to bind broken limbs.
Sammie would know how to make poultices to relieve pain, help heal burns and possibly, even, to prevent pregnancy.  She’d make plaster of mustard to “ease the ache of bruises, arthritis, and pleurisy.” She might even apply sugar to wounds, once commonly known to dry out a fresh wound and inhibit the growth of bacteria. (page 143). 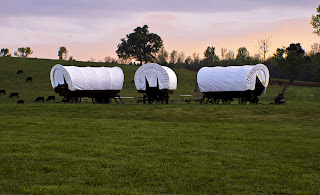 Cholera was the most common and the deadliest disease to sweep through a wagon train or settlement.  It wasn't understood at the time that cholera was caused by contaminated drinking water.  The best way to fight the disease was to replace fluids "volume to volume” as the patient suffered from severe diarrhea. However, this treatment was not well known.  Opium, if available, was also given to “relieve the pain and slow down the increased bowel action and cramps,” (page 80).
Diphtheria, measles, small pox and scarlet fever were all deadly diseases, especially among children, with no cures but to wait it out.  Diphtheria, in particular, was the most dreaded.  Highly contagious, a single case could start an epidemic, resulting in a high number of children dying when a “pseudo-membrane in the throat and pharynx…obstructed the windpipe and shut off air to the lungs.”  If the child survived this, she might still die from heart failure, caused when a potent toxin was secreted that effected the heart, (page 264).
One often overlooked disease on the frontier was scurvy, which was almost as deadly to the immigrants as cholera. With a common diet of corn meal, flour, beans and boiled or salted beef and few fresh vegetables and fruit, scurvy ran rampant in the West. Scurvy affects the overall health of the patient, causing extreme fatigue, nausea, pain in the muscles and joints of the body, bleeding of the gums (oftentimes resulting in the loss of teeth) and hair and skin become dry.  The simple cure for scurvy is the intake of Vitamin C, but the correlation between diet and scurvy was not discovered until the late 1800’s. Ironically, a common native plant along the trail, watercress, was full of Vitamin C and would have been a simple cure to this disease, if the immigrants had only known.
Many an immigrant’s diary is filled with entries of sickness and death on the journey.  In COVERED WAGON WOMEN by Kenneth Holmes, two journalists note such occurrences.  Anna King, on page 42, relates, “I wrote to you at Fort Larim that the whooping cough and measles went through our camp, and after we took the new route a slow, lingering fever prevailed….Eight of our two families have gone to their long home. Upwards to fifty died on the new route.”
Sallie Hester reports “We had two deaths in our train within the past week of cholera – young men going West to seek their fortune.  We buried them on the banks of the Blue River, far from home and friends,” (page 237).
By today’s standards, medicine in the 19th Century was crude in the best of hospitals. On the frontier, it was downright rudimentary.  As much as I’d love to give my heroines insight to the knowledge we have now, I shall have to resist and let them heal their patients with the remedies tired and true at the times, no matter how wrong we see them to be today.
_______ 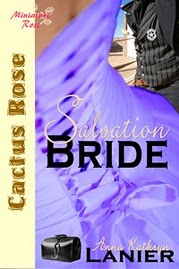 I’ll give away a copy of SALVATION BRIDE, a best-seller from The Wild Rose Press to one lucky commenter.  So, just leave a comment by Tuesday, April 17th....I'll draw a winner on Wednesday, April 18th (or there abouts, as I usually forget to do the drawing for a few days!)
This post first appeared at the Seduced by History Blog on April 19, 2010.
Anna Kathryn Lanier
www.annakathrynlanier.com
http://annakathrynlanier.blogspot.com/
Posted by Anna Kathryn Lanier at 4/14/2012