A Cowboy’s Rope
To the cowpuncher of the 1880”s his throw rope was almost as important as his horse. 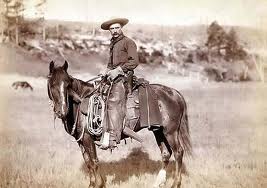 The word lariat comes from la reata, the Spanish term for “the rope.”  The word lasso may have come from the Spanish word lazada, which means “running knot” or “bowline.”  It also might have come from the word lazo meaning “snare.” However the cowboy of the old west always referred to his lariat as a “catch rope” or “throw rope.”  He never called it a “lasso.”


Throw ropes varied in length from between twenty and sixty feet. In the brush country of Texas, men threw a small loop, where on the plains longer and bigger loops were used.
Ropes were made of “seagrass,” Mexican maguey fiber, sisal and a few made of horse hair. Hemp was not used. Grass fiber ropes were coarse and bristly when new so they were laid on a pile of newspaper, then the newspaper was lit to burn off the loose fibers.  Grass ropes were strong and could take the strain of stopping heavy cattle and it was preferred by many Texas cowboys.
Nearly two-thirds of the open range cowmen preferred a rawhide rope.  Rawhide, called “reata,” are usually braided, though some early types were cut spirally from one long strip of hide. Many rawhide ropes were braided by the men who used them, using four to eight strands of rawhide.  Generally though working reatas were made from four strands and were three-eighths of an inch in diameter.
Saddle shops carried these ropes in stock, made by cowboys during the winter months.  Braiding this type of rope was an art and a good reatero was an artist.
Since the slip loop or honda (the loop through which the noose was tightened) was the most important part of the rope, great care was taken to fashion it.  It was tied into the end and had to be as small as possible to offer the least resistance to the wind, be the lightest possible weight at the rope’s working end, yet allow for slippage and still be strong enough to hold. 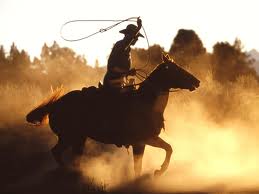 A metal ring or half ring was sometimes braided into the honda to provide the easiest slippage for the line.  Not too many cowboys used these metal Honda though. They were dangerous when swung and could easily take out a horse’s eye. Some men carved them out of deer and mountain sheep horns. In the 1880’s there was a fad among cowboys for brass and iron Hondas.
To soften up a rawhide rope it was run through two holes in a heavy plank then pulled back and forth.
A lot of work went into a rawhide rope.  It was expensive and required more care and it could not take the pop-your-head-off strain that a grass rope could.
Ready for use the rope or reata was carried on the right side either tied to the saddle or slung over the horn.  Rope tricks and fancy roping were popular among the men and many spent their leisure time perfecting their skill which in later years became popular entertainment at wildwest shows.
Sources:
McLoughlin, Denis,           Wild and Wooly, An Encyclopedia of the Old West, Barnes and Noble, Inc., 1975
Rickey, Don Jr., $10 Horse, $40 Saddle, Cowboy Clothing, Arms, Tools and Horse Gear of the 1880’s, The Old Army Press, 1976
Foster-Harris, William, The Look of the Old West, A Fully Illustrated Guide, Skyhorse Publishing, Inc., 2007
Posted by Kathy Otten at 4/06/2012