In the category of “dreams come true”, here is one of my best ones so far. I became 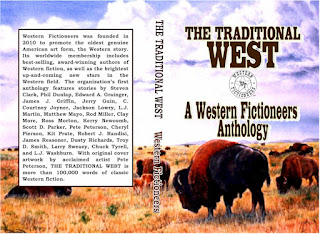 a member of the WESTERN FICTIONEER group a couple of years ago with the help of one of my friends, Kit Prate. Kit’s a fantastic western writer who’s been doing this a lot longer than I have, with many more “notches in her belt”—figuratively speaking—in the writing world. She put my name before the group and I was accepted—a greenhorn in the truest sense of the word.

A few months after I joined up, they decided to put together their first anthology. Livia and James Reasoner worked tirelessly on it—collecting the stories from those of us who wanted to submit, editing, formatting, writing the introduction to the book, and even deciding the order of the stories. One of the other contributors, Pete Peterson, provided the gorgeous artwork for the cover of the book.

This book is not, by any means, a romance offering. But there are stories from 24 different authors with many different “takes” on the west. It’s the largest anthology of original western short stories ever put together, and though every one of them might not be to your liking, you’re sure to find some different authors you might want to try out for further reading pleasure from this fantastic collection.

My story is called THE KINDNESS OF STRANGERS. It has a LOT of paranormal twist to it, but it’s one of my favorite projects I’ve ever worked on.

I’ll leave you with a blurb and an excerpt.

Jericho Dean is on a one-man mission: to track down the outlaw gang that murdered his wife and daughters. When Freeman Hart joins forces with him, Jericho isn’t sure which side this peculiar stranger is on. Determined to gain his revenge no matter the cost, Jericho finds redemption in a most unlikely circumstance. Will he take that fork in the road, or will his thirst for revenge end his chance for a new start?

EXCERPT FROM “THE KINDNESS OF STRANGERS”

Jericho gave Dan one final pat. “Ain’t many men lost as much as I did on that day, Freeman. My wife, my daughters, and my desire to exist in this world without them.” He pointed at the growing pile of wood. “No fire.”

Hart gave a sage nod. “I see. You’re expecting to be reunited once you complete your mission—kill the Comancheros. Once you die, you think you and Elena will be together again, along with Maria and Ana.”

Jericho stood completely still. How did this stranger know the names of his family? How did he know Jericho’s own heart and purpose so clearly?

Hart dropped the last two pieces of wood on top of the pile, then dusted his hands. “We need to have a talk, Jericho. A good long visit about things. I don’t aim to do it in the cold. And make no mistake, this night’ll be an icy one—way too cold to spend without a fire. Trust me, boy. They ain’t gonna know—or care—if you spend it warm or freezin’. Got a match on you?”

Jericho sized up the other man once more, a shiver running up his spine. No, things were not what they seemed, but whether for good or evil, he didn’t know. He cursed his luck, either way. He didn’t want to be burdened with whatever it was this Freeman Hart brought to the table. He hadn’t asked for it, either way. He remembered that he had deliberately not prayed, carefully refrained from asking God for any favors, so he wouldn’t have to be in His debt. Well, he still didn’t plan on owing Him anything, no matter how this all worked out.

He finally forced his legs to move, walking stiffly to his saddlebags. He put the brush away, and drew out the box of matches wrapped in oilskin.

Hart caught them when Jericho tossed them over, opened the box and struck one of them on the bottom of his boot. The match head flared in the gathering semi-darkness and Hart hunkered down, cupping his hand around the flame as it caught the base kindling of the pyre and the wood above it began to burn.

Jericho stood watching as the fire flared to life, remembering how he’d burned the cabin. After he’d buried Elena, Maria and little Ana, he’d poured kerosene throughout their home. The smell of it had made his stomach twist and roll over. He’d poured it over the cabinetry he’d built so lovingly for Elena, remembering how proud she’d been to have a pantry in her kitchen. He’d poured it across the bed where they’d made love. Made children. Made a family together.

He’d opened up the old trunk that had been Elena’s, full of her keepsake treasures. He had taken only one thing from the chest before he’d saturated the rest of the contents with the kerosene remaining in the can. He’d stood at the door and tossed in the match, watching as the trail of fire raced across the dirt floor of the cabin and began to eat the furniture, the woodwork, and finally the walls.

Then, he had turned his back on the entire dream he’d created and then destroyed, riding away from it as it burned. It maybe burning still, he mused. That entire northern part of Indian Territory could be nothing but acres of smoldering blackness destroyed by his hand. Right now, if he could, he’d set the entire world ablaze.

Yes. A fire would be good to have tonight.

“Say, Jericho. You hungry? Me, I’m so hungry my stomach thinks my throat’s been cut. I’ve got some tins of beans and peaches we can open up.” Hart rose and crossed to where his saddlebags lay, rummaging for the tins of food. He pulled them out and came back toward Jericho, who stood rooted to the spot where he’d gone moments earlier to get the matches.

Hart nodded toward the fire. “C’mon. Let’s get some grub. Talk a spell. I can see you’ve got some questions.”

“Who are you?” Jericho’s voice was hoarse.

Hart laughed. “I knew that’d be the first one.”