Dr. Kirkpatrick kept a journal during his adventurous travel by wagon train across the country in 1849. Written with such eloquence, it is on microfilm and sealed in a glass container and kept in an air tight room in the Bancroft Library at the University of California, Berkeley, California. Its size is about 9 x 12 inches and its cover is of leather, which is tattered and very delicate due to its age. There are a total of forty hand-written pages. It was willed to the Bancroft Library so others could read about the adventurous early California pioneer. 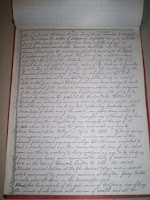 An excerpt from my great-great grandfather's journal: "This morning we again started on our journey and at 2 p.m. we had the best view of the train that we have had since we started. The road, in order to keep on good ground, forms a complete letter 'S'. In the middle of the letter, as it were, is a very high front from which a person can see the road and the wagons as far as the eye could distinguish objects. Within the range of this letter could be distinguished and counted with the naked eye 100 teams, all bound on the fool's errand to California. In this company might be seen the old gray-headed man who had almost numbered his three score and ten - the mother with the babe on her breast - the blushing girl of 16, but who by the time she had reached California will have lost the maiden blush by the association with the course vulgarity with which she is surrounded. It is useless to speak of particular characters, for every description from the reverend priest to the low footpad may be found enroute for California. And pain, disease and death also accompany us and, first one and another of our company are silently laid by the roadside to wait the summons of the Judgment day. And yet this makes no impression upon the survivors. The next day appears as though nothing had happened." At the point of his adventure from St. Joseph, Missouri, to the gold fields of California, Charles was well-educated and already had his degree as a doctor of medicine. His handwriting was a beautiful script and written by a man with high morals and consideration of his fellow man. Becoming rich in the gold fields didn't materialize, so he returned to the practice of medicine. He married and moved to Rio Vista, California, where he practiced his profession, had a pharmacy, and was also the postmaster of the town. When the Civil War broke out he volunteered as a surgeon in the army from October 15, 1861 to October 15, 1865, and was stationed at Fort Mason, San Francisco, California and Fort Douglas, Utah as a Surgeon Major. This is the can Surgeon Major Kirkpatrick kept his belongings in during the Civil War. 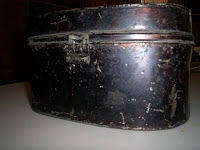 He kept his epilates on top inside the can. 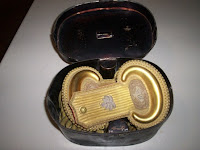 These were all the objects inside the can. 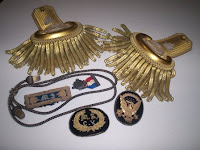 After the war he became one of the leading doctors in San Francisco and Redwood City, California. In order to raise his family in a more favorable atmosphere he had built a lovely ten room home in Redwood City. It was considered a fine modern home at the time. One of the many interests Dr. Kirkpatrick had was acting. He and his friends performed plays which were presented in their spacious home in Redwood City. Elaborate costumes were made and worn by the cast members. One of his associates was Mrs. Brown, a survivor of the Donner Party. Another friend, sculptor Douglas Tildon, made the famous Mechanic Statue which is displayed on Market Street in San Francisco. My grandfather, Arthur Rowell Kirkpatrick, Jr., was born in this elaborate house and was delivered by his own grandfather, Charles Kirkpatrick on May 24, 1891. Dr. Kirkpatrick died in St. Luke's Hospital in San Francisco on April 27, 1892.
Posted by Paisley Kirkpatrick at 4/02/2012