I am fascinated by the early Texas and Mexican pioneers. One I recently learned about is Petra Vela de Vidal Kenedy. She must have been a strong woman.

Petra was born on June 29, 1825, in Mier, Mexico, to Josefa and Gregorio Vela. Her father was a provincial governor under Spain with jurisdiction over the territory lying between the Nueces River and the Rio Grande and over the Indian tribes within. Señor Vela owned a large portion of land. Petra was one of the few Mexican-origin upper-class women in nineteenth-century Texas.

In December 1840 supposedly she married Luis Vidal, who was originally from Greece and was a colonel of the Mexican regular army. Luis’ decorated military career allowed him and Petra to become a very wealthy family and allowed Petra to establish military contacts within the Mexican military. They had six children before Luis died. Dr. Caroline Crimm’s research in Mexico City led her to believe that Petra and Vidal never actually married. Whether they did or not, he gave his name to their children. Vidal died of cholera in 1849.

Following Luis Vidal’s death, Petra moved her children to Brownsville, Texas. Already a wealthy woman, she married rancher Mifflin Kenedy on April 16, 1852, in Brownsville. Mifflin was a Quaker, but he accepted her Catholic faith. At this time intermarriage between white men and Mexican-origin women was not common and more typically occurred among elites. 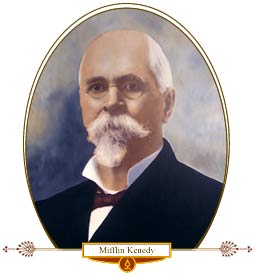 The Kenedys had six children and adopted another. As did most women in nineteenth-century Texas, Petra dedicated much of her life to childbearing, childrearing, and the domestic support of the family and the ranch. The Kenedys became one of the wealthiest families in South Texas, dealing primarily in cattle, horses, sheep and land. In 1854 the Kenedys owned a flock of 10,000 sheep near El Sal Rey in Hidalgo County. During the Civil War, Mifflin Kenedy established his wealth through the cotton trade and steamboating. Throughout the 1860s, he was in partnership with Richard King in land, cattle, horses, and sheep.

In 1869 the Kenedy family moved from Brownsville and established the Laureles Ranch in Nueces County. In 1870 the federal census enumerated the Kenedys in Duval County. Their real estate was valued at $21,000 and their personal assets at $139,600.

In 1880 Petra Kenedy resided with her family at the Laureles Ranch, which consisted of 172,000 fenced acres. Including vaqueros, shepherds, and laborers 161 workers were employed there. The ranch also included more than twenty families with more than forty children and a Canadian schoolmaster.

Petra was able to use her connections to persuade raiders not to raid her ranch and she used her wealth to fund a small army of mercenaries to protect her interest. In 1882 Kenedy sold the ranch to the Texas Land and Cattle Company. Petra had become an invalid but doctors could not understand why. (I think having a dozen children may have contributed.) The Kenedy family established the Kenedy Pasture Company in Cameron Count with headquarters at La Parra Ranch, home of their son, John G. Kenedy.

Petra and Mifflin settled in Corpus Christi. In 1884 Kenedy was among the twenty-two persons or firms whose property was valued at over $10,000. The Kenedy residence there was an Italian villa-style home. In Corpus Christi Petra Kenedy helped the church and the poor. A devout Catholic, she donated three bells for the tower and other gifts for the new Catholic church. She also made generous donations to St. Mary's Church in Brownsville.

Petra died at Corpus Christi on March 16, 1885, and was buried at Brownsville. Her obituary noted that "the poor never appealed to her in vain and their wants were often anticipated."

My latest release is DESPERATE IN DELAWARE, Yours Truly: The Lovelorn Series. Most of this book is set in North Central Texas. The Universal buy link is https://mybook.to/Mina

Here's the blurb:
I will wait no longer! Since my parents’ death I’ve been living with my sister’s family. I help care for her home and her adorable children. But, when will I have my own husband and children? There is not even one eligible man near my age in our small town. I hear the snickers and hurtful remarks—old maid, spinster, on the shelf. My cousin sent me a newspaper clipping from a Yours Truly: The Lovelorn’s column. Imagine my surprise when the letter to the columnist read as if I had written it. I’ll do it—I’ll follow the Lovelorn’s advice and change my location. I’ll go to Texas to visit my cousin. I refuse to watch my life disappear until I’m left with only regrets!