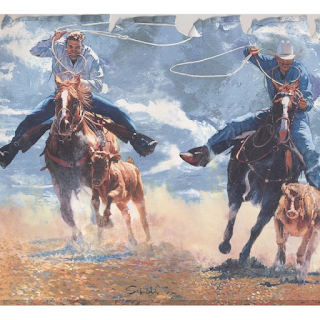 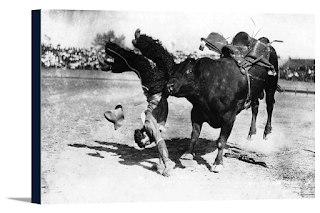 It's Christmas in July and the gate opens. Out comes a wildly bucking horse with the man determined to stay in the saddle. Six seconds, seven, eight! He stayed on the required eight seconds. 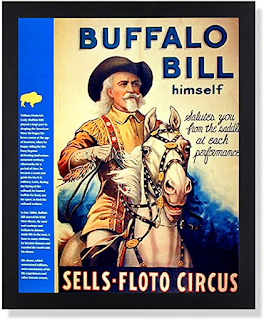 That's a common enough scene at a rodeo. Consider, though, how did we get our modern rodeo?

Small communities in Texas would come together to celebrate the Fourth of July. Bronc riding and showing off roping skills became a part of those celebrations. Cowboys from different ranches could compete to see who was the best.

In the last quarter of the nineteenth century, Wild west shows were very popular and featured some of what became a part of any rodeo. Cowboys signed on to show off their riding and roping skills. The public loved it.

The first rodeo recorded as awarding prizes was held in Pecos, Texas in 1883. The first one to charge admission is thought to be in Prescott, Arizona. Regardless of where these things happened, by the 1890, rodeos became annual events in many places. 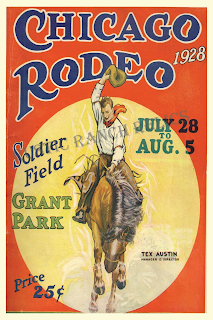 With their popularity, a huge problem rose. Many of the large rodeos billed themselves as "World Championship Rodeo". Just imagine how many world champions there were in one year alone! This is one of the reasons that several rodeo committees formed the Rodeo Association of America in 1929. It was the start at trying to regulate the celebration and change the rodeo from a spectacle into the sport that it is today.

But why Christmas in July or Cowboy Christmas? I'm not sure. I do know that ten days in early July are packed with more rodeos than a person could hope to attend. It's definitely an exciting time. The contestants have the chance to win some serious money, though most spend more to be there than they win. Still, maybe the chance of winning the payout is why it's like Christmas to them.


Sadly, people couldn't head out to rodeos this year. Long standing traditions gave way to health and safety concerns, and the annual rodeo became one more victim in this terrible pandemic.

I hope that isn't a sign that Santa plans to stay home on December 24...

(I want to direct you to a fantastic article for more information on the background of rodeos--https://tshaonline.org/handbook/online/articles/llr01#.) 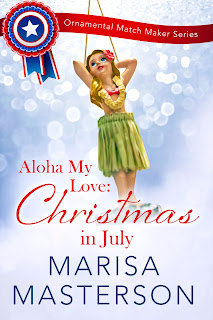 Pre-order today for the special price.

A hula dancer—seriously? And blonde to boot!

Why did someone send JT Kirkwood a hula dancer ornament? This was July, not even close to December and the season for a Christmas tree. The note promised that the dancer was real and waiting for him. No matter how ridiculous this seemed, JT looked at the ornament and felt compelled to find the woman mentioned in the note. Too bad his father’s accident prevents him from looking.

A luau—seriously? With their town of Oak Grove hit by layoffs, why did Bonnie Miller’s mother insist that they throw a city-wide party at the small strip mall that housed Bonnie’s restaurant. Still, her mother had fantastic insight into what the public wanted, so Bonnie went along with it. She even danced the hula for the crowd, and saw the man of her dreams watching.

Serenaded by Elvis, this couple easily falls in love. But is love at first sight enough to overcome the distance that separates the couple when JT has to return to his job in another town far from Oak Grove? He loves his home and job, but Bonnie is fiercely loyal to hers as well.

Mrs. Claus is discovering that not even the magic of a compelling ornament or the lyrical sounds of Elvis will be enough to bring about this couple’s happily ever. Which one will compromise? Will each say Aloha--meaning goodbye?