Russell Lee traveled around the country during the Great Depression capturing what would become iconic documentation of those affected by the times. His travels included pictures of cowboys and families in the American West.
Russell Lee was born in 1903 in Ottowa, Illinois. He attended Lehigh University in Bethlehem, Pennsylvania and earned a degree in chemical engineering, but his heart was in his painting. He became interested in photography initially as a way to improve his painting, but he soon realized that his calling was in photography.
In 1936, the Farm Security Administration, or FSA, hired Lee to take photographs with a group that included Dorothea Lange. Lee traveled around the country, including San Augustine, Texas and Pie Town, New Mexico.
His photographs "were supposed to convince critics of the New Deal that conditions were so bad that government aid was absolutely necessary." (https://www.texasmonthly.com/articles/making-the-best-of-it/)
Lee said that they researched the area and talked to the people before he photographed them. "We wanted to do good reporting," Lee told Texas Monthly years later  in an interview.
Lee's photography usually features real life situations, people of poverty in their day to day lives during the Great Depression. Even though he often shows the direst of environments, Lee's subjects often seem resigned, or during celebratory times, even content. At other times, his subjects stare unflinchingly at the camera with a palpable sadness or a stoic resignation.


After the FSA disbanded in 1943, Lee worked for the Air Transport Command. He then worked for the U.S. Department of the Interior, taking pictures of coal mining communities. Lee also documented the forced relocation of the Japanese Americans to internment camps. 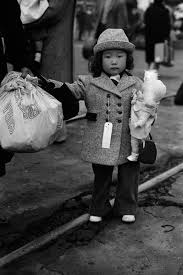 In 1947, he moved to Austin, Texas where he eventually became the first photography instructor at the University of Texas in 1965. Russell Lee died in 1986. Lee's legacy is documenting some of the hardest times in our country with realism and compassion.

Library of Congress: Many Photographs of Russell Lee's
Posted by Bea Tifton at 7/12/2020