A significant territorial outpost, Fort Apache was built in the spring of 1870.
Leadership at the time name it Camp Ord, in honor of General O.C. Ord, Commander of Arizona. In August of that year they changed the name to Camp Mogollon, and in September they gave it another name, Camp Thomas. That’s three names in less than a year.
Finally, on February 2, 1871, they gave it the name that stuck—Fort Apache.
The fort was built at the end of a military road on the White Mountain Reservation, to guard it and the White Mountain Agency.
In 1869, Colonel (Major) John Green of the U.S. 1st Cavalry wrote the following:
“This post would be of the greatest advantage for the following reasons: It would compel the White Mountain Indians to live on their reservation or be driven from their beautiful country which they almost worship. It would stop their traffic in corn with the hostile tribes, they could not plant an acre of ground without our permission as we know every spot of it. It would make a good scouting post, being adjacent to hostile bands on either side. Also, a good supply depot for Scouting expeditions from other posts, and in fact, I believe, would do more to end the Apache War than anything else.” 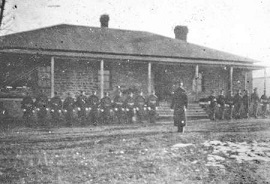 Fort Activities
There was a lot of activity at the fort on August 1871, when General George Crook, commander of the Department of Arizona, made his first visit. He recruited about 50 Native Americans from Pedro and Miguel’s bands to work as Apache Scouts. The Scouts came to play a critical role in the Apache Wars which lasted for the next fifteen years and only ended with the final surrender of the Chiricahua leader Geronimo in 1886.
A great deal of unrest took place at the fort in 1876 when federal troops moved the troublesome Chiricahuas from Fort Bowie to the White Mountain Reservation.

In 1881, the departmental commander, General Orlando Willcox, heard about a shaman named Nochaydelklinne, who was preaching about a mystical religion—a means to resurrect the Apache’s dead and also to drive the white men away.  The shaman soon gained a large following and the General feared he might stir up trouble. Willcox sent troops to arrest the shaman, who camped with his followers on Cibeque Creek, near Fort Apache.
On August 30, 1881, the troops tried to take Nochaydelklinne into custody and a fight broke out. The medicine man was shot and killed, which incited a mutiny among the Apache scouts.

Battles Fought by Fort Apache Troops
General George Crook planned a Tonto Basin campaign and moved on to Camp Verde to execute the tactical operations. Several Apache scouts crisscrossed the Tonto Basin and the surrounding tablelands, hunting the renegade Tonto Apache and their Yavapai allies in the winter of 1872 to 1873. They forced about 20 skirmishes and in all killed around 200 Native Americans until they finally wore down their adversaries.
Soldiers from Fort Apache continued to battle various renegade bands led by such famous warriors as Geronimo, Natchez, Chato, and Chihuahua.
The Battle of Fort Apache was the major engagement fought by the troops on September 1, 1881. The attack was in retaliation for the Cibecue Creek battle in which Nochaydelklinne was killed. However, the two engagements occurred about forty miles from each other on opposite sides of the Fort Apache Reservation and happened two days apart.
From long range, near Whiteriver, Arizona, the Apaches repeatedly fired volleys at the fort with their rifles and scored some hits. The U.S. cavalry and native allies returned fire, but the Apache remained at the end of their rifle range during the entire fight. The action lasted until sunset after several Apache attacks were repelled by counter fire.
By the time reinforcements from Fort Thomas on the San Carlos Indian Reservation arrived, two days later, the Apaches had withdrawn into hiding. Only three American soldiers were wounded. The Apache casualties are unknown.
Nochaydelklinne's death roused other Apache groups to leave their reservations and join Geronimo and other leaders for battle or to escape to Mexico. It was only after Geronimo was captured for the last time in 1886, that the Apache Wars finally came to an end.

You Can Plan a Visit
When the fort closed, its buildings were turned over to the Bureau of Indian Affairs. Some of the buildings are still standing.  People can visit the Fort Apache Historical Park from 8 a.m. to 5 p.m. Monday to Saturday in summer, and 8 a.m. to 5 p.m. Monday to Friday the rest of the year.
The Fort Apache post office occupies the adobe adjutant’s building. A log building, one of the oldest structures and reputedly the residence of General Crook, as well as the stone officers’ quarters, are today the residences of teachers and other Bureau of Indian Affairs employees.
Also, an overview of the history of the fort and its impact on the Apache people is kept in General Crook’s Cabin. Photomurals, maps, and historic photographs bring the past alive to visitors. A mid-1870s period room offers a glimpse into the world of Army officers and their families at a remote outpost.
Twenty-seven historic buildings make up the core of the 288-acre National Register Historic District. Following maps available at the Museum, visitors can explore the district at their own pace. Interpretive signs explain the construction and use of the historic buildings and spaces, so visitors can immerse themselves in the history of what many consider the best surviving example of an Apache Wars-era military post.
The Sutler’s Store and commissary building, cavalry barns, and guard house haven’t changed much. The parade ground provides a recreational area. The cemetery no longer holds the bodies of dead soldiers, but the graves of the Indian scouts are still there.
Visitors can also hike the Historic Park ’s recreational trails, including a 1.4 - mile loop through the East Fork canyon that passes by the site of a historic Apache Scout camp and a small Ancestral Pueblo village. 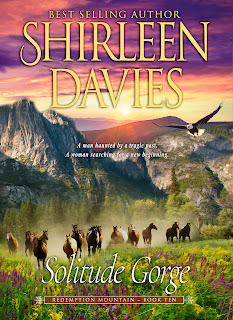