THE MOTHER OF LEVEL MEASUREMENTS

"Correct measurements are absolutely necessary to insure the best results. Good judgment, with experience, has taught some to measure by sight; but the majority need definite guides." Fannie Farmer
When Hero and I first married, I joined a cookbook-of-the-month club and bought a paperback copy of FANNIE FARMER'S COOKBOOK. I had no idea at the time that she had died decades before. I used many of her recipes. Now I realize how famous she was and continues to be. Although she isn't strictly "west of the Mississippi", certainly her influence helped cooks nationwide.
Fannie Merritt Farmer was born on 23 March 1857 in Boston, Massachusetts, to Mary Watson Merritt and John Franklin Farmer, an editor and printer. Although she was the oldest of four daughters born in a family that highly valued education and expected young Fannie to go to college, she suffered a paralytic stroke at the age of 16 while attending high school. Fannie could not continue her formal academic education. For several years, she was unable to walk and remained in her parents' care at home. During this time, Farmer took up cooking, eventually turning her mother's home into a boarding house that developed a reputation for the quality of the meals it served.

Eventually she was able to walk again though she still had a limp she never lost. She decided to enroll in the Boston Cooking School at the age of thirty upon recommendation of a friend. Farmer trained at the school until 1889 during the height of the domestic science movement. She learned what were then considered the most critical elements of the science, including nutrition and diet for the well, convalescent cookery, techniques of cleaning and sanitation, chemical analysis of food, techniques of cooking and baking, and household management.

Farmer was considered one of the school's top students. Two years after she graduated, she was kept on as assistant to the director. In 1891, she took the position of school principal.

In 1896, Fannie approached the publisher Little, Brown & Company with her book, THE BOSTON COOKING-SCHOOL COOKBOOK. They didn’t think it would do very well, so they only agreed to print a limited run of 3,000 books if Fannie would cover the costs. The book was an immediate success, becoming a best-seller across the United States and selling over four million copies during Fannie’s lifetime. Quite an accomplishment for what started as little more than a vanity press publication. 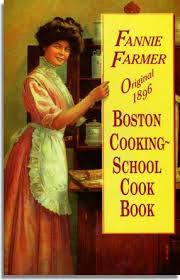 Farmer provided scientific explanations of the chemical processes that occur in food during cooking, and also helped to standardize the system of measurements used in cooking in the United States. Her cookbook introduced the concept of using standardized measuring spoons and cups, as well as level measurement. Before the COOKBOOK’S publication, other American recipes frequently called for amounts such as "a piece of butter the size of an egg" or "a teacup of milk." Hmm, sounds like my grandmother and mother's directions: "season until it tastes right", "stir until it looks right", "cook until done". Farmer's systematic discussion of measurement led to her being named "the mother of level measurements." 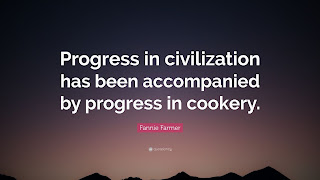 THE BOSTON COOKING-SCHOOL COOKBOOK was a follow-up to an earlier version called MRS. LINCOLN’S BOSTON COOK BOOK by Mary J. Lincoln in 1884. Under Farmer's direction the book eventually contained 1,850 recipes, from simple to elaborate. Farmer also included essays on housekeeping, cleaning, canning and drying fruits and vegetables, and nutritional information. The book was so popular in America, so thorough, and so comprehensive that cooks would refer to later editions simply as the FANNIE FARMER COOKBOOK, and a revised version is still available in print over a hundred years later.
Fannie continued as principal for 11 years at The Boston Cooking School before she left to found her own school, called Miss Farmer’s School of Cookery also in Boston. In addition to teaching, she traveled across the United States giving lectures. She suffered several more strokes and during the last seven years of her life had to speak from a wheelchair.
She began to focus on convalescent diet and nutrition, and was even invited to teach the subject to doctors and nurses at Harvard Medical School. Fannie’s approach to convalescent cooking was innovative in its empathy and compassion. Farmer understood the value of appearance, taste, and presentation of sickroom food to ill and wasted people with poor appetites. She ranked these qualities over cost and nutritional value in importance.
In 1904, she wrote a book called FOOD AND COOKERY FOR THE SICK AND CONVALESCENT. She felt so strongly about the significance of proper food for the sick that she believed she would be remembered chiefly by her work in that field, as opposed to her work in household and fancy cookery. 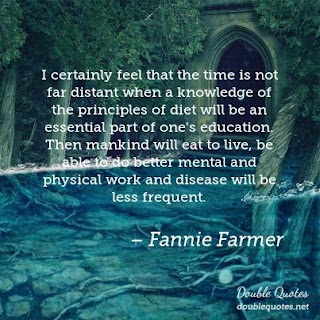 Despite her immobility, Farmer continued to lecture, write, and invent recipes. The Boston Evening Transcript published her lectures, which were picked up by newspapers nationwide. She gave her last lecture only ten days before her death. Fannie Farmer died in 1915, aged 57, and was interred in Mount Auburn Cemetery, Cambridge, Massachusetts.
The school she founded, Miss Farmer’s School of Cookery, stayed open until 1944. To many chefs and home cooks in America, her name remains synonymous with precision, organization, and good food.
Sources:

Caroline Clemmons writes western historical and contemporary romances. Her latest is a western time travel set in Texas. The first two are TEXAS LIGHTNING and TEXAS RAINBOW. On May 25, book three will be released, TEXAS STORM.  Purchase link for TEXAS LIGHTNING is http://amzn.to/2H2N1rF and for TEXAS RAINBOW is http://amzn.to/2JOppZE. (hint, hint!) 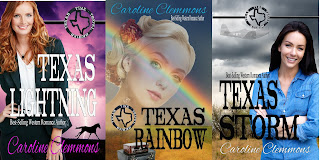 Follow her on Amazon here. Follow her on BookBub here. Subscribe to her newsletter here for updates on releases, contests, and giveaways.
Posted by Caroline Clemmons at 4/22/2018