RIDING A STAGECOACH IN THE OLD WEST

In the Eastern United States, riding a coach meant travel from one stage stop to the next, stopping at a tavern or inn for a meal and perhaps spending the night. In the West and Southwest, there were not enough established towns to support this kind of travel. Western travelers had to be made of grit and determination!

In 1858, John Butterfield undertook an overland stage line connecting St. Louis and San Francisco by way of El Paso, Texas. The route also ran through Tucson and Los Angeles, both of which were only villages of a few hundred residents. A federal contract paid the stage company $600,000 a year to carry U. S. mail across the continent. That sum helped subsidize way stations at regular intervals. The company spent nearly a year getting everything into place to support semi-weekly stagecoach service.

When Butterfield’s Overland Mail Line opened for business on 16 September 1858, the journey between St. Louis and San Francisco required three weeks of hard traveling—if the weather was good. Coaches moved all day and all night except for brief intervals at way stations. The fare did not include the cost of meals, which cost an average of a dollar each three times a day. Passengers had to sleep aboard the coach. These mail lines were guaranteed to be rugged but they got the mail through.

At this time, most coaches set on springs which provided a bumpy, jostling ride. If passengers were fortunate, the route included riding in a Concord stagecoach. The first Concord stagecoach was built in 1827 in Concord, New Hampshire. Abbot Downing Company employed leather strap braces under their stagecoaches which gave a swinging motion instead of the jolting up and down motion of spring suspension. They were known to be built so solidly they didn’t break, they just wore out.

Over 700 Concord stagecoaches were built by the original Abbot Downing Company before it disbanded in 1847. However, the company was still building coaches, wagons, and carriages according to their business card of 1898. The coach was noted for its ability to keep passengers dry while floating across streams and rivers. The swaying motion caused some passengers to become “seasick”.

In his 1861 book ROUGHING IT, Mark Twain described the Concord stage’s ride as like “a cradle on wheels”.

Not all stagecoaches were of one of these types. Celerity or "mud" wagons were much lighter and cheaper to build. They had no springs so they offered a much rougher ride. They were primarily used on lines where passenger and express traffic was too light to justify the expense of Concord coaches. Instead of having a heavy wooden top, the celerity had a light frame structure with thick duck or canvas covering, greatly reducing the vehicle’s weight. Wheels were set further apart and were protected by wide steel rims that helped keep the coach from tipping over or the wheels from sinking in soft sands.

While not as comfortable for daytime travelers, they were designed for passenger travel at night. Remember, the Overland Mail coaches didn't stop at night. Waterman L. Ormsby, special correspondent to the New York Herald described the sleeping accommodations.

“As for sleeping, most of the wagons are arranged so that the backs of the seats let down and form the length of the vehicle. When the stage is full, passengers must take turns sleeping. Perhaps the jolting will be found disagreeable at first, but a few nights without sleeping will obviate that difficulty, and soon the jolting will be as little of a disturbance as the rocking of a cradle to a sucking babe. For my part, I found no difficulty sleeping over the roughest roads, and I have no doubt that anyone else will learn quite as quickly. A bounce of the wagon, which makes one’s head strike the top, bottom, or sides, will be equally disregarded, and ‘nature’s sweet restorer’ found as welcome on the hard bottom of the wagon as in the downy beds of the St. Nicholas. White pants and kid gloves had better be discarded by most passengers.”

Unlike the classic Concord stagecoaches, which could be mired in bad weather, mud wagons could travel over trails and roads during inclement weather. The only protection provided for passengers against bad weather and dusty roads were the canvas side curtains which could be rolled down and fastened.

By the way, the word “stage” meant the place where the horses or mules were changed—staged along the route. These were spaced every 12 to 20 miles, depending on the terrain, and were usually operated by a single man living in a small cottage who kept a change of horses in a barn and/or corral. The stage stopped only long enough for passengers to stretch their legs while the horses or mules were changed.

Every 50 miles were the “home” stages, which were usually a couple or family who served meals and could provide overnight lodging—though sometimes passengers slept on a dirt floor. These stations also might include a blacksmith and stables. Drivers might be switched there.

Some coaches had two seats facing one another. The larger Concord squeezed in a center, forward-facing third seat, which made passengers very crowded and uncomfortable. Often the third seat had no back, which must have made retaining balance awkward as the coach swayed along. Often passengers had to interlock knees due to the crowded interior. Imagine you were a lady in the 1800s who’d been raised to observe propriety and you found yourself (while wearing a tightly laced corset) on a long coach ride having to lace legs with a unappealing male stranger. Ugh! Come to think of it, that wouldn’t be comfortable now.

Here are a set of rules posted by Wells Fargo in 1888:

1.      Abstinence from liquor is requested, but if you must drink, share the bottle. To do otherwise makes you appear selfish and unneighborly.
2.      If ladies are present, gentlemen are urged to forego smoking cigars and pipes as the odor of same is repugnant to the Gentle Sex. Chewing tobacco is permitted but spit WITH the wind, not against it. (I’d think this would be a given, wouldn’t you?)
3.      Gentlemen must refrain from the use of rough language in the presence of ladies and children.
4.      Buffalo robes are provided for your comfort during cold weather. Hogging robes will not be tolerated and the offender will be made to ride with the driver.
5.      Don’t snore loudly while sleeping or use your fellow passenger’s shoulder for a pillow; he or she may not understand and friction may result.
6.      Firearms may be kept on your person for use in emergencies. Do not fire them for pleasure or shoot at wild animals as the sound riles the horses.
7.      In the event of runaway horses, remain calm. Leaping from the coach in panic will leave you injured, at the mercy of the elements, hostile Indians, and hungry coyotes.
8.      Forbidden topics of discussion are stagecoach robberies and Indian uprisings.
9.      Gents guilty of unchivalrous behavior toward lady passengers will be put off the stage. It’s a long walk back. A word to the wise is sufficient. (I love this one)

To these, the Omaha Herald in 1877 added cautions to:

Never ride in cold weather with tight boots nor close-fitting gloves.
When the driver asks you to get out and walk, do so without grumbling. He will not request it unless absolutely necessary.
Don’t linger too long at the pewter wash basin at the station. Don’t grease your hair before starting out or dust will stick there in sufficient quantities to make a respectable ‘tater patch. Tie a silk handkerchief around your neck to keep out dust and prevent sunburns. A little glycerin is good in case of chapped hands.
Don’t discuss politics or religion nor point out places on the road where horrible murders have been committed.
In very cold weather, abstain entirely from liquor while on the road. A man will freeze twice as quick while under its influence.
Don’t imagine for a minute you are going on a picnic: expect annoyance, discomfort, and some hardships. If you are disappointed, thank heaven. 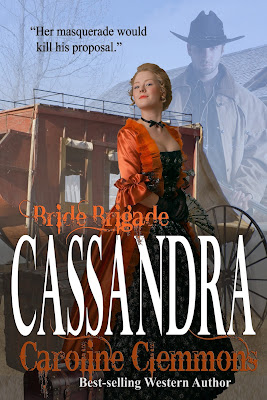 The heroine in my latest release, CASSANDRA, Bride Brigade book 3, traveled in a Concord coach from Fort Worth to (fictional) Tarnation, Texas. In fact, all the young women in this series traveled on the same coach. The first was JOSEPHINE, followed by ANGELINE. After Cassandra will be OPHELIA, RACHEL, LORRAINE, and PRUDENCE. All but Angeline, who joined them in St. Louis, traveled from Virginia with Lydia Jane Harrison and her friend Sophie Gaston. Wealthy young widow Lydia went to Virginia to recruit the young ladies to Tarnation so that there would be potential brides for the men of the town to meet and marry. Lydia was tired of being the only young woman in town, plus there were no young children. Bachelors were moving away, and she didn’t want that to continue.

The first of this series, JOSEPHINE, is now only 99 cents. The buy link is here for Amazon, although it’s available on iBooks, Kobo, and Barnes and Noble.

CASSANDRA is only at Amazon here.

Caroline Clemmons is an award winning and bestselling author of historical and contemporary western romance. She and her husband live in cowboy country in North Central Texas where they are owned by a menagerie of rescued pets.
Find her on her blog, website, Facebook, Twitter, Goodreads, Google+, Pinterest, and her books at her Amazon Author Page.
Subscribe to her newsletter here to receive a FREE novella of HAPPY IS THE BRIDE.