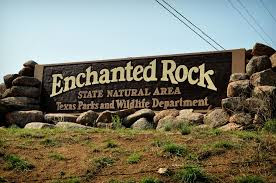 Visitors to Texas look for the most iconic and popular areas to spend vacation time. Of course, The Alamo is at the top of the list. Every large city has its own unique attractions.

Some visitors, though, look for outdoor activities…camping, surfing/swimming, and hiking. A special place to hike and camp is the Enchanted Rock State Natural Area. This state owned and protected place is near Fredricksburg, Texas on Ranch Road 965.


Visitors can hike, backpack, camp, rock climb, picnic, bird, study nature, geocache, and stargaze.  However, you may not swim here or ride bikes on the trails.
Rock climbers must check in at park headquarters. You can pick up route maps there and read the climbing rules.
Entrance Fees—Adults: $7, Child 12 years and under: Free.

Enchanted Rock is an enormous pink granite pluton batholith located in the Llano Uplift. It covers approximately 640 acres (260 ha) and rises approximately 425 feet (130 m) above the surrounding terrain to elevation of 1,825 feet (556 m) above sea level. As a comparison, 640 acres equals about one square mile. It is the largest such pink granite monadock in the United States.

The overall park system includes 1,644 acres. It is designated a Recorded Texas Historic Landmark in 1936. 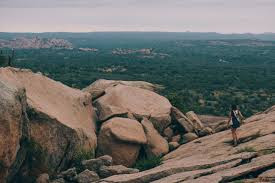 Archaeological evidence indicates human visitation at the rock going back at least 11,000 years. These hunter-gatherers had flint-tipped spears, fire, and stories. With these resources, some twelve thousand years ago, the first Texans became the wellspring of Plains Indian culture.

Folklore of local Tonkawa, Apache, and Comanche tribes  ascribes magical and spiritual powers to the rock. While attempting to hide from Anglo settlers in the area, the natives would hide on the top two tiers of the rock, where they were invisible from the ground below. 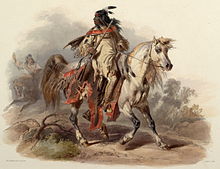 The Tonkawa, who inhabited the area in the 16th century, believed that ghost fires flickered at the top of the dome. In particular they heard unexplained creaking and groaning, which geologists attribute to the rock's night-time contraction after being heated by the sun during the day. The name "Enchanted Rock" derives from Spanish and Anglo-Texan interpretations of such legends and related folklore; the name "Crying Rock" has also been given to the formation.

AND now, for the rest of the story:

From its summit in 1841, Texas Ranger Captain John C. Hays (Jack Hays), while surrounded by Comanche Indians who cut him off from his ranging company repulsed the whole band and inflicted upon them such heavy losses that they fled. Standing at only 5’8” with a small wiry body, he was known as one the most fierce fighters in the Texas Rangers. Young Flacco, the Lippan Apache chief who rode as Hays's closest comrade on his early forays against the Comanche, described him best: "Me and Red Wing aren't afraid to go to hell together. Captain Jack, he's too mucho bravo. He's not afraid to go to hell all by himself." 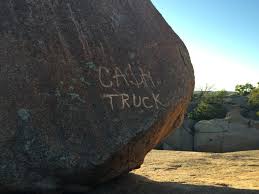 A RECENT CRIMINAL EVENT: On March 20, 2016 an adult couple—not teenagers—climbed the rock and at the top found a huge boulder where they painted graffiti that read CASH TRUCK. The S is written as a dollar sign.
The pair shared a picture of themselves in front of the graffiti on social media, which led to the pair being identified.As it turns out, this couple is well known to the local authorities for other offenses. He is known as “TRUCK”, and she is known as "CASH." Both were arrested for felony graffiti and face up to two years in state jail and up to a $10,000 fine if convicted.

A SIDE STORY:Our son, DIL and three sons from Michigan visited Enchanted Rock while spending some vacation time with us here in San Marcos. The year was 2010. They spent all day at Enchanted Rock and all five climbed to the top—which is not easy, even with make-shift trails.
From left to right:
Bart, our son, born and raised in Texas and is familiar with all the nature sites in the area: Nathan, then 6; Daniel, then 11, and Aaron, then 12; and Debbie, our DIL. 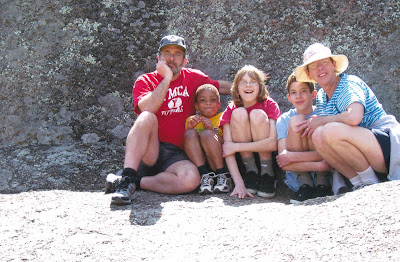 Thank you for visiting Enchanted Rock with me!

Romance...and a little bit 'o Texas
Amazon: https://www.amazon.com/author/celiayeary
My Website
My Blog
Sweethearts of the West-Blog
My Facebook Page