History of the Cowboy Hat by Cheri Kay Clifton

Sweethearts, after writing this blog and getting ready to publish it, I was chagrined to see that Celia had written a very interesting post about the cowboy hat last month which I obviously had missed reading while I was traveling without my computer.  I apologize for any repetition about the history of the cowboy hat, but rather than delete the article, thought there's enough different info worth keeping it.  And my apology to Celia, please forgive my oversight.

The cowboy hat is recognized around the world as a symbol of the American West. Vaqueros and Texans wore broad-brimmed felt hats long before John B. Stetson made his first trip to Colorado. The Spanish influence was so pervasive in the West that mail order catalogs, as late as 1900, still referred to the hat of the "cow boy" as a sombrero.
Felt hats were, and still are, made from the fine hair of beaver, rabbit, and other small mammals to withstand the elements. The processed hair is compressed into felt and emerges as a cone-shaped hat body. Hat makers use steam to mold the hat body over a form or hat block. Early hats came in black and natural-fur colors, with white and color-dyed selections appearing on the market after 1920.

It is not clear when the cowboy hat began to be named as such. Westerners originally had no standard headwear. People moving West wore many styles of hat, including top hats, derbies, remains of Civil War headgear, sailor hats and everything else.
Credit for the American cowboy hat as it is known today is generally given to John Batterson Stetson. His family had manufactured hats in New Jersey since 1790, but when John Stetson established his shop in Philadelphia in 1865, he had his eyes on the West. Cattlemen needed hats that would protect them from the elements and not fall apart. Stetson supplied quality felt hats in popular styles. Though other hats were available in the West, Stetson was the largest producer   and a genius at creating and marketing what became known as the “Boss of the Plains.” 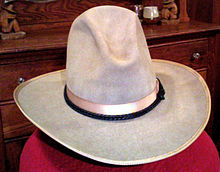 Thanks to its durability, the hat was ideal for the demands of the working Westerner and became incredibly popular.  The charisma of the West was carried back East when adventurers returned in the expensive “Boss of the plains” style hat.  In the 19th century and first half of the 20th century, a hat was an indispensable item in every man’s wardrobe. Stetson focused on expensive, high-quality hats that represented both a real investment for the working cowboy and statement of success for the city dweller. 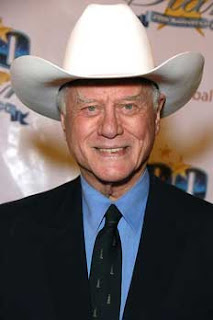 Some cowboy hats have been called "ten-gallon" hats. The term came into use about 1925. There are multiple theories for how the concept arose.
One theory is that the term "ten-gallon" is a corruption of the Spanish modifier tan galán, which loosely translates as "really handsome" or "so fine". For example, un sombrero tan galán translates as "such a fine hat".
Another theory is that the term "ten-gallon" is a corruption of the Spanish term galón, which means "galloon", a type of narrow braided trimming around the crown, possibly a style adapted by Spanish cowboys. When Texas cowboys misunderstood the word galón for "gallon", the popular, though incorrect, legend may have been born. According to Reynolds and Rand, "The term ten-gallon did not originally refer to the holding capacity of the hat, but to the width of a Mexican sombrero hatband, and is more closely related to this unit of measurement by the Spanish than to the water-holding capacity of a Stetson.”
Stetson Hat Company boasted that the tight weave of most Stetsons hats made them sufficiently waterproof to be used as a bucket. Early print advertising by Stetson showed a cowboy giving his horse a drink of water from a hat.  However, even the Stetson Company notes that a "ten-gallon" hat holds only 3 quarts.
The durability and water-resistance of the original Stetson obtained additional publicity in 1912, when the battleship USS Maine was raised from Havana harbor, where it had sunk in 1898. A Stetson hat was found in the wreck, which had been submerged in seawater for 14 years. The hat had been exposed to ooze, mud, and plant growth. However, the hat was cleaned off, and appeared to be undamaged. 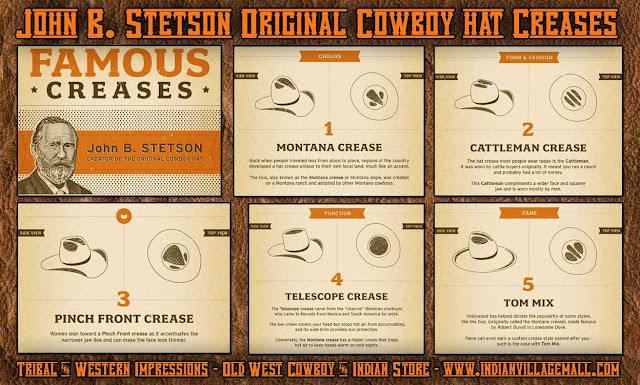 Creases in cowboy hats are used to give hats individual character and to help users identify with a particular subculture. Creases and dents make it easier to don or remove the hat by grasping it by the crown rather than the brim. A very popular crease used on modern cowboy hats is the Cattlemen. It is creased straight down the center of the crown with a dent on each side. Returning in popularity is the Carlsbad crease, now often called a "Gus crease" after the character Gus McCrae in Lonesome Dove. It maintains a high crown at the back with the crease sloping steeply toward the front. The rodeo crease, the bullrider's crease (Formerly called the RCA crease, for the Professional Rodeo Cowboys Association), the quarter horse crease, and the “tycoon", with a pinched front, are also seen today. 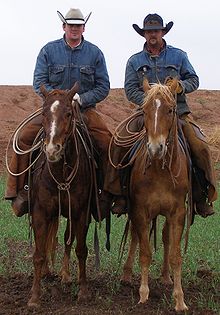 Over time, the cowboy hat underwent changes in shape to better suit the needs of its owner and evolved into the form we are more familiar with today. The brim curved up on the sides to stay out of the way of a lasso, and the crown became pinched to allow better control.  Often a more decorative hat band is added.  In some places, “stampede strings” or wind strings” are also attached.
Today the cowboy hat has become as much a part of fashion as it is function. Adorned by cowboys, cowgirls, rodeo athletes, musicians and movie stars alike, the cowboy hat is a truly traditional item of the West.
So Sweethearts, knowing many of us have pictured our handsome heroes in our books tipping their cowboy hats to the ladies as they passed by, I’ll conclude this post with the rules John B. Stetson Hat Company dictated when a gentleman should tip his hat and when he should remove it.

Tip your hat:
If a woman thanks you
After receiving directions from a stranger
If you excuse yourself to a woman
When walking with a companion and he greets a woman not of your acquaintance

Remove your hat:
During the playing of the National Anthem
Upon entering a building
During an introduction
When attending a funeral
When initiating a conversation