“For nearly 5,000 years, people have lived in these canyons - longer than anyone has lived uninterrupted anywhere on the Colorado Plateau.  In the place called Tseyi, their homes and images tell us their stories. Today, Navajo families make their homes, raise livestock, and farm the lands in these canyons. The National Park Service and Navajo Nation actively work together to manage park resources.” ~ National Park Service.

Canyon de Chelly National Monument (pronounced de Shay) was established on April 1, 1931 as a unit of the National Park Service. Located in northeastern within the boundaries of the Navajo Nation, the monument is comprised of three canyons: Muerto, and Monument.

﻿
These canyons were cut by streams that spring from the Chuska mountains east of the monument. The land belongs to the Navajo Nation. Canyon de Chelly National Monument is one of the most visited national monuments in the


Canyon de Chelly's most unusual geological feature is Spider Rock, an 800-foot sandstone spire that juts from the canyon floor.
﻿
﻿
Now I will let Josie Tseda, the Navajo heroine of CAPTURING GABRIEL, tell you a little about her homeland as she takes Gabriel on a tour of the canyon. You might call this book a modern day western, set mainly in the rugged mountains of Colombia with horses, gunplay and sexy romance. Eventually, it comes home to Canyon de Chelly. 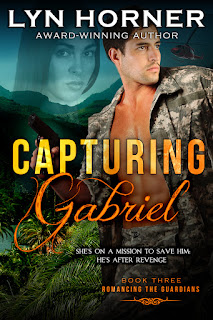 US: http://tinyurl.com/gry3oq4    UK: http://amzn.to/1WFRYLE
CA: http://amzn.to/1Rcc6wU
As Josie drove, she pointed out pueblo ruins built into the rock walls and petroglyphs – paintings and etchings created by ancient peoples who once lived in Canyon de Chelly.

“The canyon is one of the longest continually inhabited areas in , so archaeologists say. The Anasazi, our Navajo word for ancient ones, built the pueblos, but other, older ones, lived here long before them.”
“Do you trace your roots to those ancients?” Gabriel asked.
“No, they were the ancestors of the and Hopi people. We Navajo come from a different line called Athabaskan. It is said our old ones migrated from the far north hundreds of years ago. They settled in and parts of and traded with the people.”
“How did the Navajo come to be here in Canyon de Chelly?”
She shrugged. “They warred with other tribes and Spanish settlers who invaded our lands. Many Diné – as we call ourselves – fled into what is now and . Others took refuge in the mountains and canyons. The Spanish found this place, of course, and on a winter day in 1805, their soldiers attacked the Diné living in the canyon. The two sides fought all day. At the end, 115 Navajo lay dead in a cave where they sought refuge. We call the place . It lies in Canyon Del Muerto to our left. I will take you there.”
Gabriel stayed silent while she drove to the site. When they got out to view the cave, he said grimly, “You have reason to hate anyone of Spanish blood, including me.”
She sent him a startled glance. “Don’t be silly. What happened here was tragic but that was over two hundred years ago. It has nothing to do with you and me.”
“Does it not?”
“No, of course not. The Diné fought whites here too, but I don’t hate all white people.” She shivered in the biting wind. “Come on, I’m cold and this place gives me the creeps. Besides, I have something special to show you.” Gripping his hand, she hurried him back to the Jeep.
Sorry for telling him about and making him feel bad, she drove him to the junction of Canyon de Chelly and where Spider Rock soared skyward.
"!” Gabriel exclaimed as she stopped the Jeep.
“Welcome to Spider Rock,” she said, opening her door and stepping out. A blast of wind immediately buffeted her, but she grinned at the look of awe on his face when he joined her to stare up at the eight-hundred-foot-tall tower of stone. “This is the most famous site in the canyon. It’s even been used in television commercials.”
“Amazing! But why the strange name for such an impressive monolith?”
She laughed lightly. “In our creation story, it is said Spider Woman possesses supernatural power, kind of like you Guardians. She loved the Diné and because monsters roamed the land long ago, killing many people, she gave special power to two of our heroes to find Sun-God, their father. Sun-God showed them how to kill all the monsters. Because Spider Woman saved the Diné, she became one of our most honored gods. Her home is said to be on top of Spider Rock.”
“That is a long climb even for a spider woman,” Gabriel said skeptically. “But she has super power. I suppose that makes it easy for her, sí?” Grinning, he drew Josie to his side, sheltering her from the wind.
She wrapped her arm around his waist. “Sure. She also taught us how to weave on a loom. Since then, the Navajo have become fine weavers. But the goddess can be fearsome. As children we are warned to behave or Spider Woman will let down her web and carry us up to her home, where she will devour us.”
“Fearsome indeed!” Gabriel chuckled, eyes glinting as he gazed down at her “But you must have been a good little girl, since she did not get you.”
“Hah! My father might think different.” Giving him a mischievous grin, she was glad to sees she’d managed to lighten his mood. “If you’d like to see the canyon from above, I’ll drive us around the rim.”
“I will enjoy anything you wish to show me, querida.” Turning to face her, he kissed her, warming her better than any fire could.
They returned to the Jeep and she headed back to the canyon entrance. From there, she wended along the , stopping at several overlook points where they got out to gaze at the canyon from above. The last stop was Spider Rock Overlook.
“What a magnificent sight,” Gabriel said. “I see why you love this land.”
“Yeah, it is gorgeous,” she agreed.
“Sí, most gorgeous.” He spoke in a soft, caressing tone.
Looking up, she found him gazing at her with such adoration that she caught her breath and stared, hypnotized by his moss-green eyes.

***Canyon de Chelly fills an important role in not only Capturing Gabriel, but in the entire Romancing the Guardians series.
Find all of my books here:  Amazon Author Page
My Social Sites:
Website   Twitter   Facebook   Goodreads   Google Plus
Posted by Lyn Horner at 5/20/2016