Handbag fetish or addiction, no matter what you call it, I have it. Yes, I admit it and it's worse than my shoe addiction. Yikes! Geez, this may be worse than I originally thought. But hey, I can't be the only one, right???

Anyway, that's what sprung this idea for our talk today. Purses have shown up throughout time in many shapes and forms. From the earliest of time, both men and women carried pouches to carry sundry bits of importance, like seeds, items of religious significance and medicines. They were made of bits of animal skins, later cloth, and knitted string to look like net. Each might be decorated to personal tastes with shells, feathers and the like. Traditional wallets began as early as the 16th century, as small leather pouches with a drawstring with which to tie to a belt loop. Women carried sweet bags that held lavender or other scents to freshen their clothing and handkerchiefs. It was around this time pockets were introduced into clothing to carry small personal belongings.

Women also carried bags tied around their waists and worn under their skirts, as seen above.

The mid-1800s showed a variety of handbags from the beaded and embroidered drawstring to a flat style that could be either square or circular in design.
.

Patterns for these were offered in popular ladies magazines of the day.

Early 20th century saw another change in the style of handbag carried by the modern woman. Two purses I'll share with you belonged to my grandmother, Faith, and her sister, Stella. 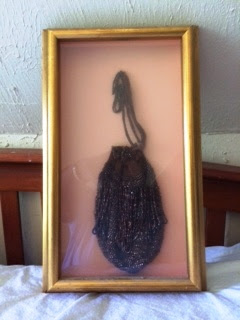 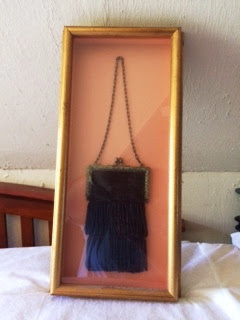 During World War II, shoulder bags became popular and have evolved to include over the arm, clutch, crossbody and tote. Some men briefly carried a messenger or casual bag in the 70's and even today they might be seen carrying one, but purses or handbags are largely used by women. I know I usually carry the kitchen sink. I want to have anything for any situation, a hold over from my mom days, I suppose.

This past weekend, Mother's Day, my som graciously bought me a shiney new handbag that caught my eye at the leather store at Grapevine Mills Mall. It's turquoise with silver hardware. I obviously needed it, and it's prreeetttty. Don't you agree? 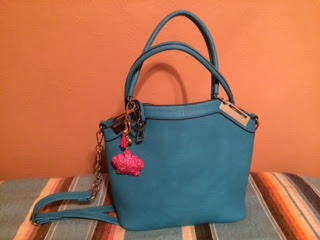 Well that's what I have to say today. Chime in and let me know what you think. Do you get as ga-ga as I do over a purse or is there something else that trips your trigger?

I'd like to wish all a happy belated Mother's Day!

Hugs to all,
Carra
xoxoxoxo