One of the Oldest Professions

One of the Oldest Professions

Prostitution is known as one of the oldest professions in history, and the trade was instrumental in settling the West. In the lawless West, women were barred from most jobs and wives had no right to own property, however, madams owned large tracts of lands. Prostitutes made the highest wages of all American women, and some madams funded irrigation and road-building projects.

Prostitutes won and enjoyed the freedoms denied a married woman or women in general. Before employer offered health was a reality, madams provided their employees with free health care, as well as room and board.

In the movies, we often see prostitutes as the victims of violence, alcoholism, and drug abuse. And this did happen often, especially in some of the earlier establishments. In a time when women were told they couldn't protect themselves from violence, and women had no legal recourse against spousal rape, many madams hired police officers to protect the women who worked for them.

Though contraceptives were banned, prostitutes made possible their production and distribution. Doctors would make condoms available to single men to keep them from catching a disease, but were denied them to prevent pregnancy in their wives.

Women were taught they belonged in the "private sphere," and couldn't travel unattended. Prostitutes traveled at will by themselves and were brazenly "public women." When social dancing became popular in the 1910s and 1920s, prostitutes invented many of the dance steps that were fashionable in the era. The makeup, clothing, and hairstyles of prostitutes, which were maligned for their overt sexuality, later became fashionable among American women—red lipstick, short fringed dresses, and short hair cuts.

A study by the U.S. Department of Labor in 1916 found that the major legitimate occupations for women were department store clerk and light manufacturing. Their average weekly salary was $6.67. Since there were many women who needed work, the over supply pushed wages down to a minimum. However, the demand for prostitution was enormous, especially in the West, and the number of workers was kept small due to the fear of stigmatism.

According to historian Ruth Rosen, "'The average brothel inmate or streetwalker"—the lowest positions in the trade—"received from one to five dollars a 'trick,' earning in one evening what other working women made in a week.'" In a 1916 study, prostitutes made between $30 and $50 per week, while skilled male union workers averaged $20 a week.

This information was paraphrased from excerpts from the chapter —"How 19th Century Prostitutes were Among the Freest, Wealthiest, Most Educated Women of Their Time." A Renegade History of the United States, by Thaddeus Russell, Copyright 2010. Published by Simon & Shuster, Inc.

Women of Controversy in Waco, Texas

The following is from a blog post I wrote in 2010, but since I have several books written about Waco, I'd like to include this.

My time travel romance, MyHeart Will Find Yours, is set in 1880s Waco, Texas, and another time travel romance, Birdie's Nest, is set in 1890s Waco. Located on the Brazos River, in its early history, Waco was known as Six-Shooter Junction. Trail drives herded their cattle across the Brazos in Waco and the cowboys usually spent time in the bawdy houses of the Reservation or Two Street as the red-light district was known. Drinking in the multitude of saloons and card games sometimes led to fights, often involving the use of firearms.

When the suspension bridge opened in 1870, and the railroad arrived in 1871, business in Waco thrived. Trail drives repeatedly lost cattle when herding their livestock across the Brazos. It wasn’t uncommon for a man to be caught in the undertow and drown. Cattle bosses were willing to pay the 50 cents per animal to get their cattle across safely.

In her book, A Spirit So Rare, Patricia Ward Wallace broaches the topic of how women forged a path in the early history of Waco. Her chapter on prostitutes is titled "Women of Controversy". Since prostitution plays a minor role in one my western time travel romances and a major one in the other, I’d like to borrow her title and share some of what I learned.

The first noted record of prostitution in Waco is documented in an 1876 city directory. Matilda Davis of 76 N. Fourth St. is listed as a madam with 10 occupants in her house. The women listed their occupation as actress. Waco had no playhouse at the time. In 1879, the city issued the first license for a bawdy house for an annual fee of $200 and a good behavior bond of $500.

Waco officials legalized prostitution within the Reservation in 1889 making Waco the first town in Texas and the second in the United States to condone a controlled red-light district. Madams paid a yearly fee of $12.50 for each bedroom and $10.00 for each bawd. Prostitutes paid an additional $10.00 license fee and paid the city physician $2.00 twice a month for a medical exam. This guaranteed they didn’t ply their trade outside their designated territory and were disease free. The city prohibited drinking within the area. Fines for violators ranged between $50 and $100. With the large number of prostitutes it’s easy to see the city benefited from trade within the Reservation.

Prostitutes were prohibited from being seen on the streets outside the Reservation yet they were allowed to trade with local businesses. No more than two at a time could travel via a city hack to the stores. Usually tradesmen sent clerks to the curb with merchandise. Some storeowners required the prostitutes to stop at the back door.

Life was hard for these working girls. Violence abounded in the bordellos as did drug and alcohol use and abuse. Though licensed, the police had little to do with the establishments. The madams disciplined the women in their houses and maintained order among their clientele. On occasion the police were called when robberies or assaults occurred. 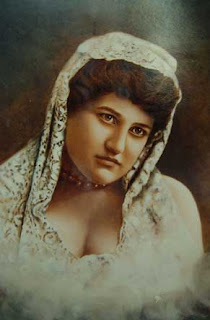 Waco’s most famous madam was Mollie Adams. She had worked in another house but in 1890 opened her own three-room operation. By 1893 she had a seven-room establishment. In 1910 she’d obtained enough wealth to commission a house to be built by the same firm that built the First Baptist Church of Waco and the building now the Dr. Pepper Museum. Her home at 408 N. Second St., had indoor plumbing, electric fixtures, two parlors, a dance hall, and a bell system wired to every room. Her portrait, included here, hung over the fireplace.

Though wealthy at this point in her life, she died in an indigent home in 1944. Lorna Lane, the madam in Madison Cooper’s epic novel, Sironia, is supposedly modeled after Mollie Adams.

In 1917, the US Government ordered cities with military bases to shut down red light districts to protect the health of America’s soldiers. Not wanting to lose Camp MacArthur and its 36,000 troops, the city shut down the Reservation in August of 1917. It is rumored some bawdy houses managed to continue business through the 1920s.

It's interesting to note that the Waco Convention Center sits where the Red Light District, known as the Reservation, was once located.