LIFE IN A DUGOUT

Unbelievable as it might seem, some pioneer settlers liked living in dugouts. Letters and diaries of pioneers recorded that these dwellings were surprisingly comfortable; cool in summer, snug and easily heated in winter. Thick walls and sod roofs supplied good insulation at a time when few people knew the value of insulated homes, and wooden houses lacked in this feature.

Most dugouts consisted of a single room (average 12’ x 12’) dug into the lee side of a low hill. Walls were created by cutting and stacking sod blocks to a height of seven or eight feet. Some dugouts had windows, usually store-bought and hauled from the nearest town. For a roof, cottonwood poles were placed side by side and spread with a thick layer of coarse prairie grass for insulation and to cut down on the dirt that sifted through. Over the grass a double layer of sod building blocks was carefully fitted. The first good rain prompted the sod to grow, and a tall growth of waving prairie grass soon covered the roof, almost concealing it.

Rough wooden planks were laid to provide flooring, if the family could afford to buy them. Otherwise, the floor was dirt sprinkled with water daily and swept with crude grass brooms until the surface was as hard and smooth as finished concrete.

Walls were lined with newspapers pasted or pinned up with small, sharpened sticks to keep the, dirt from brushing off. Some more ambitious families located outcroppings of limestone rock which was burned and mixed with screened sand to provide a plaster coating for the walls—a vast improvement over untreated walls that could not keep out all the dirt, or insects.

Unfortunately, the pioneer dugout couldn't stand up to the demands of prosperity. The fertile prairie sod—turned over in the fall and broken down to mellow richness by winter snows, freezing and thawing—produced bumper crops of corn and small grains. Once a pioneer family had money in the bank, construction of a clap board house became the major goal. Grandma couldn't wait to get her family out of "that hole in the ground" and into a “more suitable” uninsulated clapboard structure: A house that was stifling hot in the summer and poorly heated in the winter by buffalo chips in the kitchen range or costly store bought coal that had to be hauled from town, carefully hoarded and sparingly doled out.

Money provided the means to build wooden houses, but it was the desire to improve the family’s status and supposed living conditions that was the driving force that ultimately destroyed the dugout. Most lasted little more than a decade, but a few pictures still exist, and memories and journals provide records of the dugout's comforts and advantages.  Of course the disadvantages were also recorded.

It might be pointed out that dugouts were the first homes of many homesteaders well into the twentieth century. My paternal grandparents moved from Kansas to the Oklahoma panhandle in 1916 and lived in a dugout until a house could be built. I’m not sure when my mother’s folks did the same thing, but it would have been a bit later. Mother was the eldest of twelve children. Her father was a great farm worker and was in much demand by other farmers. Unfortunately, Grandfather didn’t want to work for other people; he wanted to farm his own land. But without someone to tell him what to do and when, he couldn’t quite seem to succeed at farming. Poor living conditions and sparse food was the result, so the family frequently lived with other family members or inhabited abandoned homes. Many of these homes were dugouts.

Mother told me numerous tales of life in such dwellings and didn’t seem nearly as enamored of them as some pioneers. I used a few of these in my book To Have And To Hold, which will be released in e-book format on January 24th. One has to do with 7” long centipedes that managed to find their way down onto the newspaper Grandmother tacked onto the ceiling to keep out some of the dirt. The sound of their feet scratching on the paper drove Grandfather crazy. Mother’s complaint, besides the dirt, was snakes. She hated it when her mother asked her to fetch wood from the wood box because too often a resident rattler would be hiding inside. Of course, snakes liked nice warm beds too, and the pallets laid on the floor where the children slept were very convenient. Frankly, I’m glad it was my mother and not me who had these experiences.

Have any of you heard any similar stories from your grandparents or great-grandparents?

Be sure to leave a comment, and include your contact information, for a chance to win a $5 Amazon gift card and a free copy of To Have And To Hold. 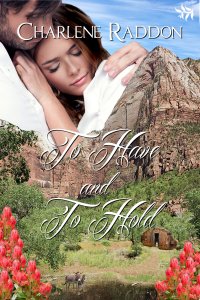 Charlene first serious writing attempt came in 1980 when she awoke one morning from an unusually vivid and compelling dream. Deciding that dream needed to be made into a book, she dug out an old portable typewriter and went to work. That book never sold, but her second one, Tender Touch, became a Golden Heart finalist and earned her an agent. Soon after, she signed a three book contract with Kensington Books. Five of Charlene's western historical romances were published between 1994 and 1999: Taming Jenna, Tender Touch (1994 Golden Heart Finalist under the title Brianna), Forever Mine (1996 Romantic Times Magazine Reviewer's Choice Award Nominee and Affaire de Coeur Reader/Writer Poll finalist), To Have and To Hold (Affaire de Coeur Reader/Writer Poll finalist); and writing as Rachel Summers, The Scent of Roses. Forever Mine and Tender Touch are available as e-books and after January 24, To Have and To Hold will be as well. When not writing, Charlene loves to travel, crochet, needlepoint, research genealogy, scrapbook, and dye Ukrainian eggs.
Find Charlene at:
http://www.charleneraddon.com
http://www.charleneraddon.blogspot.com
http://www.facebook.com/CharleneRaddon?ref=hl
Charlene's e-books on Amazon.com

Labels: Charlene Raddon, Dugouts, houses, pioneers, prairie life, Sweethearts of the West, TO HAVE AND TO HOLD
Email ThisBlogThis!Share to TwitterShare to FacebookShare to Pinterest