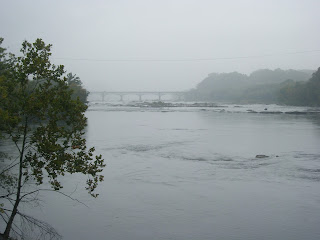 Harper’s Ferry is a place of confluence....where the Shenandoah and Potomac Rivers meet, as well as the states of West Virginia, Maryland, and Virginia. We had the amazing privilege to visit this “hidden treasure” while on a tour of the East Coast a while back and enjoyed a picture-perfect yet drizzly day in the place best known for John Brown, the abolitionist, and his raid upon the armory in 1859.

We ate our picnic lunch in the armory’s fire engine and guardhouse, all that’s left of the original establishment. 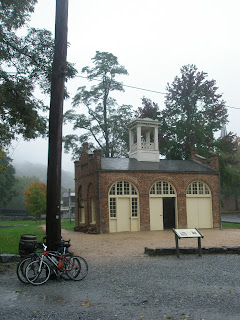 In 1761, a colonist named Robert Harper started up a ferry across the Potomac in this spot, making the town a starting point for settlers moving into the Shenandoah Valley.

The town’s importance increased when the armory was commissioned in then-state Virginia, about 1799. It was only the second U.S. armory and in fact, was both armory and arsenal --an arsenal being the place for storage and production of large arms such as cannons and howitzers. An armory mostly manufactures and stores small caliber rifles and carbines. The first military arms started production about three years later. 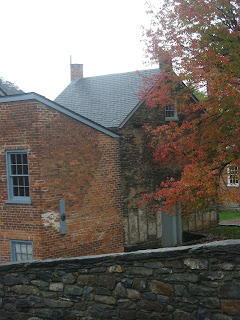 The armory helped transform the town into an industrial powerhouse for sixty years, from 1801 to its destruction in 1861 to prevent its capture during the Civil War. During these years the armory produced more than 600,000 firearms including the first breech-loaded rifle adopted by the army.

Progress continued when the railroad reached Harpers Ferry in 1833, providing a link to Washington D.C.

Back to Mr. Brown (1800-1859). His raid on this armory electrified the nation, got him tried for treason against the Commonwealth of Virginia (where some proclaimed him a hero) and executed on December 2. Although Abolition was a hot topic in the mid 1800’s, most Northerners supported peaceful resistance to their Southern fellowmen who were pro-slavery. 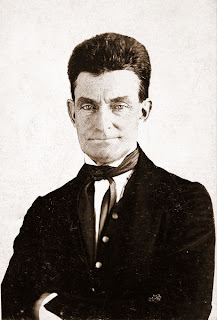 John Brown, however, demanded violent action against slavery. He claimed he was the instrument of God’s wrath” in punishing slave owners for their sin of owning other human beings.

Under the name Isaac Smith, and with a small band of men with minimal military training (supposedly 16 white men, 3 free blacks, 1 freed slave and 1 fugitive slave) he attempted to seize the armory and use the weapons to arm slaves. However, his attack on October 16, 1859 failed. Seven people were killed, ten more injured. Thirty six hours later, his men had run off or been killed and captured by pro-slave farmers, militia, and U.S. Marines led by Robert E. Lee.

Historians agree that Brown’s raid played a major role in the state of the Civil War.

The armory supplied arms to Virginia until its secession and remained a strategic site for its place on the Potomac as well as proximity to the Mason Dixon Line. Today the site of the armory is mostly railroad embankments. The building that survives was the armory’s fire engine guardhouse. 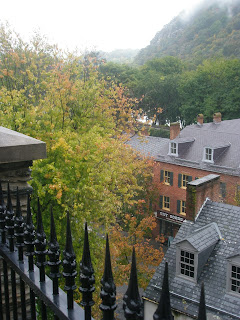 The town itself is beautiful. From the commanding location of St. Peter’s Roman Catholic Church in the hills above Harpers Ferry, one can see forever, it seems. The original 1833 church is the only church in Harpers Ferry to escape the Civil War, but it was remodeled in the 1890’s into the Neo-Gothic style popular at the time. 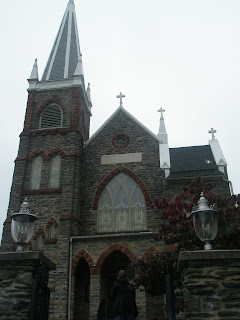 It was a great day in Harpers Ferry with its combination of history and beauty.

Even if I'm not one much for stairs!