A Cowboy and His Rope


I was given a great book by my sister for Christmas – COWBOY LINGO by Ramon F. Adams.  This author’s name is familiar to me, so I think I have another book by him, but I haven’t gone to look on my shelf of western books to see if I do.  COWBOY LINGO is “a dictionary of the slack-jaw words and whangdoodle ways of the American West.”  It’s not your usual dictionary, as this book spends a whole chapter describing things.  I choose one of the shorter chapters’ (only 11 pages long) – Ropes and Roping.  I have learned more about ropes than I ever thought I needed to know. 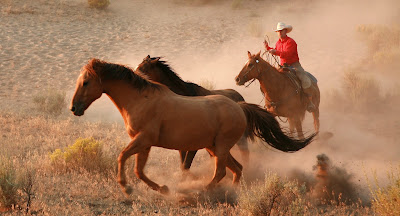 Adams says “The rope is so essential to cattle work that without it there would have been no cowboys.” A rope was an extension of the cowboy himself.  Almost any man could easily learn to ride, or ‘bulldog’ a steer, but learning to work a rope was very hard to attain.  It took years of practice to master this appendage of a true cowboy.

Ropes were not made of the same material in different parts of the country and the material is what gave different names to a cowboy’s rope.  “In California, Nevada and eastern Oregon, the sixty-foot rawhide reata is still in use. In Texas, the rawhide rope has practically disappeared, replaced by a thirty-five-foot length of ‘manila,’ mostly of softer fiber and looser twist than is used in other states.”  One splendid rope is the Mexican maguey (pronounced McGay).  It is made from the fiber of a century plant.  However, it is an extremely stiff rope, so ropers don’t care for it. 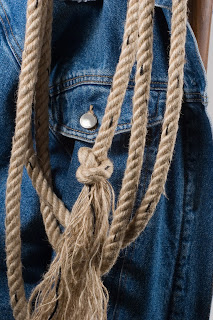 A ‘hair rope’ kinked too easily and was too light to throw, so a cowboy didn’t like to use it as a ‘reata.’  It was however, very pretty and was used as saddle reins and tie rope.  Hair ropes were rarely longer than twenty-five feet and one made from alternating black and white strands of horsehair was called a ‘salt-and-pepper.’


The length of a rope depended on its duty.  A shorter rope would be used for steer- and calf-roping and corral work, including branding.  The longer ropes were for ‘outside catching’ such as wild stock and also “where the roper ‘dallies’ his rope around the horn of the saddle instead of tying fast.”


The thickness of the rope also depended on its duty. Seven-sixteenths hard twist pure manila would be used for steer-roping and other heavy work. For light work, three-eighths manila or cotton or Mexican maguey were preferred.


However, a new rope is of no use at all.  A rope had to be seasoned, stretched or suppled and the loop knot pulled down. A new rope might be drawn over a fire or torch to burn off the whiskers.  Once it was stretched, “they became a thing of life in the hands of a ‘smooth’ roper.’”  He could make it ‘sing,’ meaning it would make a ‘hissing’ sound as the loop was thrown. 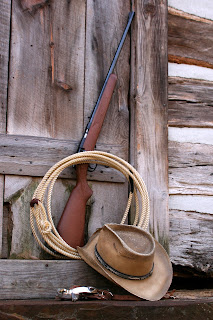 Easterners liked to think a rope had many exotic names: lasso, lariat or reata, but cowboys called it a rope, though they did use slang names, such as “ ‘lines,’ ‘clothes lines,’ ‘string’ ‘hemp,’ ‘manila,’ ‘whale line,’ ‘lass rope,’ ‘twine,’ ‘cat-gut,’ and many others.”  A lariat was sometimes called a ‘ketch-rope’ to distinguish it from other ropes.


A lariat was primarily used to tether or picket animals, particularly if it was a horsehair rope. The term ‘reata’ is a contraction of Spanish la reata, which translates, literally to ‘the tie-back.’ The word ‘lasso’ comes from the Portuguese laco which translates to ‘snare.’


Adams tells us, “The knotted or spliced eyelet at the business end of a rope for making a loop was called the ‘honda.’” This Spanish term refers to a “receptacle in a sling for holding a stone or other article to be thrown.”  Experienced ropers preferred to make their own honda because the bone or metal used in a manufactured one could injury an animal.


Wow, this is from just the first few pages of this chapter!  I can see that I’ll be referring to COWBOY LINGO for my blogs often in the future. I hope you learned a few things. I know I did!

Never let your memories be greater than your dreams. ~Doug Ivester
Posted by Anna Kathryn Lanier at 1/14/2013