Singing Cowboys in the 1940s 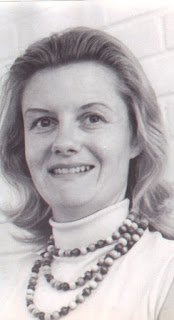 In the early 1940's my younger sister and I received a magical gift - a Victrola, the kind we had to wind up, put a big, black 78 rpm record on, lift the needle onto the record and then we would sit back and listen spellbound to our favorite cowboy heroes sing. The early Victrolas, like ours, were wind-ups because there was a general shortage of available electricity at that time.

The only drawback to the nostalgic childhood scene was we didn't agree on which singing cowboy to listen to.
I loved Gene Autry's songs, and I could listen to his words "I'm back in the saddle again" over and over, countless times, singing along with Gene, and never get bored.
My sister, on the other hand, only wanted to hear Roy Rogers sing.

For years there, my parents had no problem deciding on birthday and Christmas gifts for us.  If there was a new Gene Autry or Roy Rogers record out, it was a given. We could always be found gathered close around our Victrola playing one or the other of our cowboy records.

In between the availability of a new record, our parents had fallen into the habit of taking us downtown to the movies once a week when the movie changed. We saw every Gene Autry and Roy Rogers movie that we knew about, and some of them more than once. Our older brother and sister went to the movies with Dad, Mom and us, but I don't remember any other films we watched in those days except cowboy movies. Dad would select seats, seat all of us, not always together because the films were so popular the movie theater was crowded, and then he would purchase we kids one sack of popcorn each and one for himself. My mother might take a taste or two of Dad's but she wasn't a popcorn eater.  We looked forward all week to Friday night at the movies. 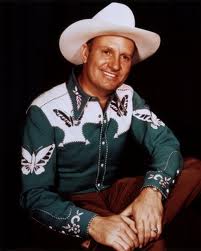 Gene Autry, born 1907 in Texas, was a musical western star first. He was discovered in 1929 by humorist Will Rogers.  The first record ever certified gold was one of Gene Autry's.
Autry's singing career was interrupted 1942 - 1946 while he served in the War. He wrote more than 300 songs, including Rudolph the Red-Nosed Reindeer which became an all-time Christmas single, and still is, along with several other Christmas songs he wrote and recorded. 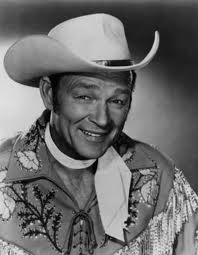 Roy Rogers, whose real name was Leonard Franklin Slye, was born 1911 in Ohio and he performed with several bands in his early singing years. He came to be known as "King of the Cowboys" after he appeared in a film by that name together with his palomino horse Trigger. His big break came when he was cast to replace Gene Autry in the 1938 film "Under Western Stars." The film was an instant hit with audiences, and Roy was on his way up.

In the 50's, film episodes of both cowboys appeared in the early days of television,
as well as those of other cowboy stars like Hopalong Cassidy and the Lone Ranger.  I would sit riveted to the small black and white television screen in our Kansas living room, with the sound turned up loud, always placing first dibs on Gene Autry if one of his films was showing.  As it happened, they never had a Gene Autry and a Roy Rogers film showing at the same time, so there was no fussing between my sister and me over which we were going to watch.

Our father worked hard at his day job and often came home wanting a nap after work with the radio playing whatever he listened to back then.
Whenever a new singing cowboy film was playing, I was the one elected by my siblings to ask him if we could go to the movies, they taking advantage of the fact Dad knew I couldn't hear the radio at home but I could both watch the story and hear the loud volume in the movie theaters back then. But I didn't mind being front person to make the request - if Gene Autry was playing I wanted nothing more than to go to the movies!

My younger sister and I were playing out on the sidewalk in front of our frame Kansas City house one day, shaded by our tree that we called the lady cigar tree because of the long, thin, green growths that hung down from its branches.

I looked up in time to see this wonderful, smiling cowboy in full western gear ride his horse down the paved street toward us. I was mesmerized when he pulled his horse to a halt, raised his hat in salute, grinned, and nodded at us. He stood tall in the stirrups of his silver-plated saddle before he sat back down, started his horse moving again and then rode on past us out of sight.

Sadly, we were both too young to remember many details, but I have always thought it was Gene Autry who unexpectedly rode down our street that day and smiled at us.
~~*~~*~~ 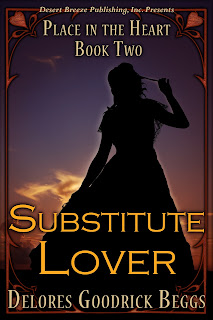 Tennyson Wells has led a sheltered life and become the belle of Mescal Flats, New Mexico until she experiences a rude awakening at the hands of bad boy Jasper Greon, who dumps her, stranded and alone on a deserted road with night fast coming on when she thinks he is going to marry her.

Caleb Cameron has searched for days before he finds her sleeping on boardwalk stairs and takes her home. Caleb loves Tennyson and wants to marry her, but he hasn't spoken up about his feelings. When Jasper Greon returns to town and convinces Tennyson to join in his larks again, Caleb has reached the end of his rope; it is evident Tennyson can't say no to Jasper.

He has played second fiddle to Jasper all he intends to. Something has to be done, if he is to stay around.
~~*~~*~~

Show Excerpt: Substitute Lover
When she looked up at him, he clamped his mouth shut. "I heard Jasper had left town with you, and then it took me a while because you weren't in any of the places I expected to find a lady."

"I'm so glad you found me." She smiled and stroked his arm.

"We've got to talk, Tennyson. Have you eaten any breakfast?"

Her stomach rumbled at the mention of food.

"I guess not. Let's see to you, first." Caleb looked her up and down, and then turned her around. His big hands brushed down her long skirt. Bits of hay and dust fell onto the ground. Next, he fumbled with her hair.

"Let me." She lifted her hands to tuck the stray locks away, refreshing her dignity back into place before he escorted her to the stage stop for breakfast. "Is this better?" She turned her questioning gaze on him.

He narrowed his eyes and then he smiled. "A bit dusty, but any traveling lady would be. Let's go eat at the stage depot. Oh." He paused, and looked into the distance, chewing on his lip. He rubbed the toe of one flat-heeled boot in the dust. He sighed, then looked down and met her gaze. "Is there a ring on your finger?"

The intensity of his gaze bored into hers.

"Why, no." She paused, her voice whispery as she stretched her hands out for him to see. "We never found the preacher, so we didn't get married." She swallowed. "And then Jasper left."

He quirked his mouth in a cynical grin.

"I'm not Jasper, but will I do for now?"
~~*~~*~~
Released December 21, 2012 from Desert Breeze Publishing:
Place in the Heart Book Two: Substitute Lover
By Delores Goodrick Beggs
Find it at:
http://goo.gl/X3f5l (www.desertbreezepublishing.com)
http://goo.gl/1oqYI (Amazon.com)

Coming June, 2013 - Place in the Heart Book Three: Perfect Tenderfoot
~~~*~~~
Delores will give away an ebook copy of SUBSTITUTE LOVER to one person who comments. Please leave a comment and an email address, should you win her gook.

THANK YOU, DELORES, FOR VISITING SWEETHEARTS OF THE WEST.
Celia Yeary
Posted by Unknown at 1/08/2013