Ice cream was once a delicacy

Before 1846 making ice cream was a drawn out process.  A bowl was filled with cream, then nested in another bowl filled with ice or snow and the cream was whipped vigorously while shaking both bowls up and down.  Not only was it an arduous task but the need for ice or snow would be another detriment to making the loved dessert. 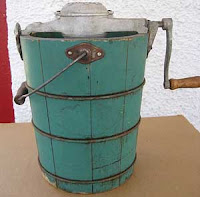 President George Washington loved the creamy dessert. $200 was spent in the summer of 1790 to keep him in ice cream. There were two pewter ice cream pots kept in the Mount Vernon kitchen to make his favorite dessert.

Even the temperance movement applauded ice cream. They thought it the perfect treat to persuade an alcoholic to stop drinking.

Godey’s Lady’s Book said, “A party without ice cream would be like a breakfast without bread or a dinner without roast.”

The treat was thought as such a treat and emotionally uplifting that the Civil War was when the military began serving it to troops to boost morale.

I think it’s sad that the woman who made so many people happy with her invention didn’t profit from it. In 1846 Nancy Johnson invented a simple hand-cranked freezer that made it easier for people to make ice cream at home. Unfortunately she never patented the invention. I've often wondered how many intelligent people who invented items we use every day never profited from their ingenuity.

As a child we rarely made ice cream because we sold our cream to a creamery and bought 5 gallon tubs of ice cream from them. But as an adult I’ve made it several times.


What is your favorite flavor of ice cream? Have you ever made it?