Gangs of one type or another have been around since the beginning of time, pillaging, robbing and often leaving death in their wake. In some sense, the outlaw gangs of the old west have been romanticized—almost like Robin Hood. In fact, most of these gangs were thugs, and terrorized people with their evil behaviors, and more often than not, thought of no one but themselves.

After his capture at Stinking Springs, Billy the Kid supposedly told a Las Vegas reporter: “I wasn’t the leader of any gang. I was for Billy all the time.”  (Note: Legend has Billy the Kid killing 21 men by the time he died at the age of 21, however, it’s estimated he killed between 5 and 9.)

The flip side is these outlaws also had families. Some claimed they took to their outlaw ways because of misdeeds done to loved ones, and others claimed it was the only way they could feed their families. Whatever the cause may have been that led them down that road, their behaviors affected many others. Friends and family were blamed and ostracized because of their relationships with these outlaws, and had tough rows to hoe.

Some found that way of life exciting: It’s said Belle Starr, though well educated and from a rather prominent family, chose to lead the life she found so enticing because of her childhood friend Jesse James. Others fought to turn things around: Cole Younger sold headstones after his release from prison and eventually became a preacher, which was his occupation upon his death. 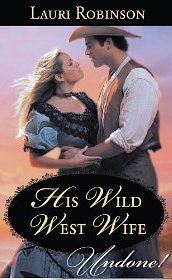 In my February 1st release, His Wild West Wife, I used the dilemma of being the daughter of an outlaw for my heroine Clara Johnson. Clara wanted nothing but to distance herself from her outlaw family, went so far as to turn her father in, but not even traveling across the country could erase her past. Hero Blake Barlow has his own demons to bury, though his mother wasn’t an outlaw in the sense of the word, she was a brothel owner, and he, too, had spent years covering up his past.

Chicago lawyer Blake Barlow has tracked his runaway wife all the way to the middle of nowhere. If she wants a divorce, he'll grant her one—as soon as she tells him why she left.

Clara Johnson is angry. Blake betrayed her mere weeks after exchanging vows—but when he rides up to her family farm, it's to get her signature, not to beg for forgiveness.

Clara and Blake agree their brief marriage was an impulsive mistake—but that doesn't stop the passion between them from flaring as hot as ever...