The Doss Heritage and Culture Center by Bea Tifton 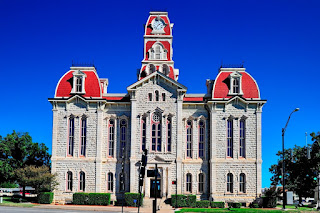 The town of Weatherford, Texas, is located in Parker County, Texas. Parker County was created in 1855 and named for the pioneer Isaac Parker, who was the uncle of Cynthia Ann Parker, the woman famous for being stolen by the Comanches and eventually becoming the mother of Comanche Chief Quanah Parker.  Weatherford was named for the Texas state senator Thomas Jefferson Weatherford (1811-1867). Weatherford is located 30 miles west of the city of Fort Worth. It's in West Texas and is still ranching and cattle country, rich with the history of cowboys and ranching.

The Doss Heritage and Culture Center's website reads that it is a "Texas and Parker County History museum dedicated to bringing history to life for all generations to experience and enjoy."  Three years ago, my friends and I did just that.

The first exhibit is the original chuckwagon, created in 1866 by legendary cattleman Charles Goodnight. I've heard of chuckwagons and seen pictures, but it was fascinating to see the first one. 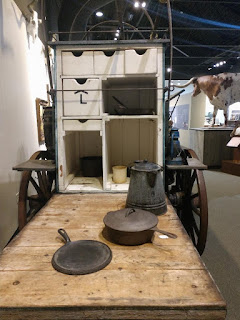 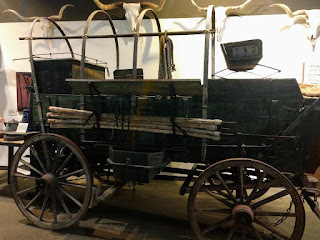 The museum has a covered wagon. What struck me is that it wasn't as big as I had would have thought. Just imagine having to pack all your worldly goods in this vehicle to ride across an undeveloped country to a fierce, new land.

In addition to the covered wagon, there's a reproduction of a stagecoach with an exhibit board that includes a video showing the process by which the man built it and some samples of the things he used. I love museums that have videos and I never fail to punch any available buttons. 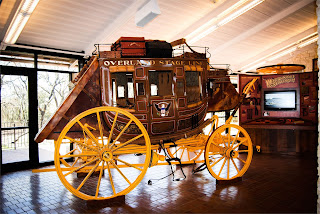 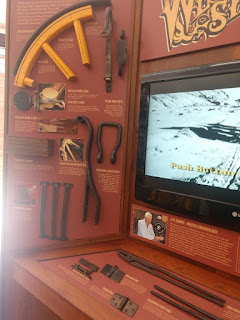 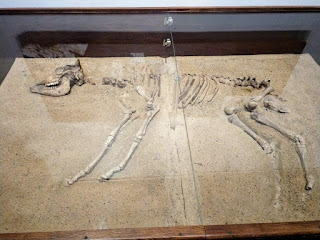 My favorite exhibit is Gracie, an almost complete 6,000 year old baby bison skeleton, unearthed when Weatherford residents were adding a water line for their cattle pen. Fortunately, they contacted experts at the University of North Texas who did a careful excavation. The archeologists also found some rudimentary tools and a fire pit. Seeing the actual skeleton was a heady experience for me as I am very interested in paleontology and archeology.

Museums with interactive displays have a special place in my heart. The Doss Heritage didn't disappoint with one room full of things for children with which to play and explore. Oh, and it's also open to those who are young at heart, like my friend Terri.

The Doss is a treasure for Weatherford, Parker County, and Texas and would be appreciated by anyone who loves western history. It has educational programs and revolving exhibits as well as the interesting regular exhibits I've highlighted. Since I've been, the museum has relocated five cabins that were located in various places in Parker County, so I'll have to go back. Admission is free, but donations are always appreciated (and needed!). If you're ever in the Weatherford area, stop by the museum and spend an enjoyable few hours reliving the history of the Old West. 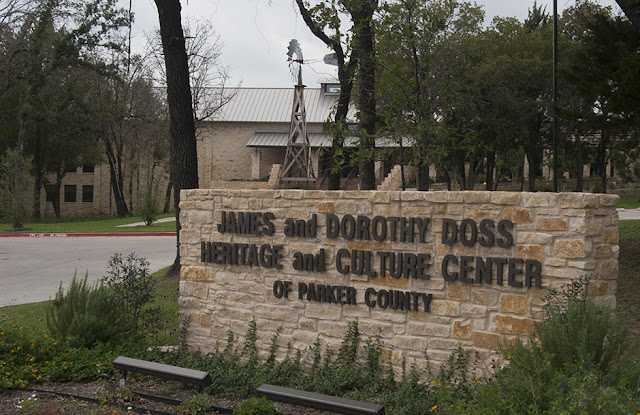