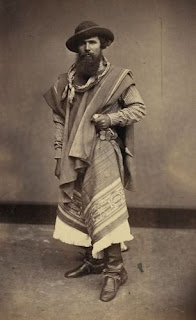 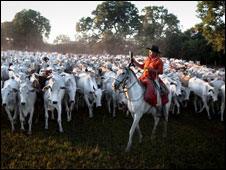 The American cowboy did not spring ready-made into the Wild West. He (and his ally, the American cowgirl) received influences from over the world.  My contribution today mentions the surprising chain of influences.  These came from deep within Colombia’s equatorial Amazon to the European Basque herders who came to California and Nevada.

Most shocking is the coca-raising tribe known as the 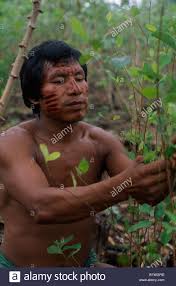 Piraparana, deep in the mountain-ringed jungles of the Amazon.  The Piraparana won’t allow for much knowledge of the outside world, but they gave their sons to the flow of strong South Americans who helped people the Wild West.

Basque men who left the mountains of Europe and bettered their lives in the Wild West became agents, recruiting others to to do same, specifically for working on ranches.  The Basques brought no skills that would aid them. Rather, their tenacious devotion to succeeding as herders, drovers and cowboys made them the most visible of groups.  The Basques came from secluded areas, and when they left for the North American West, most left home for the first time in their lives.  On the job, they learned skills they had to know perfectly in order to succeed in sheep-herding, like shearing and lambing.

Many contributed so deeply that they became valuable in several livestock operations.  One such person, Peter (originally Pedro) Barinaga became known as ‘Buckaroo Pete.’  Others worked on beef ranches and started hotels in California. 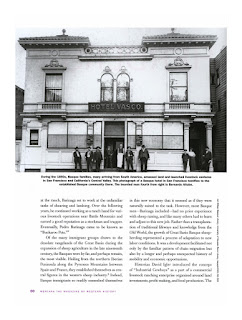 The first wave of Basque immigration to the Wild West began in 1850, and their descendents continue to prosper in California today.

Some say that the ‘Industrial Cowboy’ began during these waves of hiring and bringing employeees from afar. Men were hired to do specific livestock jobs in certain places such as ranches in the Great Basin of the US for men who concentrated on profit-making food production.  When more men were needed, they came across land and sea from faraway places like the northern Pyrenees to San Francisco.

Although the jobs were working with sheep, cattle and horses and demanded special skills,  the men were completely ignorant of these things until they arrived at the ranches. The hiring agents were similar to the Homestead agents of the 1860’s.  During the pioneering days, chain immigration of Germans and Swedish people was enhanced by homestead agents in the middle west of America.  The hiring agents for South Americans opened a new kind of mmigration for people who'd promise to work as herders, drovers and cowboys in the North American West.

Each country that contributed to this stream of people had their own type of cowboys, some obscure, some well known. There were the 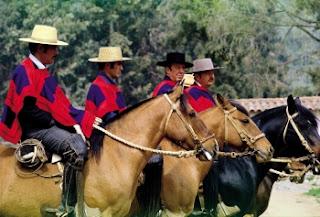 huasos Chileans, vaqueiros from northeastern Brazil, the pantaneiro also of Brazil, chalanes or qorilazos of Peru, the llaneros of Colombia and Venezuela and the the chagras of Ecuador. Thes were all cowboys, though there are many names for a group of men who share basic beliefs and characteristics.

Ecuador’s cowboys, the Chagras (kichwa or Chacras), were people who worked with cattle in the valleys and moors of the Andean high country.  Ecuador’s capitol, Quito, at 9-10,000 feet, lay in west central Ecuador in a high Andes valley; the Chagra capitol, Mejía,  lies in an Ecuadorian canton located southeast of Pichincha, a volcano in the same area of Ecuador.

Like the gauchos of Argentina, Uraguay, and  southern Brazil; Mexico’s charro; Chile’s huaso and the United States’cowboy,  the Chagra symbolized and enhanced a culture based upon men’s  skills with horses and their deep understanding of the land.   Ecuador’s Chagra understood the treeless high plateaus of Ecuador and astride their horses, they rode through the extreme cold and biting winds of Ecuador’s highlands, alone.

But the more sophisticated people of the government’s capitol, Quito, used the word ‘Chagra’ to mean a rustic, backward person.  This slur was pinned to the Chagra people because of the men’s complete simplicity.  The word also slandered where the group traditionally lived as being fit only for a sparse growing of corn.  The United States’ cowboy symbolized a similar romantic demand to be free to live as he chose.

Recently, a film maker worked eight months to learn about the different types of cowboys in South America.  He commented that, “The character of these men is forged through the terrain they walk on, the land they touch, the animals that exist there.”

Ecuador’s Chagras, or cowboys, wore the traditional cowboy clothing of a striped wool poncho, a sheepskin jacket, scarf, and felt hat.  Astride his horse, the Chagra is king of the Andean highlands, braving harsh weather with very little food.  Unfortunately, the word ‘chagra’ was a racial slur, too, because of the great Chagras’ heredity. They did not believe in the superiority of one race over another and married accordingly.   During Ecuador’s colonial period, the large estate holders spoke ill of the great Chagra, using their name!

Throughout South America,  the cowboys’ ethnicity varies according to the region.  For example, the Venezuelan cowboys, the llanerom, produced a darker strain of people because of the large number of slaves and runaways from plantations. Brazil developed two distinctive cowboy cultures. Vaqueiros worked in the sertão, the poor, dry, dusty backlands of the country’s northeastern area. This area's long droughts made the need for hardy cattle who could survive in the desert.  In early colonial days,  poor Portuguese immigrants worked as cowboys, building a multiethnic civilization throughout most of Brazil. By the eighteenth century, most vaqueiros were mestizos, Indians, or blacks.

However, class and race divided people on the frontier as much as other places in Brazil. The grim reality of cowboy life in the desolate northeast was far less heroic, just like in other cultures. Slaves did  many jobs that were simply part of raising cattle, tasks that were not part of the cowboys' job, so slave labor was used throughout South America.  Though countries like Venezuela finally elected to free all slaves, this simply didn’t happen until almost the 20th century.

South America both admired and criticized the great cowboys, most of whom were people of color.  During the rumblings of World War I, governments designed a popular gaucho (or cowboy) that would inspire people to be selfless, admire white skin and habits, and patriotically move the country further. However, the South American way of life, including the cowboys as they are,  is deeply entrenched in its own methods and beliefs that have little to do with what others want.