TALKING WITH THE DEAD - NEWSPAPERS

I recently came across the phrase 'talking with the dead'. Initially, I thought it sounded rather morbid until I thought about what it was really about. To me, it's connecting with the past in ways we might not think about. This also follows an earlier post about what inspires your stories. For those who would like to take a look at that post, here is the link: What Inspires Your Stories

The second post on inspiring stories: Talking with the Dead- Photographs

The third of what I include for inspiration is Cemeteries: Talking with the Dead - Cemeteries

My fourth post is about newspapers. I know most people use them to find out about certain people like the below piece from an 1882 edition of the Gunnison, Colorado newspaper.

However, there is also the 'editorial' which gives a writer an idea of what some people were thinking about the events around them. In the below piece the writer is voicing their opinion about what another writer has said. It is a response to an event that occurred in a town to the north of Gunnison. This gives a glimpse into what could bring people to the point of anger, protest if there were enough who could be inflamed by the words. This writer spells out what is perceived as an injustice. What wonderful, although scary information to use as you write about the conflicts. This writer is talking to us from the year 1882. A glimpse into human nature. 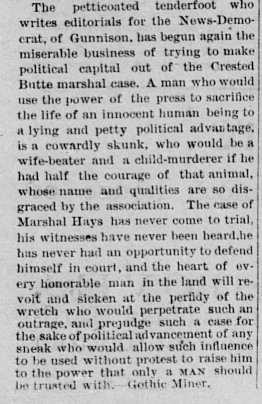 Finally, there are those pieces in the newspaper that allow us to glimpse what is important to the founding and growth of a town. The below piece is from an 1873 issue of the Colorado Springs newspaper, The Gazette. This writer is offering suggestions for a safe and fire-proof town. Fire is something many early settlements dealt with as they struggled to grow. In this case, the town of Colorado Springs was only two years old at the time of this article. 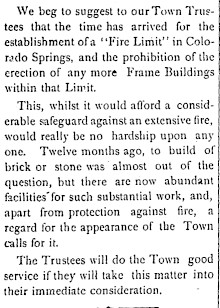 So the next time you decide to delve into the historic newspapers, remember there is more than just news to read and use for your inspirations. They are full of humor, news, and those blessed editorials, a glimpse into what people thought was important to their lives and those around them.

My short story in the recently released "Under Western Stars" by the Western Fictioneers is about a newspaperman. Below is a short excerpt from 'Gilbert Hopkins is Going to Die'.

Gilbert hurried through his day. He wanted to have a chance to speak with Zoe about what she might expect. He had to admit to himself that he’d become very fond of the young girl, almost as if she were his own child.

Hurrying down the street to the Widow Harkins place, Gilbert hoped he would be in time to join Zoe and the widow, who had taken her in, for the evening meal?

Knocking on the door Gilbert smoothed his hair after removing his hat. He was in the act of replacing it just as the door opened. Quickly removing it again, Gilbert smiled, “Good evening Mrs. Harkins, I've come to speak with Zoe if she's available."

Mrs. Harkins smiled, the edge of her gray eyes crinkling in her aged face as she replied, "Yes she is. She's been excited all day. I’ve had my hands full keeping her occupied," the lady smiled even wider, "and you are just in time for dinner."

Gilbert knew that he should dissemble but somehow that didn't fit his mood. "Now how did you know I'd not eaten?"

Mrs. Harkins laughed, "I know you young man, homemade bread, jam, and beef stew are a sure thing with you."

"You know me so well Mrs. Harkins, I never could pass up a slice of freshly baked bread, and you make the best."
"I swear Gilbert, your enthusiasm for my cooking makes me wonder if you ever get a decent meal," Mrs. Harkins said stepping aside to let Gilbert in.
Gilbert placed his hat on the hat rack, following Mrs. Harkins as she entered the kitchen. Zoe sat at the table her hair shining and wearing a new dress. If Gilbert had been so inclined, he would be jealous of this relative that was coming to take Zoe away. What started as a scary, tenuous journey had blossomed into a community’s love for the young orphan. Once they heard her story they were all eager to do what they could to make her stay in town as enjoyable as possible.