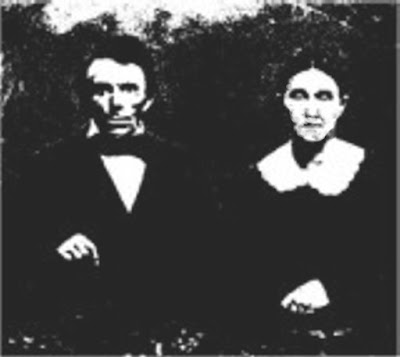 Historic photos from Ancestry.com
When we do research on an historic figure, we get the bare facts (which don't always agree). Rarely do we get the emotional stories behind those facts. I live on land that has one of those amazing stories that could fit into a romance-- or not. I know the bare facts, but what lies behind them? That is where imagination takes over.

This story begins with two brothers, John and Sebastian Ritner, born in 1804 and 1815 in Helvetia Confederacy, Switzerland. I've been curious as to why and what year they immigrated from there to the United States. Did Europe have a reason a younger and older brother would leave? How about their parents or other siblings? None of that shows up in records. Records from way back are not always tidy.

Whatever the case, it must have been in Pennsylvania where they met Sarah Jane Woodling, born in 1817, the daughter of Peter Woodling and Mary Houghner. When she was sixteen and he was twenty-nine, John and Sarah married in Easton, Pennsylvania. There is no information on when John and Sarah moved to Missouri, but they had four daughters there:  Missouri Ann born 1840; Mary Elizabeth born 1841; Julia Ann born 1848; and Flora born 1850.

Facts don't tell stories. Sarah and John were married 7 years before their first daughter was born. Were there miscarriages? Was it a marriage in name only for a while? What caused them to leave Pennsylvania for Missouri. Maybe Sarah had to nurse ailing parents, and it delayed things. With old historic records, they often have dates different or names spelled other ways.

After researching several sites (in the years before the Internet) I found some dates for Sebastian that make for more curiosity. One site said that he came to Oregon with cattle in 1845. Except, how does that fit with the claim he went to California in 1847 for gold (which he reportedly found)? Did he go off and leave the cattle or sell them out there-- if he even brought them? Then, there is how does it fit with his time in the military, which is among the facts. He was baptized in 1848 while serving with Company C, Fourth Regiment, Oregon volunteers in the Cayuse Indian War. Or how about that he was confirmed in 1845 as Private  Sebastian Ritner?  The second one fits better with his first communion being May 5, 1845 while serving in Captain Solomon Tetherow's company as a private.

He also is said to be the third foreigner naturalized in Polk County where he presumably took those cattle. In 1850 (some records claim 1848), he took up a Donation Land Claim in a valley and hills that he said reminded him of his homeland, presumably meaning Switzerland, which meant he didn't leave Europe as a baby. He liked this valley, it was claimed, as it was far from people and good for raising cattle.

Sebastian certainly fits the romance hero, having left his family to become an adventurer, Indian fighter, and miner before settling on his valley to build a cabin with what he'd made in the goldfields. When he wrote his brother to tell him what a wonderful land he had found, he would have been thirty-five and no sign of a woman in his life. When John wrote back that they would come, Sebastian headed back to the goldfields for more money. He left a pair of his pants on the floor of the cabin with a $50 gold piece in the pocket knowing only a woman would pick them up to wash them and find it (story told to me by one of the locals).

In response to Sebastian's letter, John left the farm he had built up in Missouri, with his wife and four daughters, the oldest being twelve, and headed out on the Oregon Trail. The story of what happened next varies depending on the source. It is agreed that their oxen were spooked by something. One source said Indians had been trying to steal stock. Whether it was that or an over rambunctious Fourth of July celebration, John stepped onto the wagon tongue to try and settle them. He lost his balance and fell beneath the wagon that ran over him. He died July 05, 1852 in On Horse Creek, east of Laramie where he was buried in an unmarked grave.

I don't know if Sarah was able to get word to Sebastian of the tragedy; or if she just had to go on with no idea he'd not even be at the homestead. Might she have gone back to Missouri? No idea, but she did go on, did find the money, and then Sebastian returned. As a widow, she was entitled to and filed for her own Donation Land Claim September 15, 1853, land adjoining Sebastian's.

History only records facts, oftentimes families don't remember details. It is romantic to think how a lonely man and woman might have realized they were in love. Is it possible that Sebastian had always loved his brother's wife since he was only two years older than her? John, as a mature man, would

have had the money and ability to provide for a life that an 18 year old would not have. Whatever the reason for the second marriage, October 20, 1854, Sarah married Sebastian and with the ensuing years bore him four children, John, Lewis, Sophronia and Frank. They built a cabin that straddled both land claims, built barns, cleared more of the land, raised horses, hay, and lived out their days. For a time, their home became the community church. Traveling ministers came through the valleys, preaching to those who would come. The Ritners helped build the first schools and churches, making what had been a wilderness into a community. 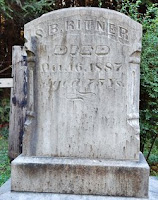 On a hill high above the creek, they and many of their descendants, their names engraved on granite tombstones, are buried in a small, well-kept, family cemetery. For over a hundred years, the land of Ritner Creek Ranch remained in the hands of Sebastian and Sarah's descendants.

Of the physical things they built here, only the harness shed remains today. The stories though, the ford on the creek, the logging chains across it, they were there when we arrived-- the ones from outside the family who bought it from the widow of a descendant of Missouri. Our buying it is a story all on its own for how that came to be-- pure serendipity. There were and still are two wagon wheels from the wagon that probably brought Sarah to Oregon. Physical things though never remain forever. The stories can if someone saves them. I wanted to save this one, as since 1977, I have lived on the land they settled where they created a life for themselves. I hope my family can hold onto it as long as theirs did. Only time will tell on that, but our son wants to hold onto it as a start.

There are ironies in this, as when I was a girl, I wrote a story about the Oregon Trail, which finally came out when I became an indie writer. In my story, there was an accident with a run away team of mules and the hero was badly injured. In romances, heroes don't get killed. Real life isn't always so kind, but then is the real romance a man who always loved a woman he couldn't have? I wrote one of those too-- based in a different part of Oregon.

As you can see from the research, romances can't always get all the details. That's where writers take over and merge what they know with what they surmise :)

My story of the Oregon Trail: Round the Bend at Amazon
It is also wide at Barnes and Noble, Kobo, etc.