ALICE RAMSEY, THE FIRST WOMAN TO DRIVE ACROSS AMERICA!

My latest book, Winds of Change, was so much fun to research and write because 1903 was the beginning of a new era for the automobile. The automobile had been a toy and a luxury for the wealthy before this time, but because of Horatio Nelson Jackson’s successful road trip from San Francisco to New York City in 63 days, more and more people set out to beat his record and show that automobiles could be driven in the west.
One of them was Alice Ramsey.
Alice, a young mother of 21, didn’t set out to be the first woman to drive across America. It all started when she was nearly thrown from a cart one day when the loud noise of an automobile caused her horse to bolt. Her husband, who was 24 years older than her, immediately went out and bought her a Maxwell Runabout, thinking that if she was driving an automobile, she would be safer than in a cart with a horse. What he didn’t expect was that she would become passionate about the automobile, even entering a dangerous race where the automobiles had to be driven around curves and hug a cliff above the ocean.

After finishing the race, Alice was approached by a man who represented the Maxwell Company, her car’s manufacturer. After watching her driving skills, he had the idea that she could handle the difficult roads or lack of roads out in the west and could be the first woman to drive an automobile across the country. The Maxwell Company would provide her with a brand new automobile, plus all the provisions, and send a pilot car ahead into the western states to help map out her journey.
The only way Alice’s husband would agree to let her take on this cross-country road trip was if his two sisters, Nettie who was 47 and Maggie who was 44 went along for the ride. Alice invited her friend, Hermine Jahns who was 16 years old to join them, and started preparing for the journey.

On June 9, 1909 the four ladies packed a 30-horsepower Maxwell automobile and set out to drive from New York City to San Francisco. They wore billowing rubber ponchos to keep their clothes clean from all the dust and dry from the many rain storms they were sure to encounter. They hoped to accomplish their goal in less than 40 days.
There were a lot of people who didn’t like automobiles at this time, and a lot of other people who didn’t think a woman should be driving one, so not everyone was friendly on their trip. The New York Times referred to Alice as “A Freak.” A farmer doubled his fee to tow them out of a mud hole with his horse. Other people called out insults to them. One man went so far as to paint his building green to cause trouble for the travelers because the guide book Maxwell furnished said to turn left at a certain yellow building. This misdirection didn’t stop Alice for long. There were no good surveyed maps or road signs at this time.

Alice and her three traveling companions were proper ladies and didn’t appreciate these rude behaviors by people who were against their journey. After an overnight stop in Chicago, Alice’s  sisters-in-law appeared the next day in fancy clothes and huge fancy hats, hoping their appearance would earn them more respect.
Rain accompanied them on much of their journey out west. Their automobile tires were outfitted with chains to see them through the mud, but the chains only worked when the mud wasn’t too deep. Of course the clanking of the chains and the pop, pop, popping of the engine meant that the ride was a noisy one. Mud slowed them down many times, especially on the poor roads out west, but dealing with miles of mud holes couldn’t stop them. Alice changed 11 flat tires on the trip and made many repairs to the Maxwell herself. She wouldn’t let anyone change the automobile tires for her, showing that she was truly in charge of her automobile. She also wouldn’t let anyone else “crank” the car to start it.

Gasoline wasn’t easy to find the further west they went, and the best place to find it was a the local mercantile. The only way Alice could check the fuel level of her Maxwell was to get out of the automobile and remove her seat cushion where there was access to the tank. There was a wooden measuring stick to use for guessing how much fuel was left.
The ladies got stopped by the sheriff in Nebraska and had to show that they did not carry any guns. They had crossed the trail of a manhunt for a killer in the area. In Wyoming, they ended up with a case of bedbugs from a local hotel. In Nevada they were chased by a Native American hunting party with their bows and arrows drawn. The travelers were delighted to discover that the Native Americans were actually chasing a rabbit, not them.

After many more trials, Alice and her companions arrived in San Francisco on August 7, 1909. The journey had taken 59 days, not the 40 that they had hoped for. Alice had driven the Maxwell the whole way by herself.
Unfortunately, Alice realized at the end of the journey that the whole thing had been a publicity effort by the Maxwell Company, and all the press reports going back east had been about the automobile and not about her and her companions. Alice finally received the recognition she deserved when she was named “Woman Motorist of the Century” by AAA in 1960. She wrote a book about her journey in 1961 while living in West Covina, California, entitled Veil, Duster, and Tire Iron. Later in 2000, after her death, she was inducted into the Automotive Hall of Fame, the first woman to receive that honor.
Alice drove clear across the United States 30 more times over the next 70 years. She lived to be 96 years old and is considered a vehicular pioneer.
~~~~~~~~~~~~~~~~~~~~~~~~ 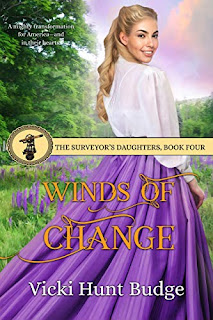 When Cora Gardner reads about a wealthy doctor who’s attempting to drive an automobile from San Francisco to New York City via southern Idaho, she makes a fifty-cent bet that he’ll succeed. But there are only 150 miles of paved roads in the country, and none in Idaho, so her chances of winning are slim. Her enthusiasm for the cross-country road race excites all the young people in town who are fascinated with the idea of horseless carriages. All the young people, that is, except for that stubborn Gideon Lewis.Gideon Lewis learned to build wagons and wheels from his father, a master craftsman in his trade. He’s positive the automobile is simply a passing fancy for the wealthy, and that the doctor who’s attempting to drive across the country will bog down in Nevada’s sand like his predecessor. Gideon accepts Cora’s bet, however, and humors her in the attempt to win her hand.Will the biggest event of 1903 in southern Idaho enable Cora and Gideon to stop arguing about the future of the automobile? Is the beginning of a new era in America also the beginning of a new era for Cora and Gideon?Winds of Change is a fictional story based on an exciting true adventure. It’s a story of love and friendship and the ability to dream anew.Authors Promise: This is a clean and wholesome historical western romance with no cliffhangers.