The Texas Woman Who Saved the Bison by Bea Tifton 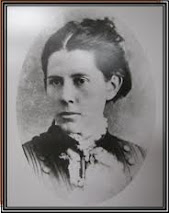 Charles Goodnight is a Texas legend. He co-established the Goodnight-Loving Trail and was the inspiration for Larry McMurtry’s epic book, Lonesome Dove. But did you know his wife also made historic contributions to Texas and all of North America?

Mary Ann “Molly” Dyer was born on September 12, 1839, in Madison County, Tennessee. She and her family moved to Texas when she was fourteen. Soon after, her parents passed away and Molly was the caretaker for her five brothers.

Molly became a schoolteacher and taught in Weatherford, Texas in the 1860s.  In 1864, she met Charles Goodnight. They married in 1870.

Charles Goodnight went into partnership with Jon Adair and together they founded the J.A. Ranch in Palo Duro, Canyon, Texas. Molly ran the household. She became a mother figure to the cowboys who worked for her husband. As she adjusted to the loneliness of a frontier wife, a cowboy gave Molly three chickens. Instead of consigning the fowl to Sunday dinner, Molly made pets of them. 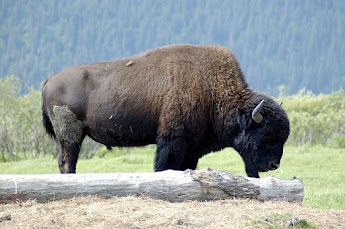 The Native Americans hunted bison, also called American buffalo, and when they killed the animal, the people used all of the parts. When White settlers arrived, there were between 30 and 60 million bison roaming the United States. The Whites began slaughtering the animals, taking the pelts and leaving the carcasses to rot. By the 1860s, only about 300 bison were left in the United States.

One day Molly and Charles found two orphaned calves. Molly convinced Charles to keep them and care for them. The couple added any bison orphans they found and bred the animals until soon, they had a herd of about 200. 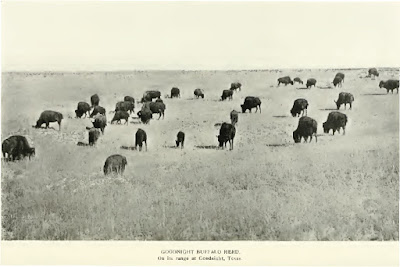 Molly heard that conservation efforts were underway in various parts of the United States and she and Charles donated and sold part of their herd.  Some went to Yellowstone National Park, the New York Zoo, and Buffalo Bill’s Wild West Show. 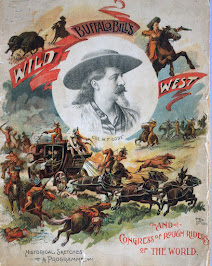 Molly died in 1926 and Charles died three years after. In 1996, the herd, one of the last pure bison herds in the United States, was donated to the Texas Parks and Wildlife Division. Many of the buffalo roam in the Caprock Canyon State Park near Lubbock, Texas. They range in 15,000 acres to live unmolested.  San Angelo State Park in San Angelo, Texas, also has a small bison herd, as does the Wichita Mountains Wildlife Refuge in Oklahoma. About 5,000 bison exist in North America today.

At the Charles and Mary Ann Goodnight Ranch Historic Site in Goodnight, Texas, a statue of Molly with a bison calf reminds visitors what she did to save the American Buffalo. 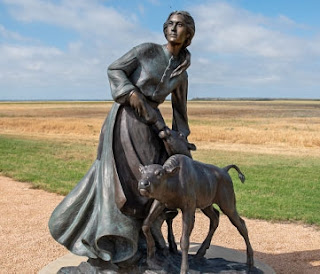 Further reading and a bison video: