Hodgepodge of Author's Notes from My Book, Cole by Zina Abbott 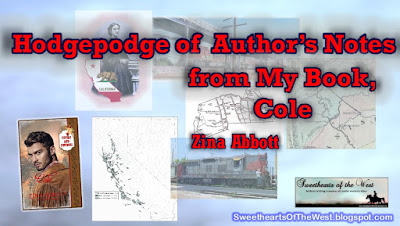 I recently completed Cole, part of the Cupids & Cowboys series. The following are taken from the Author’s Notes in the back of the book:

One exception to C.P.R.R. involvement was the Santa Fe Railroad that built a line in the San Joaquin Valley. Although that company has changed names several times and is currently known as the Burlington Northern & Santa Fe Railway, the Santa Fe tracks pass within a mile of my house.

Unfortunately, Leland Stanford, et al, got into a snit with Stockton and basically went to war against the city. Instead of having Stockton as one of its major stations on the San Joaquin Valley Railroad, the company created the town of Lathrop, named after Stanford’s brother-in-law, to serve that role. The location was originally known as Wilson’s Station. This line, the San Joaquin Valley Railroad line, started at Lathrop, which connected to the Western Pacific line. The first Western Pacific Railroad company failed and was absorbed by the Central Pacific Railroad in 1870. For twelve years, every effort was made to bypass Stockton by transporting travelers and shipping freight to San Francisco first before it would be taken to or from Stockton. Stockton was not printed on the railroad maps of the time.

Eventually, the connection was made with Stockton, and the San Joaquin Valley Railroad became part of the Southern Pacific Railroad. Its tracks are about three miles from my home. As a rural letter carrier, I used to deliver mail along S.P. Avenue built next to the tracks. 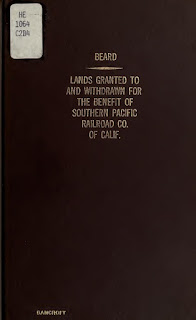 One of the financial difficulties railroads ran into throughout California was that so much of the land was tied up in Mexican land grants. Largely due to the support the United States received during the 1846-48 war with Mexico from many of the Californios—those Mexican citizens who lived in Alta California—the United States recognized ownership of land originally granted by the Mexican government. Although proving such land claims was not always easy and is a different topic for a different discussion, one of the repercussions for railroads was that said land was not considered federal territory. [I found it difficult to find public domain maps of Mexican land grants, but you might get some ideas of where they were located and how they might have affected the building the railroad by CLICKING HERE and by CLICKING HERE.]

[This book by Attorney Henry Beard is titled The lands granted to and withdrawn for the benefit of the Southern Pacific Railroad Company of California, and was published in 1877. It is in the public domain.]

[Mexican grant land] did not qualify as land that railroads would be granted to be sold for profit. Since the sale of land along qualifying rail line right-of-ways was how many railroads made their profit, many railroads that built in California ran into financial difficulty. That is one of the reasons behind the failure of the first Western Pacific Railroad that built mostly along the coast. Most of the land was Mexican land grant land, and had to be purchased.

It was also due to the number of Mexican Land Grants in California that there was not a lot of land available for homesteading, particularly on the coast or in the central valley (Sacramento Valley and San Joaquin Valley). 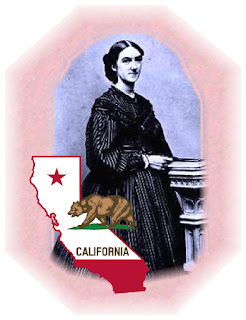 Regarding land ownership and women, California is one of the few community property states in the United States. The ability of women to own land was established in the first state constitution in 1850. Married women were allowed to own land separate from their husbands. Land owned by women before their marriage remained their sole property and could not be claimed by a husband after marriage. Likewise, land owned by men prior to marriage remained their sole property.

Land and other assets gained by the couple after marriage was community property to which the wife had a claim. For most of the 1800s, women could inherit up to one-half of the estate of her deceased husband, but she could not will or devise her half away from her husband. Upon her death, one hundred percent of the estate was inherited by the husband.

Several years ago, under my real name, I put together a presentation on California laws and how they affected women. My synopsis for that is still available on my Robyn Echols website HERE.

Cole, book 8 in the Cupids & Cowboys series is currently on preorder and will be released April 1st. Please CLICK HERE to find the book description and purchase link,