ANYONE WITH A BANK OF ITALY CREDIT CARD? by Marisa Masterson

Disasters create opportunity. That is the unfortunate truth--or fortunate if you are the entrepreneur cashing in on the catastrophe. 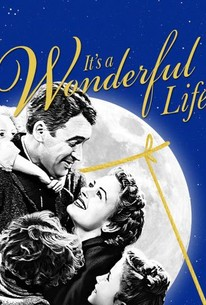 At the same time, the entrepreneur from this tragedy has often been compared to a hero from one of my favorite movies. He's known as the real George Bailey. Remember that character from It's a Wonderful Life?

Some of you may have a credit card backed by a bank this real life "Building and Loan" man founded. Read on to discover which bank and how a San Francisco tragedy went on to launch make this bank a worldwide success, easily recognizable by most people in the United States.

April 18, 1906. The day started out rocky for people in and around San Francisco. Literally. A terrible earthquake had its epicenter in that city. Buildings shook and sometimes crumbled.

One woman determined to make the best of it and started her stove to make breakfast for her family not realizing that the quake destroyed her chimney. The fire quickly engulfed her home and spread throughout the city. 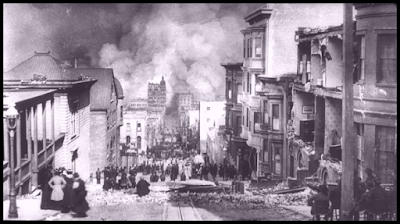 People's lives burned before them. To keep the city going and allow for rebuilding, bankers would need to loan out money. Quickly.
The problem lay with the safes used by the banks. These remained hot for weeks. No one could open them because oxygen rushing in would cause the cash and paper records to catch fire. 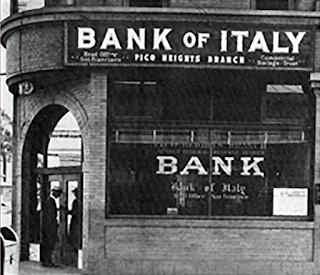 One small bank was different. The Bank of Italy was a small business with smart owner.  Amadeo Giannini loaded $80,00 of coins in his wagon and escaped from the town with them hidden under crates filled with oranges. Coins he collected in the weeks and months before the quake when he convinced immigrants that their few coins were safer in his vault rather than stuffed in their mattresses.
He returned after the fire was contained and set up a temporary bank on the shore of a North Beach wharf. There he lent out money with only a handshake.
After helping workers rebuild their homes by way of these loans, he expanded by walking the fields of  California's valleys where he convinced farmers to keep their money in his bank. 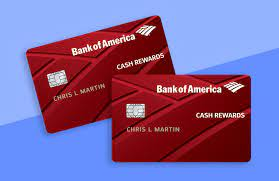 Because of his focus on hardworking immigrants and the common man, Giannini went on to found the Bank of America.
So, anyone have that bankcard in his or her wallet?
A #1 NEW RELEASE IN CHRISTIAN HISTORICAL FICTION ON AMAZON--
Posted by Sheila M at 3/24/2021