I’ve mentioned several times before that I grew up in the beautiful Gila Valley (pronounced “hee-luh”) in southeastern Arizona. This valley sits between several mountain peaks, the most prominent and beloved being Mt. Graham. Standing at 11,000 feet above sea level, it is the place where our family reunions for my father’s side took place every summer, in a sweet campground called Soldier’s Creek. The campground itself had lots of big rocks to climb on and a small ravine that was safe to climb down into. You could even play in the creek below (if you were brave enough to get into the freezing cold water) or hike through the trees and enjoy the fresh mountain air with the scent of pine. Some families slept in tents while other stayed in cabins that were an easy walk of a mile away. The cabins had rows of beds for the cousins to sleep on. It was so much fun to stay up late and play cards or tell ghost stories around the campfire. The ravine at Soldier’s Creek is one that I mentioned in my book, On the Wings of Hope, when schoolteacher Ariana Stover loses her footing and goes rolling down the hillside toward the water below. If that were the real ravine, she wouldn’t have rolled far. There would have been too many fallen trees and protruding rocks in the way, along with a sharp drop if her point of entrance had been in the middle of the campground rather than on the left or right side of the campground. As for the actual event of Ariana losing her footing and rolling, that may or may not have happened to me on a hillside in North Carolina many years ago. My family still has it recorded somewhere on video tape. *cringe*

You might think that with my love of family and my love of stories and my love of history, I would be able to share all kinds of fabulous stories about my own family history with you. Admittedly, there are some pretty great stories out there about my ancestors, and though I’ve heard them a hundred times, for whatever reason, I cannot for the life of me ever remember the details. Therefore, I never mention them at all. Such a shame, really.

Here are a few things I know about my paternal grandparents:

My grandmother was 16 years old when she married my grandfather, who was 10 years older. The year was 1914. Grandma’s sister made her wedding dress and a traveling dress for her. Grandma had a true wit about her, and she enjoyed doing genealogy and teaching the children at church. As for Grandpa, I didn’t know him personally as he died before I was born. But in his heyday, he was a terrific baseball player with his chosen position being catcher. It was said of him that no one could steal second base on him. At one point, he was offered a contract to play professional ball (which team, I can’t remember, my brother thinks it was the Brooklyn Dodgers—I’m currently asking my cousins, and as soon as I receive the answer, I’ll update this post) but was strongly encouraged by his parents (who were very religious) to turn it down because he would have to play on Sundays. Choosing to honor his parents, he did as they asked and instead worked a dairy farm. They eventually had 13 children, most of whom lived to adulthood, and 83 grandchildren. Two of those children were my dad and his twin sister. Born at the tail end of the Great Depression, the doctor who delivered the babies felt they would be too big of a burden on an already struggling family and offered to raise them as his own. I’m very grateful that my grandparents turned him down!

Grandpa’s grandmother and grandfather came to America in 1859. While living in Sweden, he became an expert cabinet maker, working in the King’s court for seven years. They crossed the ocean and rode the rails until they got to Nebraska. Once there, they prepared to cross the plains. It was an arduous journey, and at one point their little family was quite hungry with rations being reduced and fatigued. They stopped at a river and my great-great-grandfather went fishing. Intent on gathering buffalo chips, my great-great-grandmother gazed out toward the horizon and saw a tree. Feeling the need to check it out, she did so and found “a pile of dry bread,” according to a family journal. She was so overcome by the miracle that she wept.

This is a picture of a museum in my hometown which used to be a bank. It showcases several artifacts from the early settlers of the Gila Valley, including some from Native Americans, particularly of the Apache Tribe. My great-great-grandfather’s Swedish Bible which he brought with him is there inside a glass container. I remember seeing it for the first time a few years ago. I wish I had taken a picture of it. The second picture you see is the storefront of an apothecary. Next to it is the old movie theatre where my dad and his brothers and sisters used to go every Saturday night. They worked in the cotton fields during the week and then treated themselves this way. Today these two buildings are part of the museum. 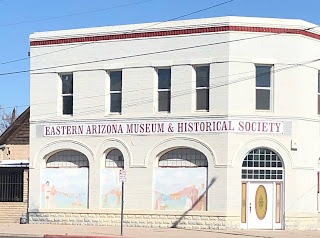 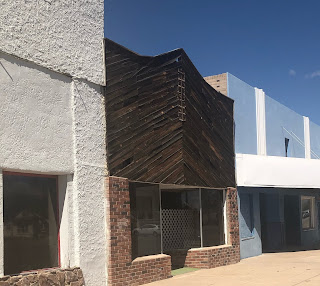 My paternal grandmother had some interesting people in her family tree as well. Her maternal great-grandparents moved from Kentucky to Illinois, and then Utah, narrowly missing the conflict of the Civil War in that area. In that time, they suffered many maladies, one of them being that their toddler son was swept away in a river never to be found. Another time, her great-grandfather was shot in the shoulder where the bullet lodged itself deeply into his flesh and stayed there until his death many years later. Despite these difficulties, they remained optimistic and were looked upon as spiritual leaders in their congregation. From family journals, we know that he “was a real pioneer always helping found new towns, making reservoirs, clearing new land, and encouraging people to build and build well. He was always on the frontier. He was a colorful figure in the early days of southern Utah. He was often referred to as the ‘Grand Old Man.’”

My mother’s side of the family is rich with tales of adventure as well, but that’s a blog post for another time. I may at some point include some of these stories in my own fictional ones. Who knows? One thing I do know is that I don’t have to go very far to look for inspiration. These people were the real deal, and if I can be half of what they became, I’ll be doing well. If you'd like to check out the scene I mentioned of Ariana tumbling down a hill, here's where you can download the book: https://amzn.to/3b3iWbq 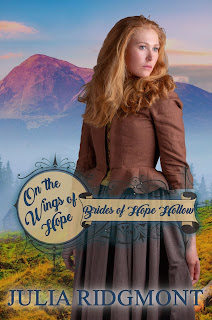