My interest in Laura Ingalls Wilder's works began with book #8 in the Little House series, These Happy Golden Years, with Mrs. Wilder's careful description of the kitchen in the 'little house' her betrothed, Almonzo, had built for her. 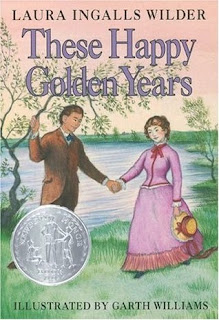 In The First Four Years, the kitchen was  arranged differently, but still carefully described.  I'd found that books #8, #9 and the novel published after her death, On the Way Home, wove satisfying descriptions of everyday life in the 19th century Middle West.

Their first home lay on their Tree Claim, a type of homestead granted for developing a forest,  with slightly different homestead rules. But this was a beautiful spot for a log cabin, or a small house.  Laura said she used to day-dream about when the trees would be fully grown, and their little home would rest among them in the shade they provided.

Their first year passed so peacefully!   The following years had hardships, like their both coming down with diphtheria. (One of Almonzo's bachelor relatives came to care for them and Rose went to her grandparents' home.)

The First Four Years is broken into four chapters, including a chapter for each of the three years of their early married life.  Before they married, Laura said she'd try farming out for three years, to learn if the crops would come in well enough to support them decently. If not, Almonzo promised to try some other profession.

Mrs. Wilder described herself, in The First Four Years, as a 'pioneer girl' and not a farmer's daughter. (Her folks had taken her from place to place, before the West became too crowded.)

The house where Laura Ingalls was born

Shortly after she and Almonzo were married, the harvest began, and she cooked the mid-day meal for the crew of threshers for several days. (One of my sisters was a farmer's wife and cooked for the crew during harvest.  It sounded exhausting!) Laura tells about going into the yard to pick pie plant, then valiantly making pies and cooking the huge meal.

The First Four Years also describes the increasingly hard years that they'd cheerfully lived through, together.  On the anniversary each year of their starting to farm,  they'd discuss if things were going well, or not. The first year was seen as a beginning, nothing more.  Breaking the sod, sowing the seeds, getting livestock and some equipment.

The second year had been hard and not very profitable, but they decided to keep trying The third year was close to a disaster, and then they stopped noticing the anniversary dates.

They couldn't avoid seeing that things were just too hard for people of their income. They started to consider leaving.   Like many other farmers, they'd gone in debt in order to have the latest farm equipment; Almonzo had felt that good equipment was an investment in their future.

But the weather didn't cooperate with their future.  Hailstorms, then dry hard winds destroyed crop after crop.

Finally they discussed their situation. Almonzo stated flatly that they were 'trapped.'  Again, they braved bad weather and hoped for a turn of luck.

The years after that proved only that it was impossible for poor people to rely on the weather in the Great Plains. For example, hailstorms wiped out a beautiful, huge wheat crop that was already being harvested.

After the hail, it was worthless, even as hay.  This happened once more, then for the next few crops, dry, hot winds 'baked' the wheat and oats, making them fit only for hay, and short crops of hay, at that.

Finally they discussed how they were reaching the end of their resources. They continued, but eventually they were forced to give up, when they couldn't pay taxes or interest on the loans.   When the bank couldn't extend their loans any longer, they lost their claims, moved into town, then left.  (The bank, then, went out of business.)

By 1894, the year they left, the frequent natural disasters and tight credit forced thousands of homesteaders off their land. They were simply two people among the thousands in the US who suffered during the economic depression of 1893. Millions of people throughout the world were unemployed and starving.

The Wilder family's 650 mile journey in their covered wagon from De Smet, South Dakota to Missouri is described in On the Way Home.  As they were in her earlier books, these descriptions are engrossing.  Until the final book, she'd discussed the beauties of the plains in all seasons, from blankets of violets through deep dangerous snow storms.  She told of the beauties and the fascination that even prairie fires and cyclones held.

The final descriptions are different. They examine the outside world from a covered wagon.  Also, Laura wasn't the proud owner of her own home, but a woman escaping with what she and her family could save from the wreck of their world. 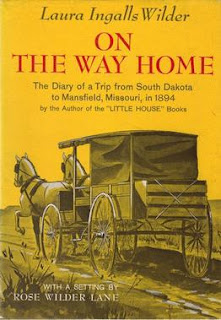 Their daughter, Rose, gives thrilling accounts of the turbulent years surrounding the time when her parents were forced from their land.

Pages 1-3 of On the Way Home describe Coxey's Army: a group that 'rampaged' from town to town, demanding food.  Rose tells, through a child's eyes, how her grandpa said 'this panic <1893> is no different from the rest.' They were safe in their beds, their stomachs filled. Only where Coxey's Army fell upon people was there any unrest.

Rose described how starting in California, Coxey's Army stole railroad cars, 'drove them at full throttle' into towns and demanded "Justice for the working man!"  Eventually the army was joined by other groups and they made the first protest in Washington, D.C.

Non-fiction sources make the depression of 1893 dry and boring, and even Coxey's Army becomes just a ’failed protest' and nothing more.

But On the Way Home turns the 1893 era into thrilling, life-threatening events (which they were). Rose stated flatly, 'this wasn't a depression.  Nobody had heard of a depression. But everybody knew about panics. There'd been plenty of those...' A precocious child, she rattled off the dates of the panics, since the nation had first been industrialized.

She was being sarcastic, but she was correct.  For the 'panic' of 1893 did terrible things across the country. The bad weather and failed crops hadn't hit just Laura and Almonzo, but farmers across the nation.  The Panic of 1893 started due to the crop failures in Washington state, and then banks failed across the nation.

Books 8 and 9, then On the Way Home are optimistic like the Little House books.  But the author had to be more candid than earlier.

On the way Home gives an excellent account of driving through the 'roads filled with beggars'. The roads were 'churned into dust' by wagons and covered wagons.  Laura mentions how many wagons, and where the people came from, several times for each day of the trip.

Most of them were eager to talk, and most were the families of failed farmers. Many were going to or leaving Missouri or simply trying out other places.  They seemed to be going everywhere, trying once more to safely settle down and farm.

Mrs. Wilder left this book for eight years before she considered it for publication.  She was unable to revise it.   After she passed on, the editor and her family decided that publishing it as she'd left it was best.