EVER HEARD OF SPRING?

Have you ever heard of Spring? I can hear you now, "Of course, everyone's heard about spring, it ended like two days ago."
The Spring I'm speaking about is Spring Byington. Perhaps most of you may know of her from the time she spent on the television series 'Laramie'. She worked on stage, screen, and television and was fairly successful in all. The reason I became fascinated, other than I have an affinity for performers, having been one myself, is where she was born and what she did before she became 'famous'.

Spring Dale Byington was born on October 17, 1886, in Colorado Springs, Colorado to Professor Edwin Lee Byington and Helen Maude (Cleghorn) Byington. Her father was the superintendent of the public schools and principal of the high school in Colorado Springs from 1884-1889. The family left and after Mr. Byington died in 1891, Mrs. Byington placed Spring with her grandparents and attended medical school. After graduation, Mrs. Dr. Byington went to Montrose, Colorado to practice medicine there.

In the 1900 census, Mrs. Dr. Byington was living in Denver, Colorado with Spring and her other daughter Helen at 3626 W 32nd Ave. as boarders.

By 1907, Spring was pursuing her career with a troupe that traveled through some of the mining towns in Colorado. According to the Montrose Enterprise of January 11, 1907: 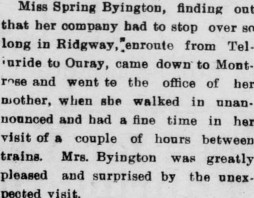 Unfortunately, Helen Byington died on April 12, 1907, a few short months after Spring had visited her.

Spring left New York and her work as a stage actor and went on to become a contract player for MGM. From there she appeared in a number of films and had her own television show 'December Bride' that began a five-year run in 1954.

Spring Byington died on September 7, 1971, in Los Angeles, California of cancer. For those who may be interested, here is the IMdB biography: https://www.imdb.com/name/nm0001981/bio?ref_=nm_ov_bio_sm