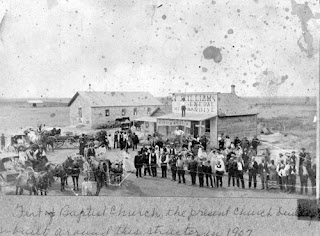 The Terrible History of African American Pioneers in the Northwestern Territories

When the Northwest territories were opened in 1830 to everyone, regardless of color, education or religion, black settlers were promised, by law, the right to own land, to own firearms and  to vote. The first African American man to hold elected office in the United States was John Langston. In 1855 Mr. Langston was voted town clerk by a community of white and black citizens in Ohio.

Another startling development occurred in a Randolph County, Indiana preparatory school. The student body was co-educational and racially diverse. The board of education was the same, and president was black.

A historian of African American pioneers, Anna-Lisa Cox, found that the Northwest Territory frontier had been home to numerous free black communities, with churches and schools that welcomed everyone, since before the civil war. But the Northwest Territory frontier was not completely free of racism.  Individual townsmen continued to enslave people, even though it was illegal.  One such enslaved woman, Polly Strong, took the slave owner to court in 1820 and won.

Unfortunately, African Americans in the Northwest Territories met with a violent backlash because of their numerous achievements.  Editors of town newspapers, both black and white, were dragged from their offices, tarred, feathered and beaten, their printing presses broken; farmers and their families were forced, at gunpoint, to relinquish their property;  a mill owner was likewise threatened until he gave up his mill and left. The scourge began in the 1830’s and ended after the civil war. African American voting rights were rescinded; ‘Black Laws’ were put into effect; and in 1857 black men were no longer citizens.

In Ms. Cox’s words, the younger generation of Northwest Territory began to speak of people who belonged and those who did not, as if these were the core values of the American Revolution. Clearly, to them, African Americans did not belong.

During this checkered time, the gag rule began (in the 1830s) in Washington. Any petition that discussed ending slavery was stopped by the federal government. Also in the 1830’s Abraham Lincoln’s first published speech concerned the rising violence against African Americans. 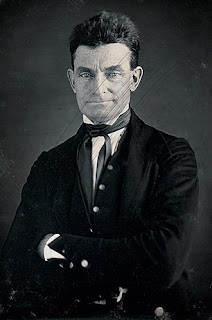 The only difficulty with resettling in ‘Bleeding Kansas’ was the hostility toward free and  formerly enslaved Afro Americans coming from two rather violent groups.  Abolitionists, such as John Brown in 1854, fought the ‘Free Soilers’ (who wanted no African Americans in their territory at all) and the ‘Pro-Slavers.’ 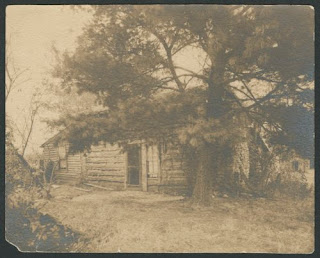 This deterrent to African American settlers ended, first in 1861, when Kansas entered the Union as a Free state, then on January 1, 1863 with the Emancipation Proclamation.
After reconstruction, African Americans in the South suffered under laws that reduced or removed their civil rights. Coming out West was the best solution. They left the South after 1877, when the gains they’d found during Reconstruction were reversed, and the lands they’d owned were taken away from them.  In order to survive, many of these people became sharecroppers on land their families had worked as slaves.

Agencies in Kansas sought black families to settle in western Kansas, and by mid-1877, 300 African Americans had formed a new town, Nicodemus. In 1879, a homestead agency (owned by Benjamin "Pap" Singleton in Tennessee) recruited black people to travel to Texas. (Just as homestead agencies recruited other groups to settle in the West.) By 1800, 9,500 African Americans had moved to Kansas from Texas, Mississippi, and Louisiana. 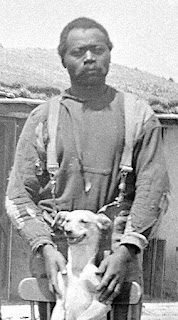 The Homestead Act of 1862, signed by President Abraham Lincoln, granted 160 acres of public land to male citizens over 21, veterans of all ages, widows and unmarried women, women heads of households, and immigrants who certified they’d become citizens. The Civil Rights Act of 1866 affirmed African Americans as citizens, and they were eligible for homesteading under the Homestead Act of 1862.  Also, the Fourteenth Amendment guaranteed black people’s rights to homestead in 30 states (according to a study shared by the National Parks Service and the Nebraska University’s Center for Great Plains Studies).  There were numerous other forms of the Homestead Act in Nebraska.

African American settlers first moved into Kansas, then into the other plains states.  Known as ‘Exodusters,’ a small group moved in Lincoln in mid-1879. More settlers followed, getting land grants through the Kinkaid Act in the twentieth century, dotting the plains with their sod houses.

When Nebraska was known to be a safe place for African American settlers, more black people moved to Omaha and Nebraska City. In 1870, Robert Anderson, a former slave, became the first black to homestead in Nebraska. His first claim was in eastern Nebraska and consisted of eighty acres.

Unfortunately, grasshoppers and drought forced him to give up his land and work in Kansas as a farm laborer.  Undaunted, he returned to Nebraska, this time in the western part of the state, to get a land grant via the Timber Culture Act.  By 1918, this former Kentucky slave and US Army infantryman owned over 2,000 acres of land.

Buffalo Soldiers, highly respected African American military men, also settled in Nebraska and nearby states. These members of United States military services assigned to the plains and nearby areas  were given the name ‘Buffalo Soldiers’ by Native Americans, for their coloring and hair texture. The Buffalo Soldiers were said to have accepted this name as respectful.

Afro American cowboys were also important settlers to the Great Plains.  They took on the roughest jobs on the trail runs (those of wrangler) and their other skills included cook and cowboy. There were approximately 9,000 Afro Americans riding the cattle trails. 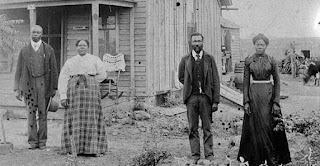 Photo NoteThe cabin belonged to John Brown’s brother-in-law. It was the site of the "Battle of Osawatomie" where John Brown and thirty free-state defenders fought in 1856 against 250 pro-slavery militia. The Nebraska settler is Jim Shores, Custer County Afro American homesteader, 1877. The four people in the final photo are 'Exodusters.' They moved from Tennessee to Kansas. The opening photo is of the first African American settlement in Nicodemus, Kansas,  The portrait in the Kansas section is John Brown, abolitionist (May 9, 1800 – December 2, 1859)
Posted by HAYDN at 6/08/2020