Nate’s Destiny, book six in the MacLarens of Boundary Mountain historical western romance series, focuses on my protagonist, Nate Hollis. He fought as a Union Cavalry officer, losing part of his arm at Battle of Brandy Station. To manage the pain, many soldiers turned to opium when laudanum failed to provide relief.  The same as illicit drugs today, opium and opium dens, were a significant problem in the 19th century.

Opium – Part of the Chinese Culture

Many Chinese immigrants, who built the railroads and mined for gold in the U.S. from the early to mi-19th century, smoked opium and frequented opium dens back home in China. They brought opium with them to the U.S.

The first opium dens opened in San Francisco's Chinatown during the 1840s and 1850s. These opium dens, run by Chinese immigrants, supplied the drug and prepared it for Americans. Its use soon spread across the west.

In China, people from all classes of society visited opium dens. The lavishness or simplicity of the dens coincided with the financial status of the patrons. In big cities, especially on the West Coast, the dens rivaled the best to be found in China, with opulent decor and trappings as well as gorgeous female attendants. For the working class, there were lots of low-end dens with meager furnishings. Non-Chinese smokers often found themselves in the poorer dens.

How Opium was Used
The dens kept a supply of the paraphernalia needed to smoke opium, such as specific pipes and lamps. Patrons reclined on beds in order to hold the long opium pipes over oil lamps that heated the drug until it vaporized, allowing the smoker to inhale the vapors.

Who were some of the Famous People Who Used Opium in the 19th Century?
Thomas Jefferson took opium for a medical condition. It’s not known when Jefferson first agreed to use opium for medical reasons, but we do know that once he began, he used it regularly. Jefferson refused opium on his deathbed, however, saying to his doctor, “No doctor, nothing more.” He died calm and with a clear mind.

In one of Jefferson’s medicinal journals, he detailed the formula given to him to make laudanum. However, he found greater relief with opium. To ensure he had a continual supply of the drug, Jefferson grew white opium on his plantation at Monticello. They continued to grow the plants until 1992, stopping due to the management’s concern about possible legal issues.

Mary Todd Lincoln suffered from agonizing migraines for most of her life. Along with liberal quantities of wine, Mary took paregoric, an opium product, to relieve the pain. She also used laudanum for her headaches and to help with childbirth.

After Abraham Lincoln's assassination, Mary’s opium use increased and grew more dangerous. She mixed different opium products together. Mary had mood swings between sanity and madness.

Doc Holiday used laudanum, known now as tincture of opium, to help with the pain of his tuberculosis.
Samuel Taylor Coleridge wrote popular poems such as Kublai Khan and the Rime of the Ancient Mariner, but his fame didn’t lessen his bouts of anxiety. He self-medicated with opium and laudanum. Coleridge even wrote about suffering withdrawal symptoms when he ran out, but this only glamorized the use of drugs at the time, and he implied that opium gave him the inspiration he needed to create his poetry.
Charles Dickens brought us the timeless classics of A Christmas Carol, A Tale of Two Cities, and David Copperfield. At the end of a long day of writing, he'd puff on a hookah filled with poppy latex. Moreover, he died of a stroke, which some believe might have been partially brought on by opium use.
At one time, opium was legal and highly accessible.  Many people used it, including numerous authors such as Elizabeth Barrett-Browning, Lord Byron, Wilkie Collins, George Crabbe, John Keats, Percy Bysshe Shelley, and Walter Scott.

Opium Use by Amputees after the Civil War

The Civil War era ushered in a new level of medical innovation and knowledge. One chief development was the implementation of anesthetics and painkillers.

Morphine, an analgesic derived from opium was used as a painkiller and sedative. The Union Army dispensed about 10 million opium pills to its soldiers, plus 2.8 million ounces of opium powders and tinctures. An unknown number of soldiers returned home addicted, or with war wounds that opium relieved. The phenomenon known as “army disease”, or drug addiction in war veterans resulting from medications used during the war, is commonly believed to have originated during the Civil War, affecting hundreds of thousands of Union and Confederate soldiers.

Addiction to Opium
One author who wrote candidly about both the pleasures and pains of opium use was Thomas de Quincey. His Confessions of an English Opium-Eater was first published in the London Magazine in 1821. He wrote of horrendous nightmares he encountered while trying to break his opium habit, which had increased as he got older. The transition from a nightmare to waking and seeing his children at the side of his bed was such that he wept.

But even with Quincey’s writings, the concept of addiction was not understood at this time and it was not until the late 19th century that people fully appreciated the horror associated with habitual use and withdrawal.

By 1895, morphine and opium powder led to an addiction epidemic that affected roughly 1 in 200 Americans. Through the last decades of the 19th century, many physicians set up profitable sanatoriums to treat these patients.

Opium left a generation of patients struggling with addiction, leading to attitudes about drug use, treatment, and “worthy” and “unworthy” addicts that remain with us today.

Thank you for reading the post on opium and its use in the 19th century. Please feel free to comment!

Nate’s Destiny, book six in the MacLarens of Boundary Mountain historical western romance series is available through these online retailers. 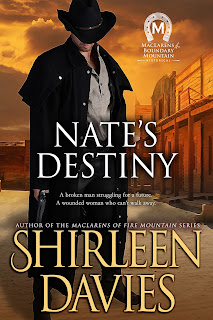