The Strange Tale of The Iron Mountain Baby by Bea Tifton

In 1902, William Helms was a 72 year-old Civil War veteran living in Hopewell, Missouri with his 51 year-old wife, Sarah. Although some, including William’s descendants, say William was bringing his horses to water in the Big River, most sources say William was looking for scrap wood near the railroad track to finish his shed when he heard something squeaking in distress. He followed the sounds to a valise near the Big River along the St. Louis, Iron Mountain and Southern Railway, later to be called the Missouri Pacific Railroad. He found a five day old infant stuffed into a valise with baby clothes and a spool of black thread. The general theory is that someone threw the valise off the train intending to hit the river, and missed. Later some railroad workers would remember a young woman with a valise who seemed very distressed.
The baby was relatively unscathed except for a slight wound on his head and an injured leg that would give him a limp for the rest of his life. William took the baby back to his wife and she nursed him back to health and insisted the couple raise him as their own. They named him William Moses Gould Helms. William, after the man who saved his life, Moses, after a baby who was also found in the reeds, Gould, after the railroad baron, Helms.  Quite a big name for such a small baby.
The press soon got wind of the story when a local minister named John Barton wrote a 14 stanza song called “The Iron Mountain Baby.”  The Helms were flooded with visitors, including one mysterious young woman in black who sadly kissed the baby on his forehead and slipped away. One woman tried to claim him but could not provide any proof of maternity so the Helms held firm and raised him as their own son, eventually formally adopting him. Notoriety followed William his entire life, although his descendant said William did not like being so well known.

William worked as a newspaper printer throughout high school in Hopewell, then attended what is now Missouri State University in Springfield. The railroad covered all his tuition and other college expenses. He became a newspaper editor in Fair Grove, Missouri after college and caused a minor sensation when he left town for no apparent reason. In 1933 he married and moved to Houston, Texas, where he lived until his death at the age of 50 in 1953. He was buried in Hopewell near his parents and close to where he was originally found. 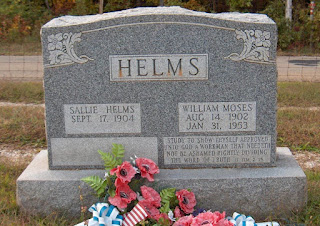 The version of “Iron Mountain Baby” that people sing now is thought to have been altered from the original. Notice a couple of the details are off. The baby was William Moses, not William Rosco, he was found by William Helms, and it was the number four train. "The leaves" refers to the valise.

The lyrics of “The Ballad of the Iron Mountain Baby” are as follows:
I have a song I'd like to sing
It's awful but it's true
About a baby, thrown from a train
By a woman, I know not who.
Th' train was running at full speed
T'was northbound number nine
An' as it crossed th' river's bridge
She cast it from the door.
A Mother unkind, a Father untrue
And yet, I'm bound to say
It must have grieved that Mother's heart
To cast her baby away.
The leaves in which this baby was found
Was fourteen inches long
Five inches wide, six inches deep
An', O, so closely bound.
It was Bill Williams who found this babe
He heard its helpless cry
He took it to his loving wife;
She would not let it die.
She bathed and washed its little head
An' soon, it hushed its cry
God bless them both while they live
God bless them when they die.
We'll name him William Roscoe
Because he has no name
Then, if he grows to be a man
He'll wear it just th' same.
This ends my song, my story I've told
I'll say, goodbye to all
Until we meet around the throne
In that bright world above all.