John Moses Browning, sometimes referred to as the “father of modern firearms,” was born January 23, 1855 in Ogden, Utah to Jonathan and Elizabeth Child Browning. Elizabeth was one of Jonathan's three wives and John Moses one of his father's nineteen children. Many of the guns manufactured by companies whose names evoke the history of the American West-Winchester, Colt, Remington, and Savage-were actually based on John Moses Browning’s designs.


http://Getbook.at/blessingWOWR. The first book, PRISCILLA, by Charlene Raddon, will be released September 15, after which new books will be released every two weeks through spring. Series coordinator Charlene has designed all the covers for the series. 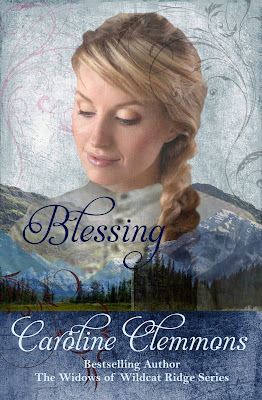 worked in his father's Ogden shop from the age of seven, where he was taught basic engineering and manufacturing principles, and encouraged to experiment with new concepts. He is said to have created his first gun in his father’s shop when he was–depending on the whose report is referenced—ten or thirteen or fourteen. Allegedly, this gun was made for his brother Matthew.

The year 1879 was eventful for the Browing family. Jonathan Browning died on June 21 and, soon thereafter, John Moses and his brothers started their own shop. They first used steam powered tools, tools that were originally foot-powered but were converted by John Moses to get power from a steam engine.

The year 1879 was also the receipt of his first gun patent for the Breech-Loading Single Shot Rifle. He was twenty-four at the time and this was the first of his 128 patents during his lifetime.

John and his brothers began producing this rifle in their Ogden shop but customer demand soon exceeded their shop's production capacity. They were unable to expand their Browning Gun Factory because they lacked the capital required. Although John Moses Browning was very satisfied with the sales of his guns he was also very unhappy that the production chores and the daily work prohibited him from working on his new ideas.

A salesman for the Winchester Repeating Arms Company named Andrew McAusland happened to see one of John's Single Shot rifles in 1883. McAusland immediately bought one and sent it to Winchester's headquarters. The gun drew Winchester's interest and T. G. Bennet, Winchester's vice president and general manager, went to Ogden to buy the rights to Browning's gun. When Bennet arrived in Ogden, it didn't take long for the men to agree on the sale and Winchester paid John Moses $8,000 for the rights to produce the gun.

The agreement was beneficial to both parties. Winchester was happy because they turned competitor into a benefactor, plus they added an excellent rifle to their product line. John  was equally happy because the money from the sale and the ensuing relationship with Winchester allowed him to concentrate on inventing things instead of manufacturing them.

John Browning was usually working on more than one project at one time. He started working on automatic pistols before 1900. He was the first to invent the slide which encloses the barrel and the firing mechanism of a pistol. Pistols of his invention were produced by both FN and Colt and they range from baby .25 caliber pistols to the .45 Government Model. The first automatic pistol designed by Browning was produced by FN as FN's .32 caliber Model 1900. The most famous pistols of John's design, however, were Colt's .45 ACP M1911 Government Model and FN's Browning High-Power Model P-35 in 9mm Parabellum.
Winchester manufactured several popular small arms designed by John Moses Browning. For decades in the late 19th Century-early 20th Century, Browning designs and Winchester firearms were synonymous and the collaboration was highly successful. This came to an end when Browning proposed a new long recoil operated semi-automatic shotgun design, a prototype finished in 1898, to Winchester management, which ultimately became the Browning Auto-5 shotgun.
John designed the lever action Winchester Model 1887 and the Model 1887 pump shotgun, the falling-block single-shot Model 1885, and the lever-action Model 1886, Model 1892, Model 1886, Model 1892, Model 1894, Model 1895 rifles as well as the long recoil operated semi-automatic Remington Model 8 rifle, many of which are still in production today in some form; over six million Model 1894s had been produced as of 1983, more than any other sporting rifle in history.
He is regarded as one of the most successful firearms designers of the 19th and 20th centuries, and pioneered the development of modern automatic and semi-automatic firearms. Impressed by the young man’s inventiveness, Winchester asked Browning if he could design a lever-action-repeating shotgun. Browning could and did, but his efforts convinced him that a pump-action mechanism would work better, and he patented his first pump model shotgun in 1888.
Browning’s manually-operated repeating rifle and shotgun designs were aimed at improving  the speed and reliability with which gun users could fire multiple rounds-whether shooting at game birds or other people. Lever and pump actions allowed the operator to fire a round, operate the lever or pump to quickly eject the spent shell, insert a new cartridge, and then fire again in seconds.
As was the custom of the time, Browning's earlier designs had been licensed exclusively to Winchester (and other manufacturers) for a single fee payment. With this new product, Browning introduced in his negotiations a continuous royalty fee based upon unit sales, rather than a single front-end fee payment. If the new repeating shotgun became highly successful, Browning stood to make substantially more fee income over the prior license fee arrangements. Winchester management was displeased with the bold change in their relationship, and rejected Browning's offer.
Remington Arms was also approached, however the president of Remington died of a heart attack as John waited for his answer. Remington would later produce a copy of the Auto-5 as the Model 11 which was used by the US Military and was also sold to the civilian market.
John packed a sample of his shotgun into his luggage, crossed the Atlantic, and negotiated an agreement for Fabrique National de Belgique (FN) to produce his gun. He couldn't do that today, of course, but FN was then a young company in dire need of products to produce. Browning's automatic shotgun revolutionized the hunting market.This same shotgun was later produced in U.S.A. by Remington, as their Model 11. Still later, variants of this shotgun were produced by almost all of the large shotgun manufacturers, including Savage, Franchi, and Breda.
Having recently successfully negotiated firearm licenses with Fabrique Nationale de Herstal of Belgium (FN), Browning took the new shotgun design to FN; the offer was accepted and FN manufactured the new shotgun, honoring its inventor, as the Browning Auto-5. The Browning Auto-5 was continuously manufactured as a highly popular shotgun throughout the 20th century.
Browning influenced nearly all categories of firearms design. He invented, or made significant improvements to, single-shot, lever-action, and pump-action rifles and shotguns. His most significant contributions were in the area of autoloading firearms. He developed the first reliable and compact autoloading pistols by inventing the telescoping bolt, then integrating the bolt and barrel shroud into what is known as the pistol slide. Browning's telescoping bolt design is now found on nearly every modern semi-automatic pistol, as well as several modern fully automatic weapons.
He also developed the first gas-operated firearm, the Colt-Browning Model 1895 machine gun — a system that surpassed mechanical recoil operation to become the standard for most high-power self-loading firearm designs worldwide. He also made significant contributions to automatic cannon development.
By the late 1880s, Browning had perfected the manual repeating weapon. He wanted to make guns that fired faster, but that would require eliminating the need for slow human beings to actually work the mechanisms. Browning discovered the answer during a local shooting competition when he noticed that reeds between a man firing and his target were violently blown aside by gases escaping from the gun muzzle. He decided to use the force of that escaping gas to automatically work the repeating mechanism. 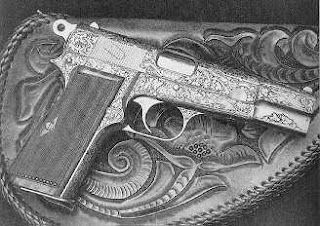 Browning began experimenting with his idea in 1889. Three years later, he received a patent for the first crude fully automatic weapon that captured the gases at the muzzle and used them to power a mechanism that automatically reloaded the next bullet. In subsequent years, Browning refined his automatic weapon design. When U.S. soldiers went to Europe during WWI, many of them carried Browning Automatic Rifles, as well as Browning’s deadly machine guns.
Among Browning’s most-famous designs were the Winchester Model 1886 lever-action rifle, the Remington Model 1905 semiautomatic shotgun, and the Colt Model 1911 semiautomatic pistol.

The Browning automatic rifle was adopted by the U.S. Army in 1918 and used until the late 1950s. From about 1920 until the 1980s the U.S. armed forces used Browning-designed automatic and semiautomatic weapons almost exclusively, including the .45-calibre Model 1911 auto-loading pistol; the Model 1918 .30 calibre Browning automatic rifle (BAR); crew-served .30- and .50-calibre machine guns, in several variations and modifications for air, naval, and land use; the .45-calibre auto-loading pistol; and the 37-mm automatic aircraft cannon.

The first two arms saw regular U.S. issue over 40 and 75 years, respectively. In the 21st century, improved variants of those military weapons remained in use around the world.
The premium priced Browning Superposed shotgun, an over-under shotgun design, was his last completed firearm design and possibly his most elegant. It was marketed originally with twin triggers; a single trigger modification was later completed by his son, Val Browning. Commercially introduced in 1931 by FN, Browning Superposed shotguns, and their more affordable cousins, the Browning Citori made in Asia, continue to be manufactured into the 21st century, and come with varying grades of fine hand engraving and premium quality wood.
John Browning was known as a dedicated and tireless innovator and experimenter who sought breakthrough consumer-oriented features and performance and reliability improvements in small arms designs. He did not retire from his career in his later years, but dedicated his entire adult life—literally to his last day—to these pursuits. On November 26, 1926, while working at the bench on a self-loading pistol design for Fabrique Nationale de Herstal (FN) in Liege, Belgium, he died of heart failure in the design shop of his son Val. Even the 9 mm semi-automatic pistol he was working on when he died had great design merit and was eventually completed in 1935, by Belgian designer Dieudonne Saive.

During a career spanning more than five decades, Browning’s guns went from being the classic weapons of the American West to deadly tools of world war carnage. Amazingly, since Browning’s death, there have been no further fundamental changes in the modern firearm industry.
Sources:
https://www.m1911.org//browning.htm
https://en.wikipedia.org/wiki/John_Browning
https://www.britannica.com/biography/John-Moses-Browning
https://www.history.com/this-day-in-history/gun-designer-john-browning-is-born 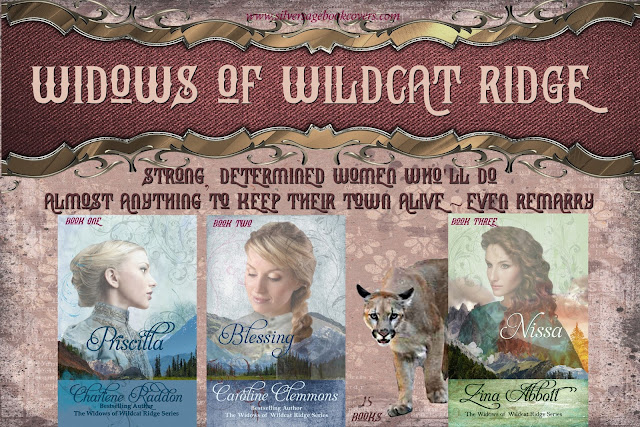