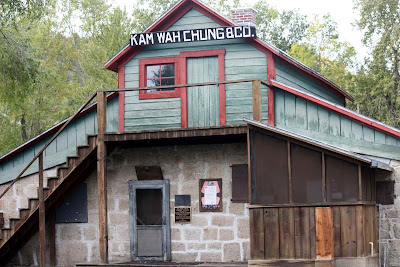 Among the many Chinese immigrating to Oregon were two particularly interesting men, Ing Hay and Lung On. Together, they opened a business in John Day where Ing Hay, known there as Doc Hay, practiced medicine, and they began an apothecary and general store known as Kam Wah Chung (Golden Flower of Prosperity) from 1887 to 1948. These were men who lived lives bigger than many will ever know. Their stories should not be forgotten. 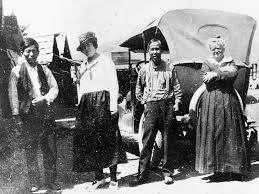 Ing Hay to the left; unknown woman; Lung On; and unknown woman
Exactly from where their partnership originated is not known- at least not by my research. Its impact on Oregon is shared today in a museum in John Day, which includes the original building where they lived, worked, and helped others. Kam Wah Chung was left to the community in Ing Hay's will.

Born in 1862, Ing Hay came from China, Guangdong Province, leaving behind a wife, son and daughter. He arrived first to Washington, before heading to John Day in 1887, perhaps drawn by the sizeable Chinese population in Eastern Oregon. 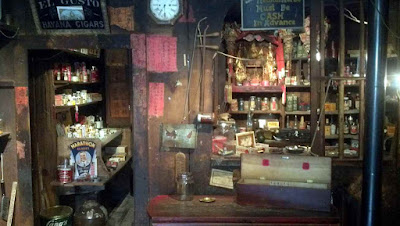 He had learned and practiced a Chinese method of diagnosis and treatment of illness known as pulsology. The patient would sit in a chair, in what was the entrance, where he would study them. Once he decided on the ailment, he prescribed herbal treatments, which he also sold.  Using traditional methods and what seems to have been a natural gift for diagnosis, he eventually ended up with more non-Chinese clients than Chinese when many Chinese left the area when mining for them petered out. 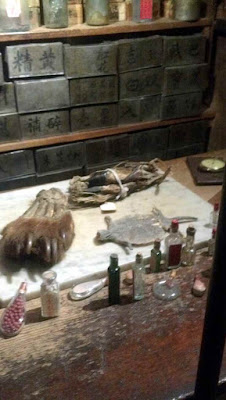 There are many stories about his success with sick patients, where Western medicine had failed. We heard some when we visited the museum and took a tour with an informative guide.

One such story was when a highway construction crew in 1919-20 was struck by the deadly influenza that killed so many, he successful administered his tinctures and herbs. The results led to the spreading of his reputation as a healer. Patients came from Portland, other states, and even Alaska. One was reportedly the daughter of a senator. Other Chinese herbalists visited to learn his methods. It is said he could treat blood poisoning, frostbite, Rocky Mountain spotted fever, infertility, STDs, typhoid fever, gangrene, appendicitis, polio, and of course the influenza. 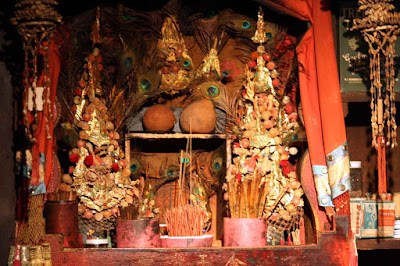 The business and their home, as well as a bunkhouse where newly arrived Chinese were permitted to stay as they adjusted to their new community, had the energy of good. You know how it is when some places feel negative but others are full of richness in a spiritual sense. This all felt blessed with kindness, beauty, and a desire to use skills to benefit others. 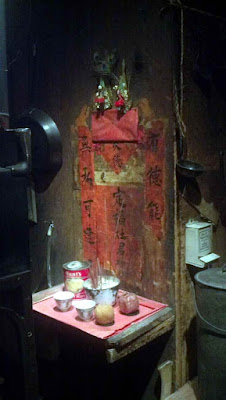 In a wok in his kitchen, Doc Hay made his own medicines. Some prescriptions contained as many as 60 herbs, which he bought from San Francisco or Hong Kong herbalists. He would steep the herbs in broth or water, pulverize, or coat with oil or honey. It is said they tasted terrible, not a big surprise if you've tried such yourself.

With doctors in Portland not happy about his growing reputation and successes, where often their treatments were less effective at that time, he was charged three times with practicing medicine without a license. Maybe because of his successes and his generosity to his community of John Day, charges were always dismissed. When he died in 1952, over $23,000 in uncashed clients' checks were found, some dated during the Great Depression. 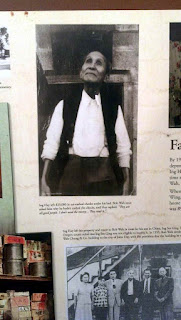 Letters from his family were also found after his death, telling of the hardships they faced. Due to the immigration Act of 1882, they would have been unable to come to be with him. It is not known whether he asked them or whether he sent help, as any reply to their letters was not found. When his business partner, Lung On, died in 1940, Bob Wah, Doc Hay's nephew, moved to John Day to apprentice with him. The Kam Wah Chung continued, as an apothecary, until Doc Hay's failing health forced it to close in 1948. He died in Portland, but his remains were buried in John Day near to those of Lung On.

His work was certainly interesting but even more so to me was the relationship between Ing Hay and Lung On. They both immigrated from China and the same Province. They were of a similar age with Lung On being born in 1863. In 1882, he immigrated to California. Five years later, he met up with Ing Hay in John Day to form their successful partnership. 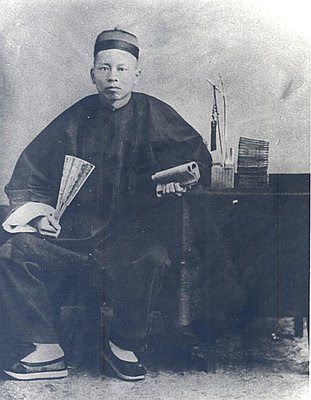 Lung On in Baker City

Although I found little about Ing Hay for his background, other than his training
as an herbalist and Chinese doctor, more is known about Lung On. He came from a prosperous Chinese family, was an educated Chinese classicists. His fluency with English and Chinese made him particularly good at business. He could interpret, translate, keep records, and be a business mentor for the Chinese in John Day. He was noted for being friendly, eventually known as Leon, and his love of gambling included horse racing.

Despite the community support, all was not peaceful for the two men as there are still bullet holes in the front door. In 1905, their store was ransacked in an unwarranted search. Lung On and two other Chinese were accused of possessing opium. A mob ordered them to leave town, but Lung On stayed and fought the issue in court where he was acquitted of any crimes. 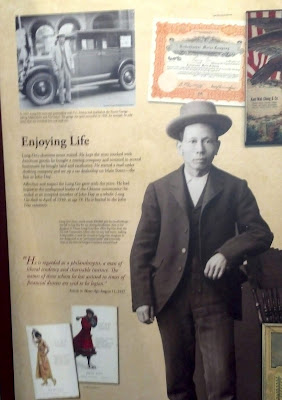 As a businessman, he was a leader in an investment group, Sze Yup Communal Organization of Eastern Oregon, which had mining interests, real estate, and labor contracting. Our tour guide said he traveled a lot with his businesses and funded much of Kam Wah Chung, allowing Doc Hay to care for those who could not afford any fee. He had a head for business, opened the first auto dealership in eastern Oregon and a service station, Tourist Garage, which only closed with his death. When he died, his estate was valued at $90,000 and was to be divided between Ing Hay and his wife and daughter who had remained in China (it is said the money never got to them). He was buried in John Day. 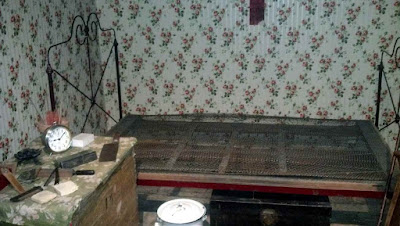 Because everything was as it had been when Ing Hay left it, we got to see the furnishings including their bedrooms. They were simply furnished in the back of the building. Each man had their own room. I could not help but wonder why these two young men left their families possibly around the same time and met up in John Day. There is no speculation that their relationship was ever romantic, but might it have been an equally strong love that bound them together for their lifetimes. It was a different time for how such loves were seen; but obviously, it was a symbiotic relationship that benefited them and the broader community.

For the most part, we tend to imagine people in history without the real diversity they had. The more we study history, the more we learn individuals can be not only interesting but also unexpected-- leaving, unfortunately for those of us who like to study human nature, a lot of secrets that will never be revealed.

If you are in John Day, Oregon, your time will be well spent at the museum and taking the tour. Kam Wah Chung feels much as if its owner just stepped out leaving things just as he'd left it for others to experience and learn more about ways other than theirs.