Last month I reported on the American candy industry from the 1800’s up to early 1900’s. Although most of us write our historical books during that time, just for fun I decided to continue the timeline with some more of the popular candy introduced throughout the 1900’s. It was interesting to find that many candy bars were first produced in European countries before they found their way to the U.S. Some popular candy bars were named after relatives, one even named after a horse! See if you can find your favorite candy! 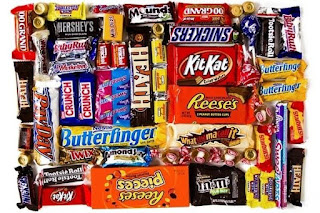 1911 My very favorite candy is the Kit Kat. Interesting to find out that the origins of what is now known as the Kit Kat brand was produced by Rowntree, a confectionery company based in York in the United Kingdom way back then. The Hershey Company’s license to produce Kit Kat bars in the United States dates from 1970, when Hershey executed a licensing agreement with Rowntree.

1921 Hershey automates its production process and Hershey’s Kisses are now machine wrapped and adorned with a small “flag” on top.

1922 H.B. Reese makes the first peanut butter candy coated with Hershey’s Milk Chocolate, which we now know as the Reese’s Peanut Butter Cup. It remains one of the best-selling candy bars of all time.

1922 The Fox Cross Candy Co. introduces the Charleston Chew which was inspired by the swinging Charleston dance.

1922 The Curtiss Candy Company was founded near Chicago, Illinois, by Otto Schnering, using his mother's maiden name. He invented the Butterfinger candy bar in 1923. The company held a public contest to choose the name of this candy.

1923 One of the first candies with a nougat center, the Milky Way Candy Bar is introduced by Mars.

1924 A candy with a sweet tabby taste, called Bit O’Honey, is introduced by the Schutter Johnson Co.

1925 The first milk chocolate bar with peanuts, Mr. Goodbar, is made by Hershey.

1928 Heath Bars, first sold only for home delivery by a dairy salesman, were mass produced. Named after L.S. Heath, the famed candy was acquired by Hershey in 1996.

1931 Tootsie Roll Pops, two candies in one, are introduced.

1932 Red Hots are introduced by the Ferrara Pan Candy Co.

1932 Mars debuts the 3 Musketeers, containing three flavors, chocolate, vanilla & Strawberry nougat. In 1945, Mars changes the formula for 3 Musketeers to one that’s all chocolate.

1936 William Luden, one of the creators of cough drops, introduces the 5th Avenue Candy Bar.

1941 M&M’s Plain Chocolate candies are introduced in response to depressed chocolate sales during the summer months. Remember, “They melt in your mouth, not in your hands!”

1954 Marshmallow Peeps in the shape of Easter chicks are born.

1969 Chupa Chup Lollipops become an art form, the famed painter Salvador Dali designing the label. He insisted the logo always be on the top of the wrapper.

1973 Hershey becomes the first candy company to list ingredients and nutritional information on the wrappers.

1980 Herman Goelitz Co. introduces the first American made Gummi Bears and Gummi Worms, which had been previously imported from Europe.

The new millennium brought many more variations of favorite candies with new flavors and packaging. However, it was during the first half of the 20th century in the United States alone that 40,000 different candy bars appeared on the market and was the high point of the candy bar industry.