Risk and reward, boom or bust: essential to our concept of the Western frontier. The possibilities were endless, but the risks were great and the rewards never guaranteed. For families like the MacLarens (from my newest series MacLarens of Boundary Mountain), settling in a boomtown like Conviction was the ultimate payoff for an arduous, risky journey. Of course, our hero Colin MacLaren wants more out of life than to live in a nice, stable, thriving town, but more on him later…

Boomtowns sprung up across the United States during the rapid growth of the 19th century. Adventurous travelers and those seeking a better life were drawn to a bourgeoning town for opportunity. Their presence helped the economy grow, more people were drawn to the town, and the growth cycle continued.

Gold rush fever was responsible for many 19th century boomtowns, some of which remain stable economies to this day. Even Denver, Colorado and San Francisco were once new, exciting western boomtowns. Conviction, the setting for the MacLarens of Boundary Mountain series, was inspired by two real towns first settled in the 1850s. Together they formed a bustling metropolis with a strong economy.

Marysville and neighboring Yuba City, both in northern California on the Feather River, owe their early development to the promise of gold. Marysville became one of the largest cities in California within a decade of being incorporated in 1851. Its location was prime for a commercial center to serve thousands of gold miners. By 1857 it had a population nearly ten thousand strong, and a full, diverse economy of different industries and a rich community of people. Across the river, Yuba City benefited from the same travel routes and quietly thrived on a smaller scale, eventually becoming the county seat of Sutter County, California.

Marysville’s growth came to an essentially permanent halt when Feather River became impassable by riverboats. However, they never met the dreaded fate of so many other western boomtowns. They never went “bust.”

Boomtowns are defined as much by their growing pains and potential for failure as they are by initial growth and success. Because these towns grew so rapidly, growth was often unsustainable. Many towns never caught up to their long-term needs and went “bust” after a period of tenuous prosperity. This was an all-too-common tale that has resulted in the American West being dotted with abandoned “ghost towns.”

Bodie, California is an eerily well-preserved ghost town in northern California. It enjoyed its clandestine boom in the 1870s and 1880s thanks to the discovery of gold. At its peak, Bodie boasted 65 saloons along its main street, a population of around 7,000 people, newspapers that published several times a week, a red light district, volunteer fire fighters, and even a local brass band.

Bodie’s sudden decline occurred when more promising mining towns like Butte, Montana and Tombstone, Arizona lured off most of the miners. The people who remained in Bodie were families. The town’s economy and population never recovered. By 1920, scarcely over one hundred people called Bodie home. In 1942, the last gold mine closed. In1961, the town was designated a National Historic Landmark and has been maintained as such ever since, in a state of “arrested decay.”
These narratives were essential to the tone of life in the American West. Towns boomed and busted. Families settled and created stable lives, all the while aware the economy could turn with little notice. It took special people with an adventurous nature and never quit attitude to take the extreme changes in the western frontier.

If you were in a position to change your life, uproot your family for a dream, would you do it? Would you believe in your heart, as the MacLarens did, that there was more to life and greater opportunity hundreds or thousands of miles away? If so, what would you give up to secure it?

Colin’s Quest, Book One in the MacLarens of Boundary Mountain centers on a family facing the very real threats and opportunities of traveling across country to start a new life in the frontier. 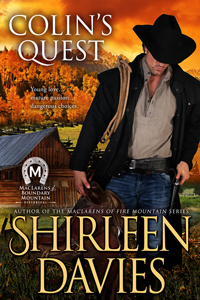